How Do You Compose? 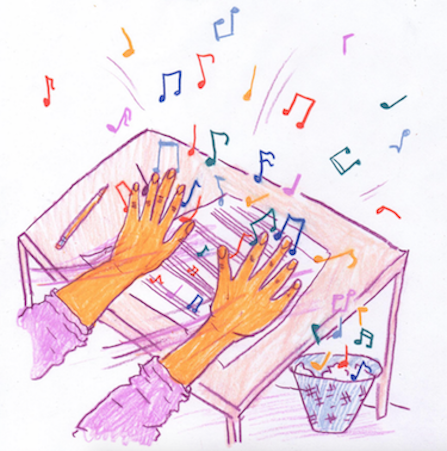 By throwing everything out, that’s how. Anyway, that’s the answer I don’t give when I’m asked how I compose. Though it’s true, it sounds facetious, so here’s a recent example, if only to defend myself against the charge of flippancy.

I’d never written a theme song, but was kicking around an idea for a new top-of-the-hour 30-second station I.D. at WRTI, the radio station where I work. It had previously been the spoken text alone, the wonderful voice of Dave Conant. We were thinking of bringing in different voices—women’s, other men’s, non-prime-time announcers—and rotating them with the existing one.

When we started Discoveries from the Fleisher Collection (scroll to movement 3 at the link) 15 years ago, I took music from my one symphony and made it the theme. Nine years ago, I did the same with a four-guitar piece when Now Is the Time hit the air. But I’d never composed a theme song from scratch.

Since we’re a dual-format station of classical music and jazz, I thought I’d meld the two into one theme. A piano would serve both, as it’s natural in both. But something else made me choose piano as the foundation for this. I couldn’t ask the station to pay for my experiment by hiring an orchestra, so I’d generate all the music from my computer. The sounds are pretty good, sampled from live instruments, but not as good as the real thing. And of all the samples, the piano, to my ears, sounds more natural than most.

So, I could have a pianistic flourish, peppy to get your attention, but not jarring. Over jazz chords I’d bring in a saxophone—no, a clarinet, also at home in both worlds—for a languorous denouement. A soft background string orchestra would be the combining agent. A little offbeat, with plucked strings for rhythmic punch, a little sweet, and in 30 seconds wrapped up. Here’s what it sounds like.

Not bad, I thought, but after a day or two I hated it. It sounded like a ’70s sitcom, one where the kids fight over who threw the football into the tree, and the car blows a tire on the way to the campground, but everything ends up just fine. It was cute and nothing more. I got to the point where nothing I tried worked. I never got to any interesting chords, the punctuating piano was jarring, and the clarinet never did do anything. It was a boring mess.

So, I threw everything out. Taking out the garbage is one of composing’s most important tactics, although it never feels like a tactic when you’re doing it. It feels awful. Much of the time, awful is what writing music feels like.

Our production manager, a radio guy from way back, got me on track. I played it for him, he listened, and shook his head. “Don’t do a theme. Do a signature.”

He was right. I went back and the only thing I kept was the key of D. I made a halo of strings: a D-major chord. My first thought for this signature was to spell out the chord from top to bottom: A-F#-D, but I figured the triad was merely a placeholder. I had that high string halo and the piano picking out the chord. As soon as that ended I landed on a G-major chord, that old standby, the subdominant of D. Now I had drama. I intensified it by keeping the strings resolutely on D major and repeating the signature triad.

From there, I just nudged the bass line along. Following my ear, I moved the G to B. Each bass move was preceded by a ta-dum (I added a soft bass drum and plucked double bass notes). B went to C#, grinding low against the D major, every bass move coupled with corresponding notes thrown into the halo.

The tension increased. The bass C# hopped over the D to E, then hopped again up to G, an octave above where it started. I didn’t think about chords, let alone jazz chords, at all. I just increased the pressure. After 21 seconds, it was time to resolve, so the bass finally settled from G to D, under a slow repeat of the signature.

Funny thing is, I never did change the triad, never made it “more interesting.” I ended with a soft bloom of brass: three trombones and a tuba. The piano rolled out a final D major, and I snuck a lone B into the violins. If you’re keeping score at home, that’s an add-6 chord.

There was one more addition, which you may have heard. When I overlaid it with the voice, I felt it needed more sparkle, so I picked out details with a harp. I also had it click the beat softly throughout, and had the piano hit the offbeat kicks a little harder. I adjusted volumes for inner voices. The final, with Dave’s fantastic voice, sounds like this.

It’s mixed differently for airtime and for different voices, and we deleted the “also available in HD,” which is old news. It was a fairly ridiculous idea to meld (whatever that means) classical (whatever that means) and jazz (ditto). Get people’s attention, don’t annoy them, work the music, don’t get in the way of the voice, create tension and release, and work, work, work the music. That’s how I compose.

And when I don’t, every once in a while, I throw everything out.