O Thou Who Camest from Above 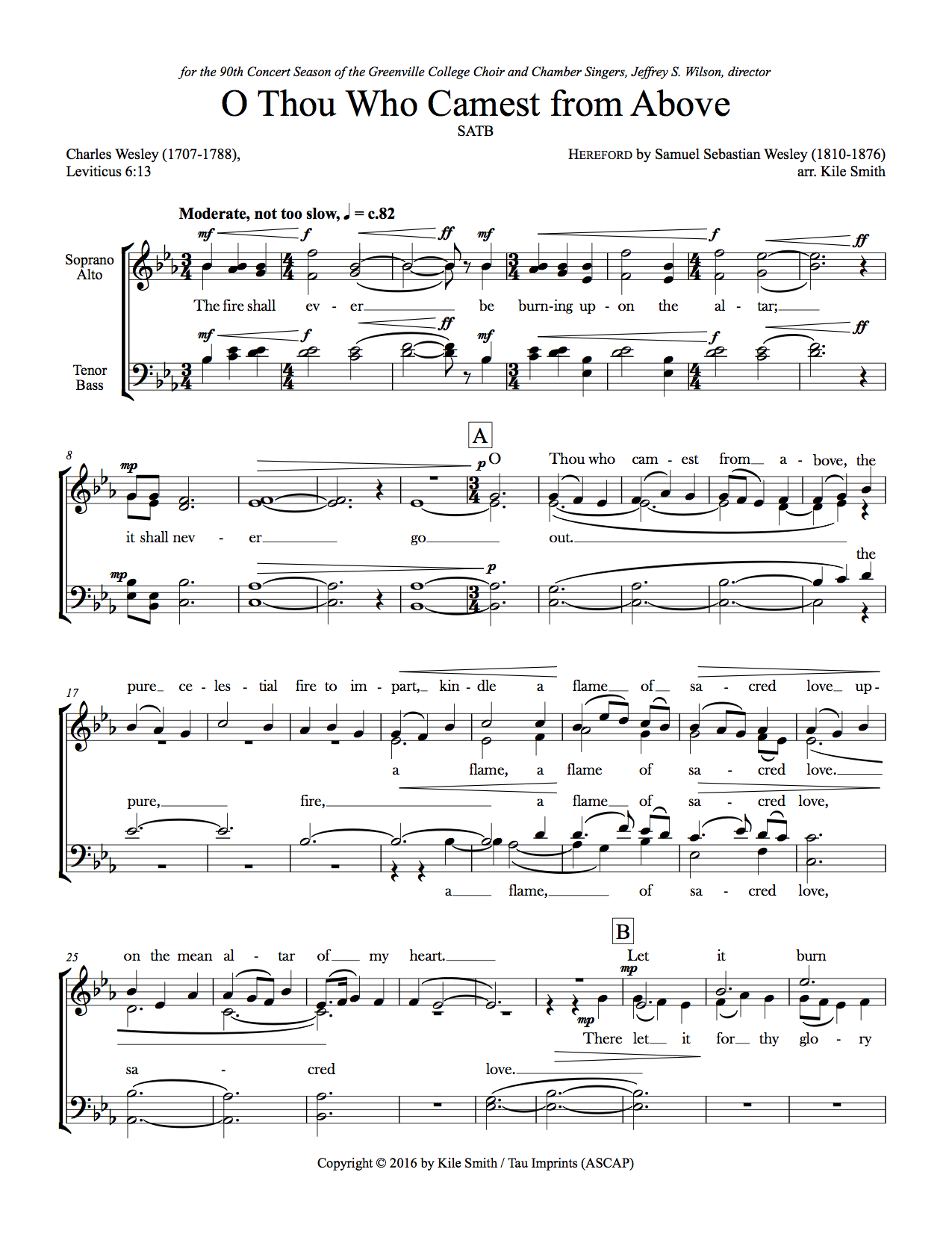 O Thou Who Camest from Above. SATB, 4 ‘. Commissioned for the 90th Concert Season of the Greenville College Choir and Chamber Singers, Jeffrey S. Wilson, director. The tune is Hereford by Samuel Sebastian Wesley (1810-1876), the text is Leviticus 6:13 and the hymn by Charles Wesley (1707-1788), is based on the Leviticus verse.

In April 2016 I was the guest composer for the Greenville College Schoenhals Fine Arts Symposium in Greenville, Illinois. At the end of my few days’ residency there, during which I taught classes and heard performances of works of mine, the chair of choral activities Jeffrey Wilson asked me if I would be interested in composing a work for their annual choir tour. They tour every year, and in 2017 they would be coming to Philadelphia and the East Coast, as it happened, during their 90th concert season.

I was happy to be asked to write for his excellent choir. Greenville is a Free Methodist university (previously a college, they received university status on 1 June 2017), and Jeff wondered if I might like to arrange this work by the great Methodist hymnodist Charles Wesley, set to music by Charles’s grandson Samuel Sebastian Wesley. I did not know the hymn but immediately liked both words and music, the tune Hereford.

Noting that the hymn was an application of one verse from Leviticus, I decided to set that verse as well, using it to open and close the arrangement. While setting those words, I only then noticed the assonance of its final words “go out” with the opening of the hymn, “O Thou,” so that explains the musical overlapping. To transition back to Leviticus at the end, I added the “Amen,” which in earlier generations ended the singing of every hymn.

Written for a college choir of about three dozen singers, this is of moderate difficulty and workable for any church choir with balanced sections.

[Here is the Greenville College Choir singing it at the WRTI studios, stopping by on 17 March 2017 to rehearse some of their tour concert. Jeffrey Wilson conducts:]

The fire shall ever be burning upon the altar; it shall never go out.
—Leviticus 6:13

O Thou who camest from above
The pure celestial ﬁre to impart,
Kindle a ﬂame of sacred love
On the mean altar of my heart!

There let it for Thy glory burn
With inextinguishable blaze;
And trembling to its source return,
In humble prayer and fervent praise.

Jesus, conﬁrm my heart’s desire
To work, and speak, and think for Thee;
Still let me guard the holy ﬁre,
And still stir up Thy gift in me.

Ready for all Thy perfect will,
My acts of faith and love repeat,
Till death Thy endless mercies seal,
And make the sacriﬁce complete. Amen.
—Charles Wesley (after Leviticus 6:13)