Rejoice in the Lamb

To Dr. John H. French, on the 25th anniversary of his ministry as organist/choirmaster of The Church of the Holy Trinity, Rittenhouse Square, Philadelphia. Premiered 2 July 2017.

Live recording of the premiere: 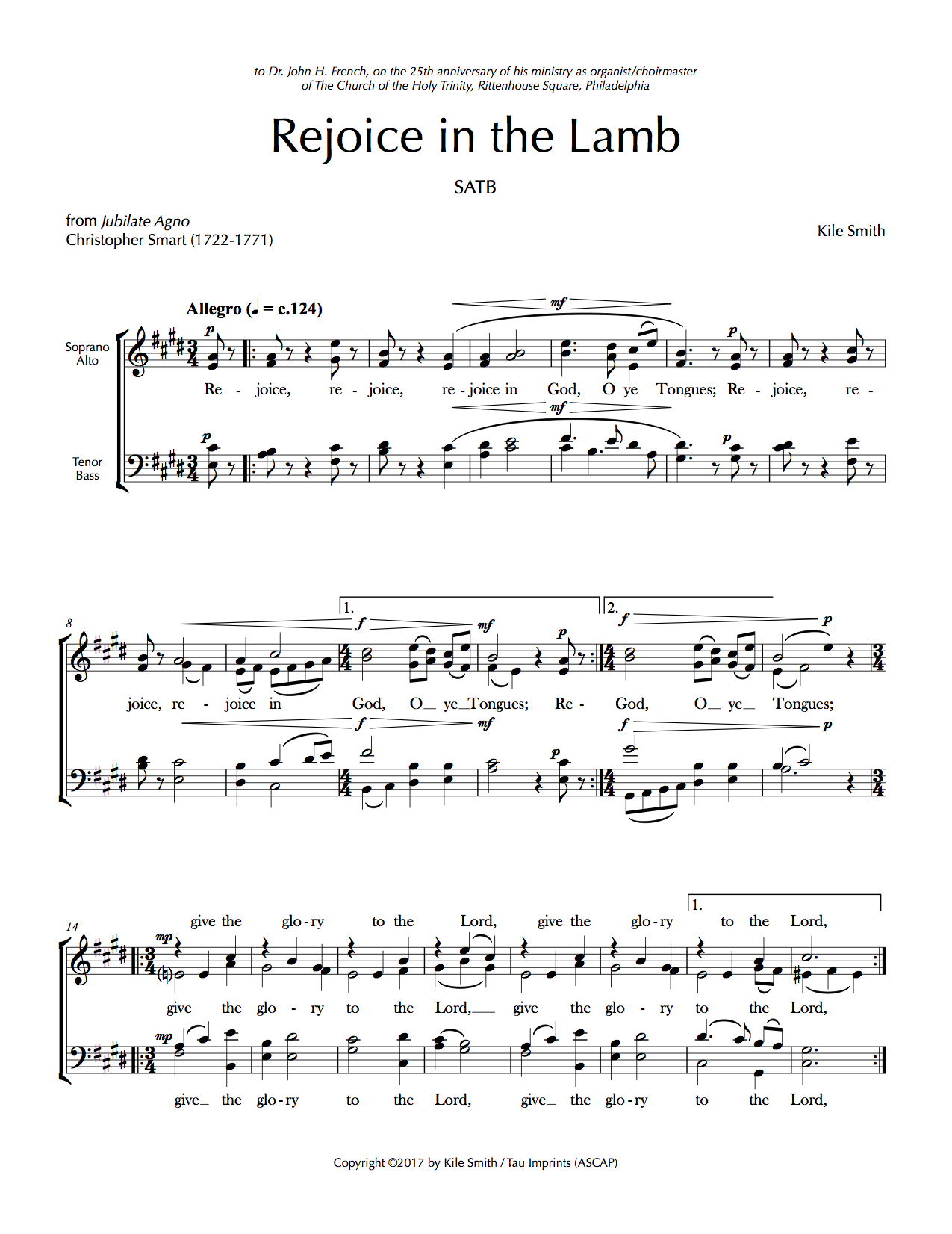 Using the same title as the Benjamin Britten 17-minute cantata, and using words from the same monumental Christopher Smart poem, Jubilate Agno, that Britten used, this is a 5-minute a cappella anthem or concert work. The first two lines of my setting (text below) are also in Britten’s, but the other two lines are not. John French had asked if the Britten work, which he loves and has often conducted, could possibly inspire another setting, and so I looked closely at Britten’s piece, and then Smart’s original poem.

After long consideration—the poem is huge—the text began to take shape around the occasion I was asked to celebrate, French’s 25 years as organist and choirmaster at one of the great churches of Philadelphia, and a landmark on Rittenhouse Square, The Church of the Holy Trinity.

Smart was a profoundly pious man, and that did not make his life a smooth one. Taken to falling on his knees in the street and praying, he was viewed as unstable and was committed first to a mental asylum and then to a debtors’ prison. He wrote part if not all of Jubilate Agno in confinement.

The life of this poet and the circumstances of this poem colored the music’s character. The shifting between E major and a parallel mode of A lydian came out of this. I thought that the halting, almost-too-sweet “Give the glory to the Lord” was appropriate, as were the repeating Hallelujahs, driving to an ecstatic proclamation at the end.

I have been Holy Trinity’s resident composer since 2013, fortunate to have most of my anthems and another commission sung in that historic church. Among the distinguished leaders who have served there are the rector Phillips Brooks and the organist Lewis Redner, who created “O Little Town of Bethlehem” at that church for a Sunday School class in 1868. John French serves as the descendant of Redner, organist Robert Elmore, and many others who were dedicated to the spiritual growth of the congregation and the integrity of the music they produce, just as they are descended from Asaph of the Psalms, “the musician of the Lord.”

Rejoice in God, O ye Tongues; give the glory to the Lord, and the Lamb.
Hallelujah from the heart of God, and from the hand of the artist inimitable.
For a NEW SONG also is best, if it be to the glory of God; and taken with the food like the psalms.
Let Asaph rejoice with the Nightingale—The musician of the Lord! and the watchman of the Lord!
—Christopher Smart (1722-1771)