Reformation and Mendelssohn and Bach 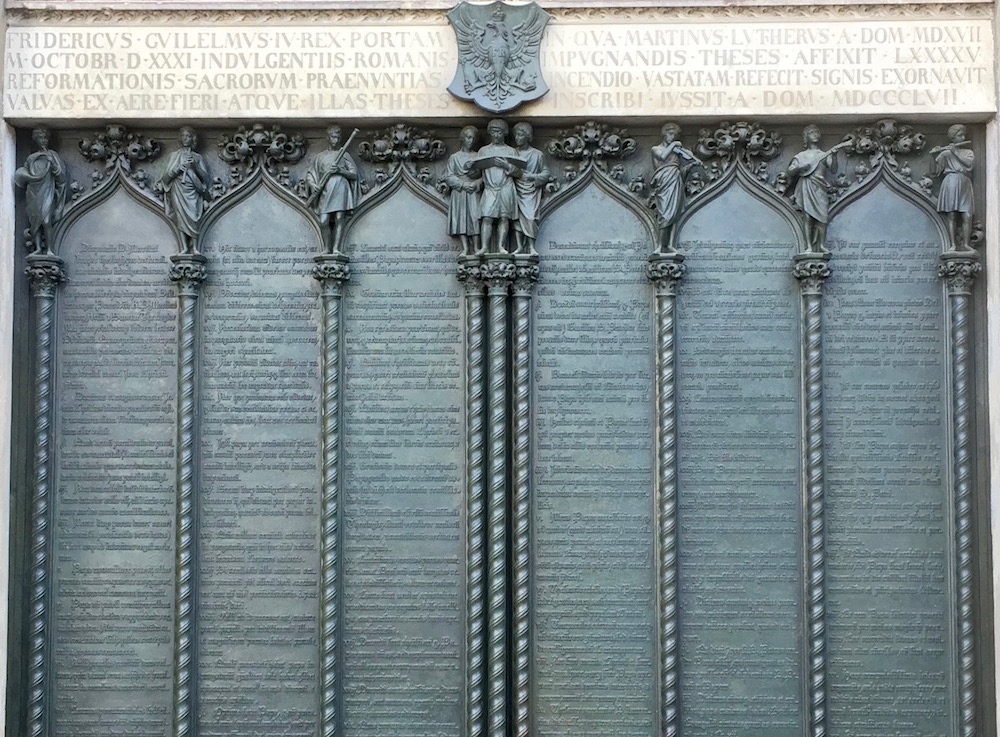 Detail of the door of the Castle Church, Wittenburg

Anniversaries bump into each other on this Discoveries from the Fleisher Collection, Saturday at 5 pm on WRTI. It’s year 500 since the beginning of the Reformation, almost to the day, when Martin Luther posted 95 theological and ecclesiastical points he wished to debate with all comers. Nobody dared to take him up on it, but from the door of the Wittenberg Castle Church in 1517 a revolution in religion, humanism, freedom, and language swept across the world. And it was accompanied by music.

The dust was far from settling in 1530 when the “Lutherans,” as they were being called, put together a meticulously reasoned defense of what they believed, and presented it to Charles V, the Holy Roman Emperor. They wrote it in Augsburg, so this Augsburg Confession became a founding document of Lutheranism, and by extension, a pivotal moment for what would become Germany. In 1830, the 300th anniversary of that Confession, celebrations took place throughout Germany, particularly in Augsburg itself.

Felix Mendelssohn had already begun composing a celebratory symphony for this in 1829. But because of illness and touring, he missed the deadline. He had offered a version of it to Augsburg, but the city turned it down. A Paris orchestra also demurred. Mendelssohn finally completed it and conducted the premiere in 1832, in Berlin.

He placed into the symphony’s beginning what is known as the “Dresden Amen,” a bit of liturgical music known well in both Catholic and Lutheran churches. Wagner would later quote it in Parsifal and elsewhere. But Mendelssohn put the big statement of the Reformation—its national anthem, you might say—in the last movement. Martin Luther’s music for his own versification of Psalm 46, “A Mighty Fortress Is Our God” (Ein feste Burg ist unser Gott) receives a grand treatment from Mendelssohn. He later didn’t care for the youthful work, but after his death this second symphony of his was discovered and listed as No. 5.

The 80th in the catalog of cantatas by Johann Sebastian Bach uses the same Luther tune, but it took a while to reach the form we now know. This “Ein’ feste Burg” Cantata was used in Leipzig, where Bach lived from 1723 until his death in 1750. But he actually wrote much of the music when he was in Weimar, mostly from 1708 until 1717. It was for Lent, but Leipzig would not permit extravagant cantatas during this penitential season, so Bach rewrote it for the Feast of the Reformation on October 31st, and revised it again, sometime in the late 1720s and early ’30s.

What a work this is. Many of the Bach cantatas are intimate and jewel-like, but this is a huge outpouring of jubilant praise and musical explosion. The expansive opening choral fantasia is one of the most elaborate motets ever written. This is the Bach that astounds us just he did Felix Mendelssohn, when the 20-year-old revived Bach’s St. Matthew Passion for its 100th anniversary—in 1829, the same year he began composing the Reformation Symphony.