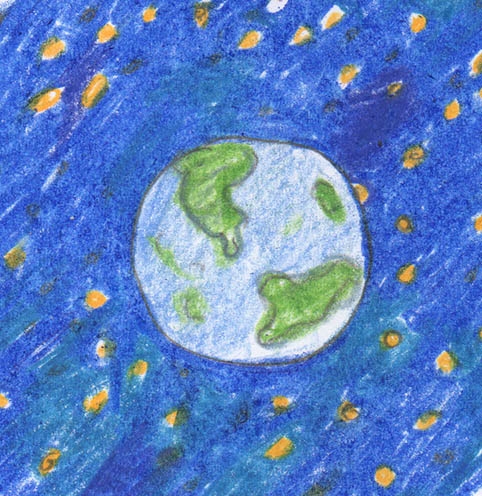 It was 2015 and I was staring up at another deadline. The art-song group Lyric Fest, with whom I was enjoying a season as their first resident composer, had asked me to write a work for a concert they were producing with the Singing City choir called “I’ll Make Me a World.” That’s a line from James Weldon Johnson’s imaginative re-working of Genesis called “The Creation.”

I had suggested setting some of Psalm 19, the great response to creation, and they liked the idea. Haydn and Beethoven had already found their way into texts based on that psalm, translated as “The heavens are telling,” their music, large and loud. That’s what I wanted: Large, loud, and, from the Renaissance I had been rediscovering for the past decade, polyphony. Independent voice against voice. That’s what I was looking for.

Then I read “The Creation”:

And God stepped out on space,
And he looked around and said:
I’m lonely—
I’ll make me a world….

That stopped me. I already knew Johnson’s hymn “Lift every voice and sing,” called the “African American National Anthem” by the NAACP (Johnson, in his multi-faceted career, had led that organization in the 1920s). Associated with the Harlem Renaissance, he led me to other writers. This, from Langston Hughes, caught my eye:

Droning a drowsy syncopated tune,
Rocking back and forth to a mellow croon,
I heard a Negro play.
Down on Lenox Avenue the other night
By the pale dull pallor of an old gas light
He did a lazy sway…
He did a lazy sway…
To the tune o’ those Weary Blues.

Something was hunting me; I couldn’t place what. The deadline was looming, I was far from Psalm 19, and composers know this desperation, when their eyes narrow as wolves’. I thought of Down from the Mountain, the documentary of the music and performers in the film O Brother, Where Art Thou? It includes a male gospel group, the Fairfield Four, singing “Po Lazarus.” While they wring out the single, leathery, winding chant, they set the time, and the time is slow.

It’s a patient time, alarmingly so, a time slogged in fields and forged in chains. It’s a time with eyes that see all the way to the horizon, and beyond. My piece, which I had not written, was becoming different, and Johnson and Hughes and the Fairfield Four were showing me how.

I asked myself if this was cultural appropriation. I thought of Brahms’s Hungarian dances, of Paul Simon’s South African and Cajun songs. If it sounds Hungarian or South African, fine; if it doesn’t—well, also fine, right? It only matters if the music’s good, I answered myself. A culture can be identified, but can it really be owned? If nobody owns it, can it be stolen?

Black and white Americans were collecting African American folk music even before Vaughan Williams and Bartók collected theirs. Among others, the African American composers William Dawson, Hall Johnson, Jester Hairston, and the great singer Harry T. Burleigh began to arrange and sing them.

Choirs of all races performed them, complete with Southern patois. Jester Hairston couldn’t sing in Hall Johnson’s choir until he shed his Boston accent. Johnson told him, “We’re singing ain’t and cain’t and you’re singing shahn’t and cahn’t and they don’t mix in a spiritual.”

Culture is never monolithic. Most Germans wouldn’t be caught dead in Lederhosen. A black singer friend of ours left her mostly black church because the spirituals she wanted to sing, she was told, were “slave songs,” and they didn’t want to be defined by slavery. They wanted gospel instead.

This argument—folk music vs. oppression’s legacy—goes back to the Civil War. Later, the Harlem Renaissance urged a return to primitivism, away from European-sounding music. Other African Americans, though, wanted to show, and did show, that they could compose “Western” classical music just like anyone else.

These are arguments I have no part in. I cannot know what it’s like to be black, let alone a slave or a descendant of slaves, but I can respect, and I can take my time. Art takes time, just like good manners. Invited to dinner, I don’t push past the host to the table. We enjoy each others’ company and, you know what, dinner’s included.

So the guest should be understanding, but so should the host. Cultures host. Everybody’s Irish on St. Patrick’s Day, we joke, and there’s something to learn, even from a saint’s day stretched beyond recognition. A culture lives through its people, but people don’t live through their culture. People live through other people.

James Weldon Johnson and Langston Hughes and the Fairfield Four had found me and were inviting me in. What was I to make of this world?

The heavens declare the glory of God, the skies announce the work of his hands.
Day after day they pour out their speech, night after night they tell what they know.

I stomped, and I waited. Then into me the music perceptibly swayed. Down from the large and loud mountain of Haydn and heavens it now found me, and now slowed me down, down to a mellow croon. From voice against voice, I now heard one voice. From my Renaissance polyphony I now saw all the way to the Harlem Renaissance, and past, to a spiritual, to a single chant. (See a video of the Lyric Fest/Singing City performance here.)