I know a German who does not drink beer. I have heard there are others, but he is the only one I know. I have never heard, however, of Germans who do not sing toasts. Even the German I know who does not drink beer, sings toasts, when others are drinking beer. It’s what you do. It is liberality itself; it may be, in fact, the essence of civilization. That non-beer-drinking German may be the most civilized person in the world.

Well, he does drink Schnapps.

Gemütlichkeit is the feeling of home, or, better yet, the feeling of home in someone else’s home. It is a universal feeling, but is expressed differently in every country—it is Mi casa, su casa, for instance, but with more meat, a fireplace, and Bier or Schnapps instead of red wine (well, Germans love singing to Wein, too). It is when you are seated at a long table in a hall, or at a table at a wedding reception, or at a crab-and-corn-on-the-cob festival, a table where nobody knows anybody else, and yet after three minutes you are all laughing. That’s a gemütlich table. It is laughter and warmth and acceptance and hugs—I’m kidding about the hugs; these are Germans, after all. Americans hug, Germans do not. Germans shake hands, and they mean it. There is much shaking of hands and looking in the eyes with Germans. With them, it feels like a hug. It feels like Gemütlichkeit.

So I thought I’d arrange Ein Prosit der Gemütlichkeit for the guys, gussie it up a bit. I gussied it a little too much, actually, on the first try, so I ungussied it some, then thought (only then I thought) about how it might be used in a concert, so I re-gussied it—with piano, with audience, and with the added “Eins, zwei, drei, g’suffa”—into this version. I’ve also made an SSAA version.

After premiering this at the United Singers of Philadelphia annual Evening of Song, 4 Mar 2018 at the Canstatter Volksfest-Verein in Northeast Philadelphia (an un-programmed surprise we slipped in), the Franklinville-Schwarzwald Männerchor gave it a go at its own spring concert, April 29th: 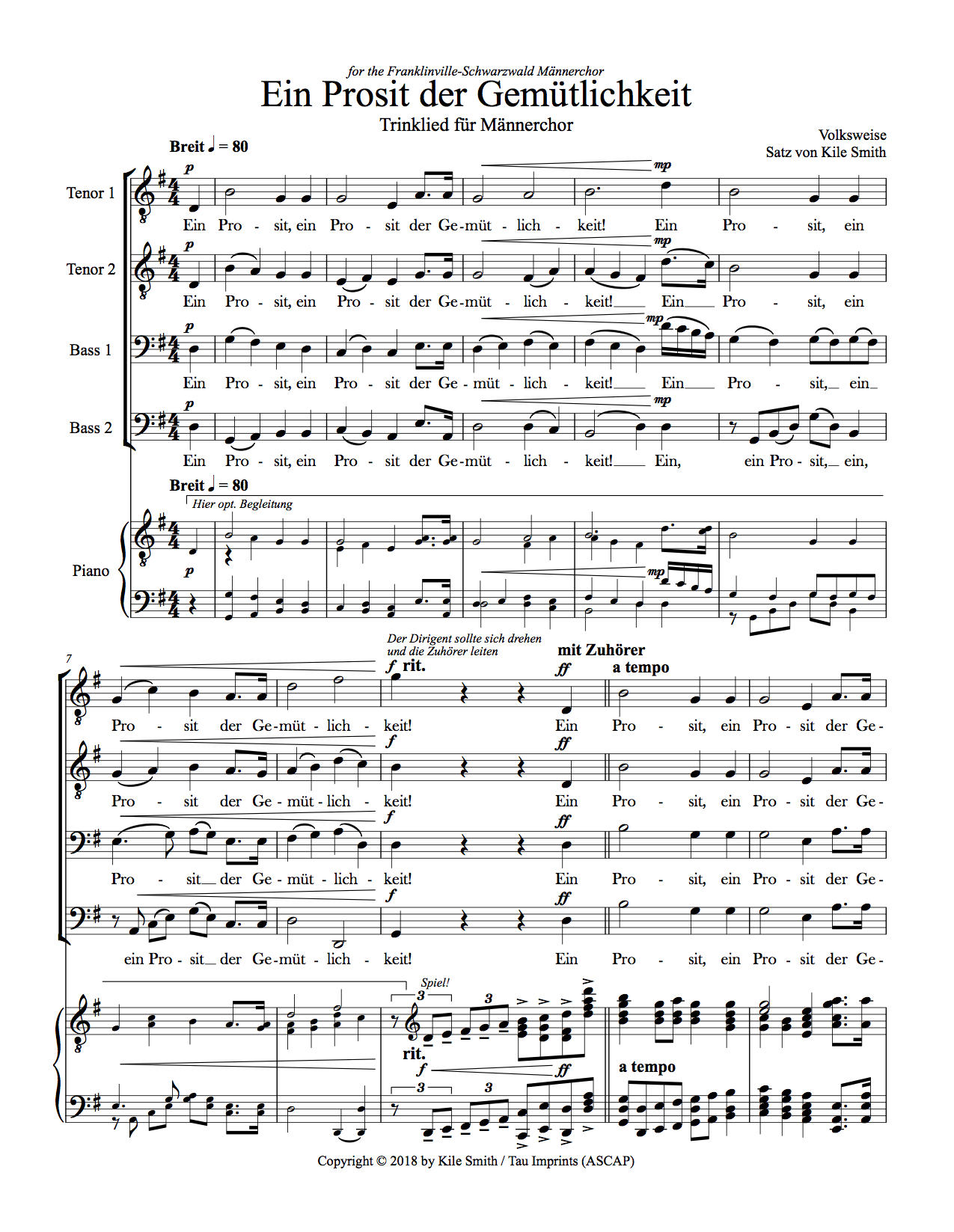 I was inspired by a moment at Brauhaus Schmitz on South Street, where we had been invited to sing German Christmas songs, for this next one. After a set, we sang the traditional Ein Prosit of course, and then one of the boys (it was Fred) started the spirited Prost, Prost, Kamerad. We joined in, but when I looked it up later I discovered I wasn’t it singing it correctly. So I arranged Prost, Prost, Kamerad, including a surprise ending I’ve learned is often appended, no matter what Prost is being sung. Here’s the MIDI, and some of the score: 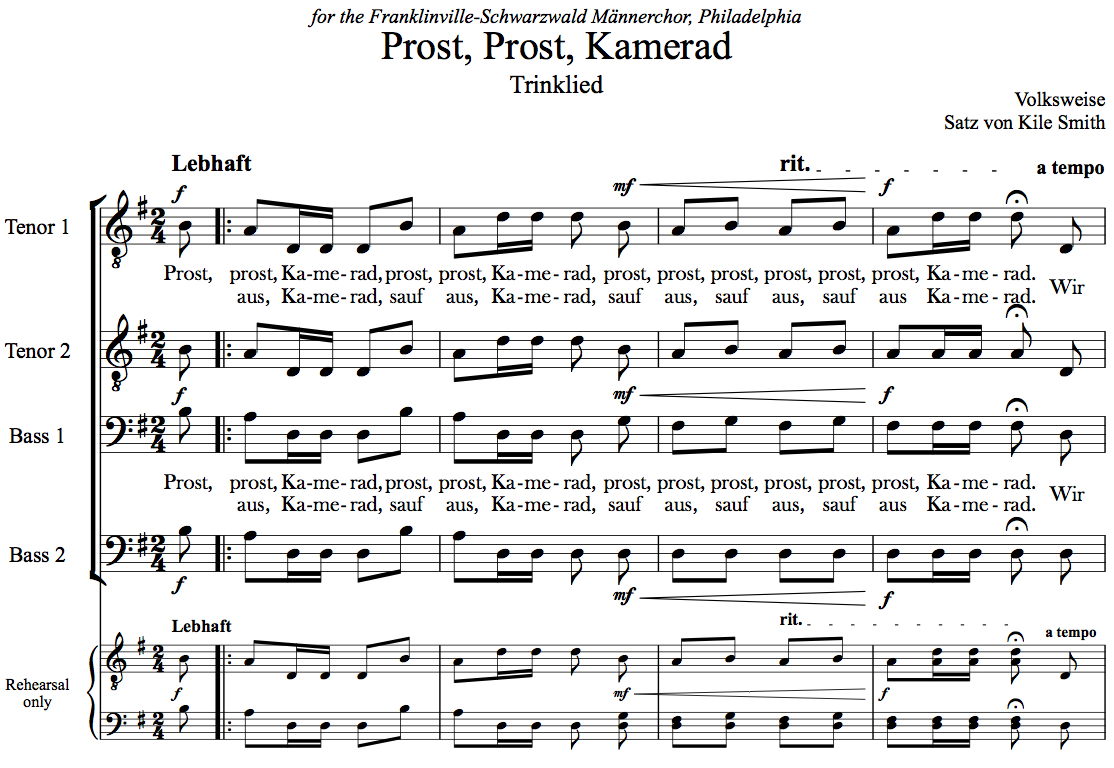 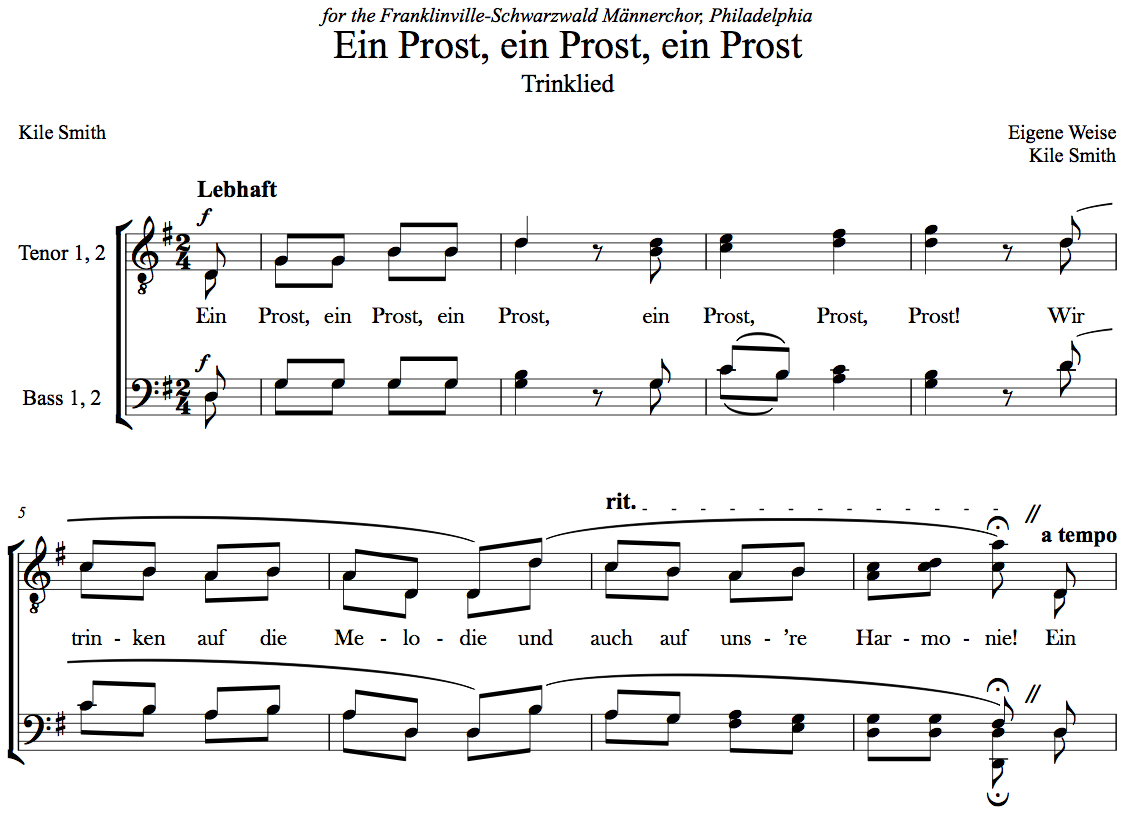 These last two are only one page long. Most of each song is here, but if you’d like to see an entire score, or all of them, or the SSAA one, don’t hesitate to ask.