A Christmas Tree on Broad Street 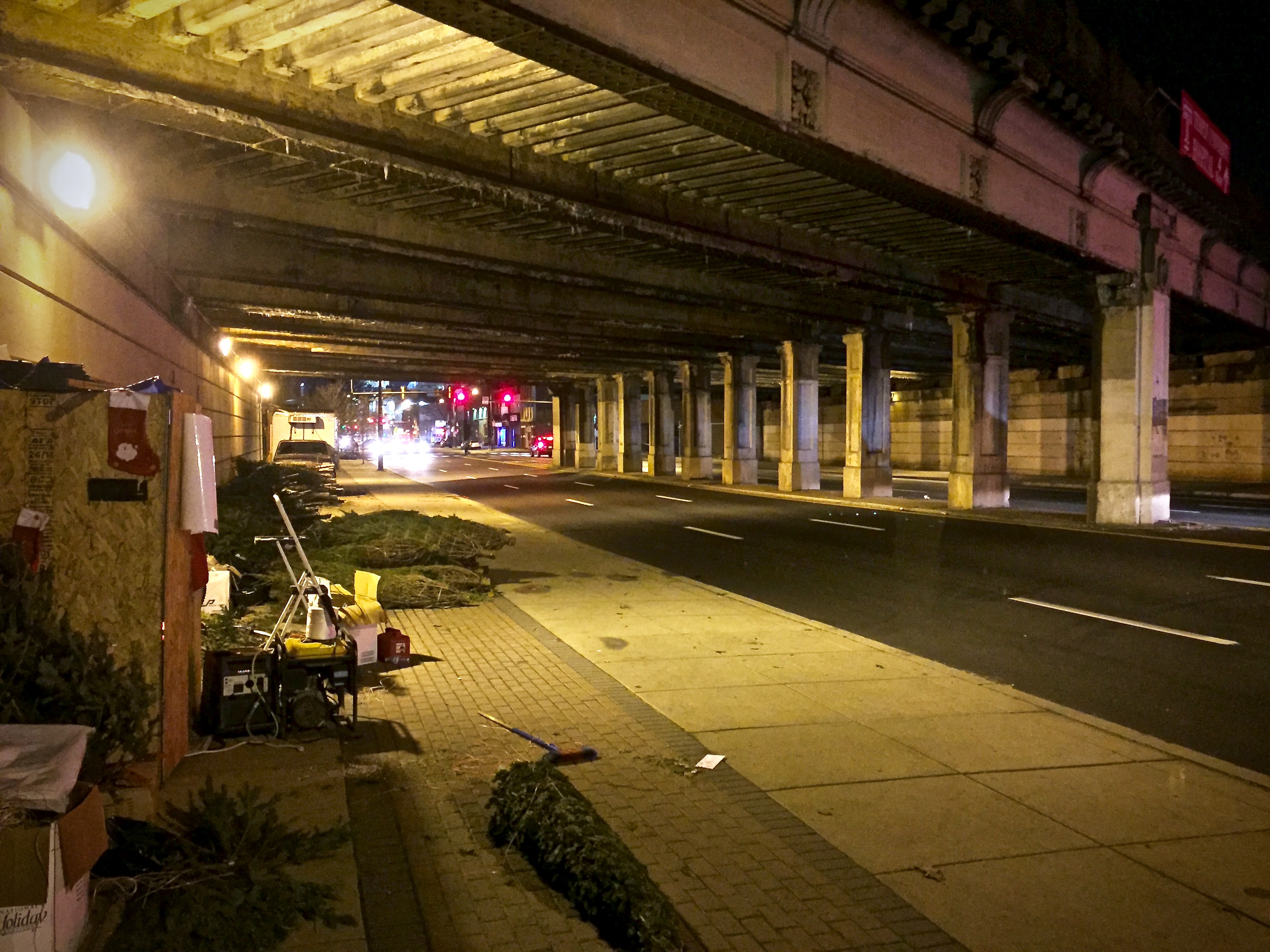 Broad Street above Glenwood, looking north (photo by the author).

December is not a good time to get ready for Christmas, not for musicians. In our house—Current Population: Three—we’re holding at five choirs and eight instrumental ensembles, with, in December, their performances, rehearsals, holiday parties, sudden Christmas gigs, their rehearsals, driving, last-minute arranging, composing, part copying, extra church music, and directing, all crescendoing to Christmas Eve. On top of work. The question, “Are you ready for Christmas?” is likely to be met with a stare.

No, I am not ready. I am not ever ready for Christmas. The lights—and not too many of those—are put up way after the neighbors’. The gifts are bought in the nick of time. It usually isn’t until the Third Sunday of Advent that I get the tree. Last year we were sliding into Week 4 when, on the way home from one event or other, and with an hour free, I saw my chance. I stopped at the horse pasture not far from us, which every December transforms into a tree lot.

The pasture was bare. I stared blankly. I drove a mile to Young’s Market. They had trees a few days before, but as I drove up, I said, “No, no, no,” to the now treeless parking lot.

Even Whole Foods had tidied up the grounds devoted to spruces and firs, and had moved on. Plastic-wrapped bundles of premium firewood (“Lights Fast & Easy”) squatted there, mocking my tardiness.

I was not joyful. But driving into town the next day on Broad, I noticed what I had long been seeing but ignoring. I noticed Christmas trees for sale at the train bridge over Broad at Lindley. I was up on it before I could pull over, but that reminded me of the similar one at Glenwood. When I arrived, I pulled into the right-hand turn lane and put on the flashers.

There were trees, dozens of them, stacked on the sidewalk, leaning against the retaining wall. A shack made of crazy-quilt plywood nestled under the bridge, just like at Lindley.

“How late are you open tonight?” I said to the man, fairly young, who emerged from the shack into the morning cold. “I’m here all night,” he said. Then he stopped to think of something. “Don’t you worry,” he said. “We’re here 24 hours, right through Christmas morning.” He didn’t say “24/7,” he said “24 hours.” For some reason that gladdened me.

I told him I was happy to see him open, and the one further up north Broad. “My uncle runs both of these.” “At Lindley, at the other bridge?” “Yeah, me or somebody, we’re always here.”

I returned from downtown at about 8:30 that night, U-turning into a spot behind a minivan. The young man was there, helping a lady.

Walking to the trees, I could see no prices. I reached into the first one I came to, lifted it four feet away from the others, spun it once, and leaned it back. It was fine. I always buy the first or second one I touch, always. I have never seen a bad one. The man was taking a tree to the lady’s car. He said to me, “Find one?”

I nodded and waited.

Someone jogged across Broad toward us, ahead of a green-light-released wave of traffic. “Where you been?” said the young man.

“Over there,” said the second, an older man, small and hard, hooking a thumb back across Broad. “I was over there.” Over there is a Speedway gas and Home Gallery Furniture & Bedding. On the furniture building are the letters: “Joe Frazier’s Gym.”

“Sweep up some,” the young man said. He was curt but not unkind.

The older man asked me, “You being helped?”

He seemed to forget about sweeping. We looked across Broad Street.

“I knew Joe. Knew everybody there.”

“I fought some. I was pretty good, too, but I gave it up. I didn’t like gettin’ hit. My son, he’s really good, better than me.”

“Your son trained there?”

It was hard to tell with heavy coats on, but I said, “You look like you got some reach, too.”

“I’m six foot.” I’m a half-inch over that, but with his estimate so far off, it seemed aggrandizing to mention it.

“Six foot?” His voice raised, his eyebrows lifted, the corners of his mouth dropped. He looked me over. If he was expecting me to say something else, I didn’t.

“Must be the shoes,” he shrugged. I laughed at the incomprehensible joke.

In five minutes my tree was tied to the roof rack, bottom branches lopped, a slice cut from the trunk to open up fresh wood. The young man did it all; the helper hovered. With his gloved hand he wiped off the already clean back window of the car. I handed him a couple bucks and wished him a Merry Christmas, extending my hand. I wasn’t wearing gloves. He removed his glove and we shook. “Merry Christmas, now,” he said.

I paid the young man. He went for the broom, and I asked, “So when are you ready for Christmas?”

“Me?” He stopped, and he thought, and he smiled. “I’m always ready for Christmas.”

I waved and walked to the car. He started sweeping. As I turned the key, the helper was looking across the street at the furniture store. I waited for the traffic to clear, and then I was ready.

I made a U-turn and drove up Broad with my Christmas tree.