Driving off a Bridge 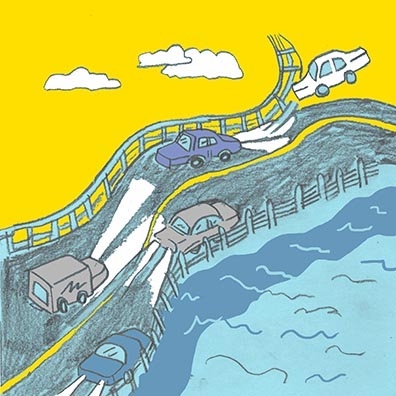 [First published 23 Jan 2018 as “Life is a dream” by the Broad Street Review and reprinted by permission.]

The two lanes merged as I slipped past the slower car to my right. Two other cars ducked in behind me. We were approaching a one-lane bridge, thin and high. The roadbed was bright white, clean and new but almost too bright, like the Girard Point Bridge, south on 95 toward the airport. That bridge curves to the right while you’re still high up, over a no-man’s land after crossing the Schuylkill at the Delaware. It curves to avoid running into the airport, but in the left lane, high up, curving to the right, you feel, uneasily, that you could fly out onto the runway.

On this one-lane bridge, though, the roadway soon turned into a steel grid, slippery under the tires. I was sliding to the left. The cars were closing behind me but I tapped the brakes because of the sliding. Nothing happened. The left guardrail disappeared. The edge of the road curled up into a chute. My left tires started to ride up it. I stepped on the brake pedal harder. My calf and thigh tightened; the tires felt like they were ball bearings. The top of the narrow bridge rose up and up and all I saw was sky.

It was that dream again. I opened my eyes, levered myself up on an elbow, and made a wry face in the dark. That Burlington-Bristol dream again. It is not a nightmare anymore, not really, as it was when I was a child, but a dream about the Burlington-Bristol Bridge has come to me, in one form or another, all my life. It will be months or years between visitations of reckless runs over the bridge, this particular bridge, but they always return. It will begin or end with that bridge, it will mix with other roads or other bridges or other water, but it is my lifelong companion.

I was driven over the Burlington-Bristol only once as a child, as far as I remember. Why we took that bridge, from Pennsauken, I don’t know. Where were we going? Was the Tacony up? But vividly I remember it being very high, and very narrow. I remember being very close to its edge, and seeing the water way down. The possibility of falling off the bridge scared me enough, but being in a car in water frightened me even more. I sat very still. I did not want my little sister to know I was scared.

I had been over the Tacony-Palmyra a few times. The steel grid roadbed in the middle always made the tires shift as they sang. But the Burlington-Bristol, that was precarious. It looked like a strong wind could push it over.

The bridges, it turns out, are exactly the same height: 61 feet above the Delaware. The Tacony, though, is almost twice as wide, 38 feet to Burlington’s 20. That’s the difference, the thinness as you hurtle through the air. There is no margin, there is nothing to hold onto.

While driving, while crossing a river, while going from one state to another, while creating music or creating a life, I want to hold onto something. Just to make sure. There is so much to control, there is so much out of control.

That dream belies my love for driving, driving long distances, through and around cities, over turnpikes and mountains. I don’t mind trucks, tunnels, entrance ramps, or bridges. Cars in the left lane are a persistent odium, but pretty much, nothing else bothers me.

A few years ago I drove over the Burlington-Bristol just to do it. Perhaps I supposed the trip would exorcise my dreams. There was no reason to go from PA 413 to NJ 413. I drove my family across it, then we worked back to the Delaware, parked, and walked along the bank. The bridge is handsome. Under the New Jersey approach, you see its roller-coaster over-built ruggedness, warm and proud.

The white roadbed was glowing now. The sky had been overcast for some time, but it was a thin and shifting overcast, with light filtering down. The sun was covered but visible; it looked like the moon, like a yellow moon; you could look right at it through the white and the blue-gray.

There was little traffic on the three wide lanes, just a few cars ahead. No one was behind me. The light from the sun drifted down not as rays, but as a translucence. Off both sides of the highway, farms rested under a blanket of an old snowfall. It had melted and refrozen into the shine of textured ceramic tile.

This was not a dream. I had been driving all day, from Philadelphia to Cincinnati, to a week of concert rehearsals and recording sessions for Canticle and Alleluia. I was on the last leg, hadn’t stopped since well inside Pennsylvania four hours ago. I pushed the last 90 miles. I remember a sign for Xenia.

How did this happen, I wondered, that I was driving to hear my music? I never could have made this happen. Why did a person I hadn’t met ask for this? Why did people tell him about me? How did I know those people? How did the piece for them happen? How, every other piece? I went down the list. Why did music come this way, without my control? When I try to make it happen, it doesn’t. When I don’t, it comes.

The white cream farms rolled off both sides of the highway and behind. The light from the moon-like sun fell not on me but onto the few cars in front of me, bathing them. I followed them in the glow, smiling. I cannot describe what this light was like. It was light through a scrim, a canopy, a light that was bright and soft, broad and white, gentle, still, and warm through mist and over snow, a gift descending, flowing like water, and it was like I was swimming in grace, like I was driving in water.