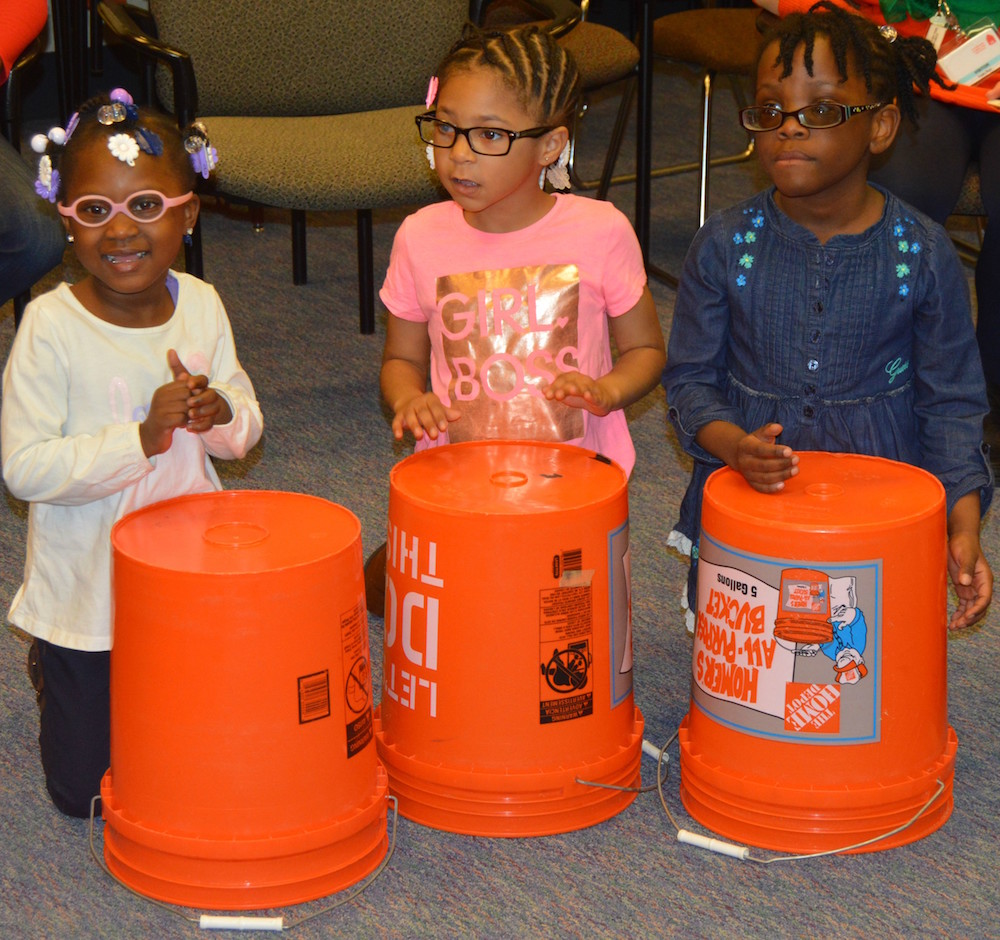 Happy members of the bucket-drumming brigade. (Photo courtesy of Musicopia.)

[First published in Broad Street Review 7 May 2018, and reprinted here with permission.]

Movement titles “I Got the Musicopia Blues” and “Sneaking Past Your Parents’ Bedroom at 3 AM” give a taste of the humorous, accessible slant of Mark Laycock’s “Musicopia” Suite for String Orchestra, premiering Saturday, May 12, at 5 pm at the Church of the Holy Trinity on Rittenhouse Square. Musicopia String Orchestra artistic director Daniela Pierson conducts, and storyteller Charlotte Blake Alston narrates the 12-movement, almost 30-minute work.

The piece should “be fun for all,” writes Laycock from Germany (where he currently lives), but he also included techniques such as harmonics and pitch-bending to challenge string players in the middle- to high-school range. Musicopia works with students these ages and younger in 60 public, parochial, charter, and private schools in Passyunk Square, Kensington, North Central, Strawberry Mansion, Olney, Elmwood, and other neighborhoods throughout Philadelphia.

“Musicopia is passionate about giving children from underserved Philadelphia neighborhoods access to music and the opportunity to learn to play an instrument,” says Musicopia executive director Denise Kinney. “It was founded in 1974 when schools first began cutting music programs. Today, it serves the same missions. This year, Musicopia will offer more than 2,000 programs to more than 15,000 students.”

It does this through lessons; ensembles, such as the string orchestra; and its Gift of Music instrument-donation program. However, orchestral instruments aren’t the only way to get music into the hands (and ears) of students. Extensive percussion activities involve rigorous drumline percussion and the increasingly popular bucket drumming.

Reports for years suggest that young people involved in music will become better all-around students. Musicopia staff aren’t the only ones emphasizing the nonmusical benefits of involvement in music. “Drumline has helped me to be less nervous performing and to be more social at school,” says an eighth-grader from Hill-Freedman World Academy on East Mount Pleasant Ave.

Studying viola as a 17-year-old with the Curtis String Quartet was conductor/composer Mark Laycock’s introduction to Philadelphia. He lives in Berlin now, but his many Philly-area ties go back through guest-conducting engagements with the Philadelphia Orchestra to  more than 20 years as music director of the Princeton Symphony Orchestra. Returning to Philadelphia this week, he’ll work with students in rehearsals leading up to Saturday’s concert.

Along with the learning and fun Laycock incorporates into the Suite are salutes to friends Philip Kates, violinist in the Philadelphia Orchestra, and conductor Daniela Pierson (using the pitches D, A, and E from her name). Movement 7 may be the most telling tribute, however, in a piece celebrating the work Musicopia does. The title is “Dan Holt: DH” (also using musical notes from the name) — Daniel Holt was Mark Laycock’s childhood orchestra director.