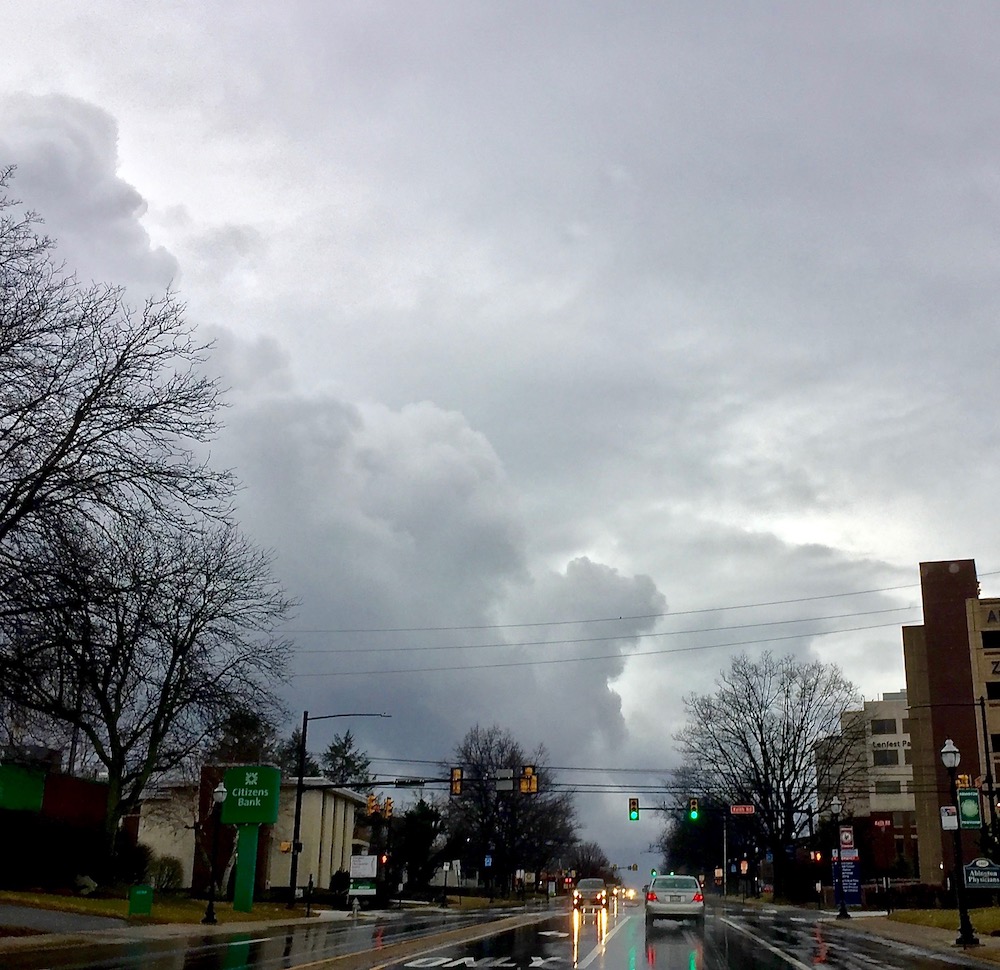 [Published 10 July 2018 in the Broad Street Review and reprinted here with permission.]

Abington Hospital’s emergency entrance is across Old York Road from Señor Salsa, which is not a crack at Señor Salsa. I note it only because this is the first time I’ve looked squarely at the restaurant. I’ve driven past it (and its earlier incarnation, Inn Flight) at least four times a week the last 20 years, but today I’m looking right at it, past my feet and through the back window of an ambulance. The world looks different through the back window of an ambulance.

Eight electrodes stuck to me are wired into machines. “We did an 8-lead,” Steve, one of the EMTs, will say to the mm-hm’ing triage nurse. “Lead” is pronounced as something that leads to something else. In the hospital I’ll be promoted to 12-lead.

As we wind around the driveway I ask the EMTs if they’ve ever gone to Señor Salsa. It’s a place you’d hang, I’d think, if you frequented the hospital. No, Steve hasn’t. Mike, studying a slip of paper tongued out at him from a machine, like a receipt from a gas pump, shakes his head and says, “Naw.”

They take their time with me: 10 minutes and no siren for the three-minute drive from church, where they picked me up. It’s Palm Sunday. Three of us chanted the Passion story. In a liturgical church such as ours, three singers—low, medium, high—sing Christ, the Narrator, and Everybody Else. I’m the low voice, so I sing Christ’s words, been singing Christ for years. We chanted and returned to the choir loft, and that’s where I fainted. Yes, I sang Jesus and fainted.

Steve and Mike tell me they get church calls. Concerts and churches. Two venues I frequent.

It happened to me once before. I was at a concert in a church, talk about living dangerously. It was 35 years ago. Jackie was singing in the old Pennsylvania Pro Musica, at Christ Church in Old City. I was fighting something and during the concert I started feeling sick to my stomach. Something I ate? I’d better leave—no, don’t walk out in the middle of the concert. Well, you’d better. No, maybe it’ll pass. It isn’t passing. Leave. Leave Right Now. I got up and walked to the back. An usher opened the door for me. I tilted. Everything went black.

I woke up on a bench outside, surrounded by people asking if I was OK. I remember leaning, I said…He caught you, someone pointed. The second usher; I hadn’t seen him. He smiled a flat, shucks smile at me and nodded.

From the choir risers Jackie had noticed commotion in the back of the church but learned only later that I was the commotion.

What had happened then, and now, was vasovagal syncope. “He’s a vaso,” I heard Steve say, vaso pronounced vay-zo. Vaso is blood, vagal is nerve, and syncope, like syncopation, goes against the beat. The brain detects a loss in blood pressure, and shuts you down before anything bad, like dying, can happen. The brain needs blood, and the quickest way to accomplish that is to make you horizontal, is how I figure it. Sure, you could hit your head on the way down, and if you’re alone you could bleed out and die, but that’s a chance the brain’s willing to take. If you don’t bleed to death, though, the brain gets its blood, pressure regulates, and you come back.

The triage nurse (“You’re lucky, you’ve got the best one,” Steve whispers as I’m wheeled in) is one of many who will question me. “Do you take drugs?” “Are you on any medication?” “Did you eat breakfast?” “Are you depressed?” “Have you—these days, I have to ask—have you ever dreamed of killing yourself?” I don’t ask her why “these days,” because I don’t want her to view any question from me as weaseling. No, no, yes, no, and no.

Narrator, who is my good friend, was under the weather, and just made it, singing his part, touch-and-go near the end, actually. Afterward, in the loft, he started tilting, and that’s when my vaso started rope-a-doping my vagal. Not the sight of blood, not locking my knees, but seeing my friend buckle: that did it. He sat down and I reeled.

When I came back, I was looking at the sanctuary ceiling from the choir pew, laid out, covered in sweat. Church was silent. My Palm Sunday palm bowed near my head from the hymnal rack. Faces peered down at me: my choir friends; a doctor and a nurse from the congregation; Jackie, who should be sitting at the organ; our youngest daughter, with tears in her eyes, what could she be thinking. I tried to smile at her, but I don’t know if it took.

Two hours of tests later, the hospital concludes that my heart’s good, my ranges to two decimal places are good, everything’s good. I fainted, it happens. My friend never passed out. Because men joke, we will, through our connected mortality, joke about this. Driving home, looking ahead on Old York Road again, I think to him; to my friends peering down with love through fear; to Jackie, holding my hand tightly; to the bright and shining eyes of our youngest daughter, who is no longer a child.