All the Elk in Benezette 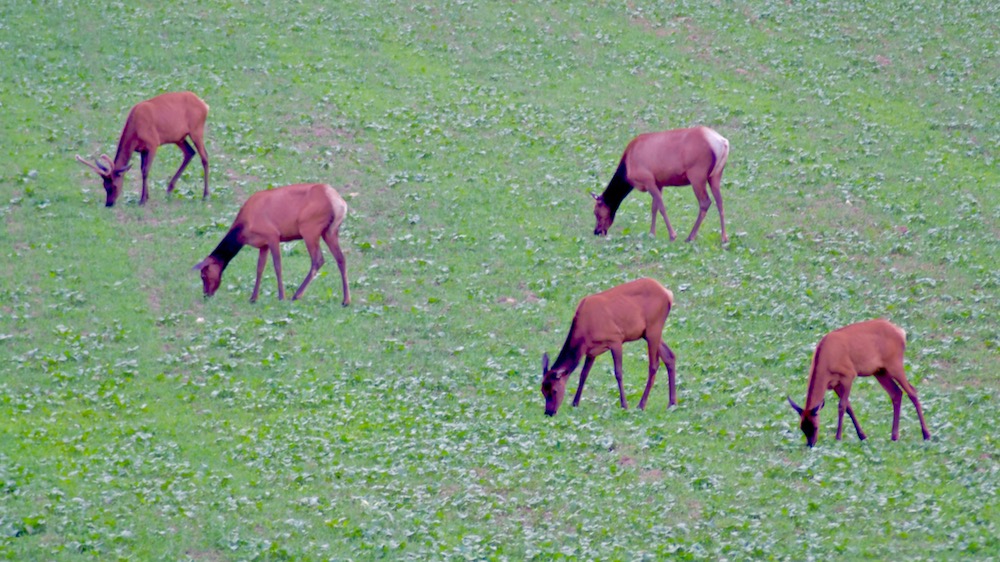 To say the elk doesn’t care would be a disservice to the animal, but I don’t know what else to call it. The person who leaves the car at a busy gas station’s pump to buy chips in the store doesn’t care; the elk isn’t like that.

This was the first time I’d seen an elk, and being in its vicinity, I expected to have some effect on it. I realize this is self-absorption, but I was puzzled. I noted its attitude but couldn’t define it.

We were driving our middle daughter to western New York, where she would teach at a music camp. I’d just had a big piece, The Arc in the Sky, premiered and recorded by The Crossing three days earlier. I tried new things in it, new for me, anyway: swirling jazz harmonies and tectonic, slow, meditative writing.

I worried about how it would be weighed in the balances people bring to premieres, but the reception was grand and effusive. Positive reviews appeared. Still, I worried.

We made a vacation of the trip, staying in north-central Pennsylvania, St. Mary’s, on the way back. Jackie has family in central New York, so over the years, we’ve traveled just about every road you can find between there and Philadelphia. Like settlers, we’ve gradually expanded westward — although, unlike settlers, we keep coming back.

Jackie plans, and I drive. I’d do the 12-hour round-trip in one day if it were up to me since, being a composer, I’m used to plunking down in a seat and not moving. My wife and other normal people, however, prefer enjoying their trips, so we took two days. Jackie researched to find what there was to find up there.

What she found were elk. There’s a herd of elk in Pennsylvania. I didn’t know this. Where they came from, I don’t know. Maybe they went west with all the other elk but came back. Maybe they saw that the area was named Elk County and it seemed providential.

The websites say that Benezette is the best place to see elk. Leaving St. Mary’s, driving down the mountain you must drive down to get to Benezette, we saw an elk sign on the road: a diamond-shaped, bright yellow, black silhouette caution. First time I’d seen that, too.

A deer on a deer sign leaps to stage right, dexter if you’re up on your heraldry. The elk, on its sign, keeps to all fours (passant) and looks stage left (sinister). Already, attitude.

There was a bear sign, too. One. If they thought one is all you needed, they were right. All I could imagine were bears darting out from behind every tree. There are a lot of trees.

I ignored Jackie describing the mountain road’s breathtaking scenery beyond the drop-off because my eyes were fixed on the narrower-than-necessary blacktop. Also, I was on bear alert. We finally descended to Route 555 and glided into Benezette.

The websites say that when you get to Benezette, stay a football field away from the elk because they’re wild animals and, well, you never know. We scooched up another road to the Elk Viewing Area. I was dubious that elk would be there just because it was called an Elk Viewing Area.

We pulled into the parking lot. Beyond the far end, people clumped atop a bluff. They had binoculars, cameras, children. We walked over and sure enough, past the edge of the bluff, there stood, a football field away, a herd of elk.

When I saw the elk, it got real quiet inside my head. The cautions, the mountains, and the narrow roads had made my brain noisy. It was like leaving a busy restaurant at night, walking into the parking lot, and looking up to see the moon, but it’s one of the moons they have a name for — Harvest or Hunter’s or something — larger or brighter or redder than the moon you’re used to, and you stop, car keys in hand, looking at it with your mouth open, like you’ve never seen a moon before.

That’s what this was like. Elk are bigger than deer; they’re like Harvest Deer, fuller, darker, redder, wilder. I was okay with the 100 yards.

It was getting to dusk, so we left to get back over the mountain before the bears gathered behind trees in the dark to wait for us. Leaving the parking lot, I pulled up behind a motorcyclist. He didn’t move. Just before impatience kicked in, I saw why he wasn’t moving: an elk, across the street.

It didn’t care we were that close. No, it had no care. Without care — that’s it. That’s the elk, without care.

After a minute, the motorcycle slowly left. We started down the road. Then, up ahead in a front yard stood another elk, then another yard, and another elk. Then more. There were elk everywhere, elk all around, no football fields, just us and elk abounding, elk passant, sinister, dexter, looking-at-us, not-looking-at-us elk. And each elk, without care.

To St. Mary’s and all the while thinking of the elk’s attitude, of how one gets to be like that, without care. I thought of ancient people revering animals, of obtaining the spirit of the animal. Is this that? Is seeing the animal and seeing the attitude and remembering, is that getting its spirit? Is that being without care?

I don’t know, but coming out of a little St. Mary’s restaurant, still worrying mid-vacation over what people thought about my piece, I remembered the elk, all the elk in Benezette. Then, car keys dangling from my hand, I looked up into the dark, black, soft, warm, alive north-central Pennsylvania sky, and the sky felt like an arc over me.