Let me entertain you 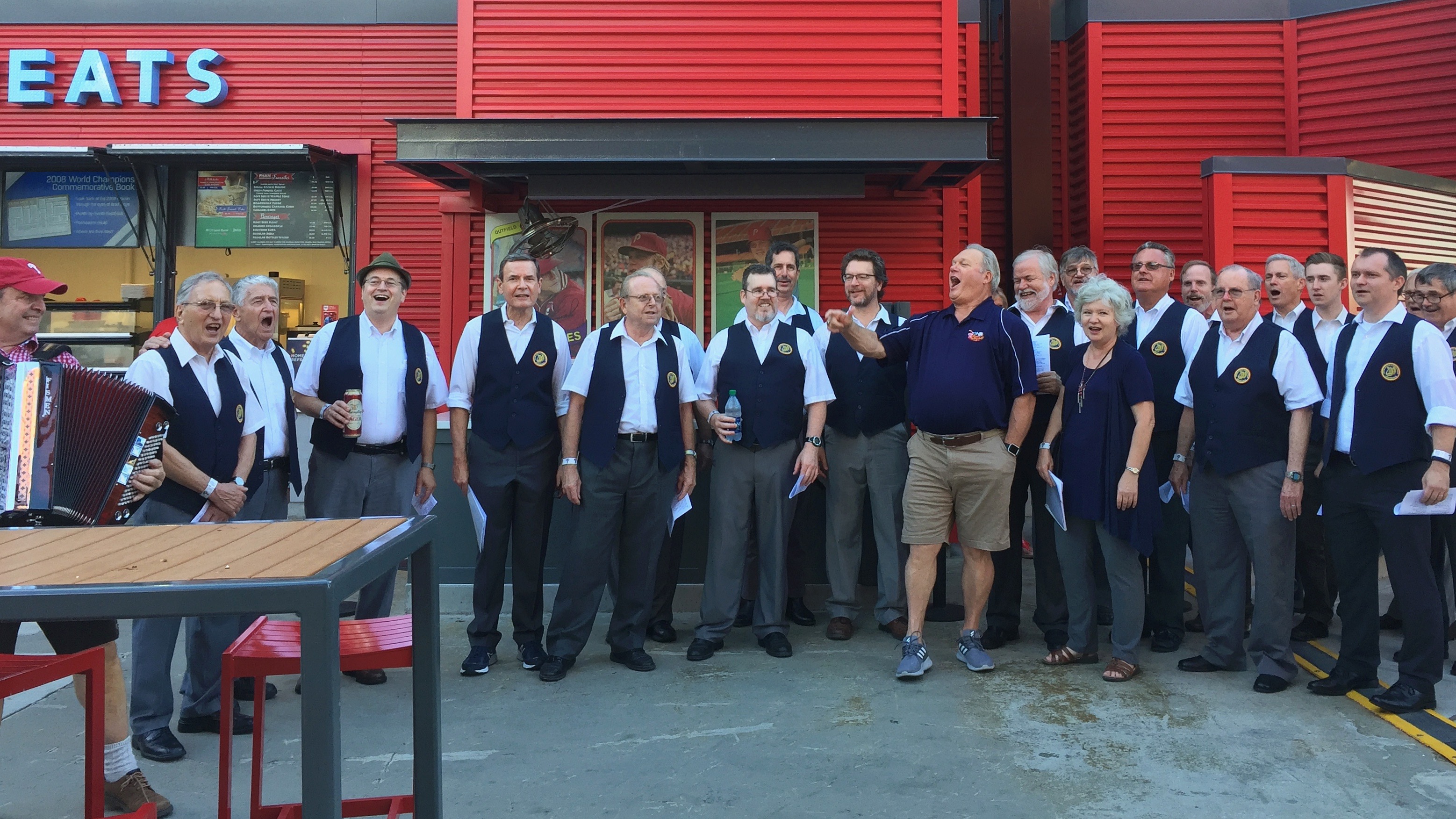 I wasn’t prepared for the reaction—my reaction, that is. This was the second time our German men’s choir would sing the national anthem at the Phillies. I wrote about it two years ago here in BSR. This year, in addition to the anthem, we sang folksongs and other music in the stadium concourse with accordionist Don Bitterlich.

Among the special events the Phillies run are ethnic ones: Italian, African American, Jewish, Irish, Latino, Asian Pacific, Dominican, Greek, and a “German Heritage Celebration” that marches in near the end of the season, around Oktoberfest time. I’m a Smith, but a three-quarters German Smith. Other than taking German for three years way back when, I wasn’t exposed to much of my ancestry, so it’s been a field of study for me.

Turns out one part of my family comes from a Rhineland town next-door to the family of a guy I know. His people came over last century, mine came over to Berks County in the 1730s, but there’s an electric shock that runs through you when you discover a Landsmann (German for paisano).

Bitterlich plays hundreds of songs by heart. We sing a handful with him, “Muss i denn,” “O du lieber Augustin,” “Du, du liegst mir im Herzen,” bits of tunes most Americans will have heard. Some they wouldn’t know at all, though, like “Ein Heller und ein Batzen,” (“I have a penny and a dime. The penny’s for water, the dime’s for wine”), songs brimming with heidi heido heida and ha ha ha ha folderol, songs where we, like German Cab Calloways, throw ho di ho’s back and forth to each other.

To sing them is to enjoy them. We loosen up the longer we sing, and even get to cracking each other up. People don’t know the words but can’t help smiling and laughing along. Don jump-starts one song after another as we gather near a Hatfield Grill or a Brewerytown stand. We sing a quick set, move to another spot, and do it again. In an hour we’ve circumnavigated the 100 level.

The Bull himself, Greg Luzinski, came out from Bull’s BBQ and shook our hands as we approached. We sang him a toast—”Ein Prosit”—and he surprised us by joining in.

Walking past Harry the K’s we sing the chorus from “Der Fliegermarsch.” Many of us have memorized this “Aviators’ March,” unknown in the United States. It’s a crackerjack tune that sounds like a college-football fight song but is, in fact, the hit song from a 1912 operetta by the Austrian Hermann Dostal. He created, with Franz Lehár, Oscar Straus, Emmerich Kálmán, Rudolf Friml and others, the music that became—by way of Victor Herbert, Sigmund Romberg, and on through Kern, Berlin, and Rodgers—the classic sound of the 20th-century American musical.

Dostal knew what he was doing, Bitterlich knows what he’s doing, and with us looking at each other and at everyone listening in front, behind, and on walkways above us, we can do a slam-bang “Fliegermarsch.” Phones are out and up, pictures and videos are taken, and smiles, smiles are everywhere.

People wave. Someone catches your eye and during a faria, faria, faria-ho, mouths a silent “Thank you.”

That look in the eye. I didn’t expect how profoundly it would hit me, this singing of these silly folk songs. In our more formal concerts we sing them and our audiences applaud. But at the ballpark, people aren’t expecting to be an audience. They’re looking for their section number, they’re deciding over chicken fingers or Italian sausage, when guys in matching vests come up and start singing at them in a foreign language. And they look up, and they smile, because we’re entertaining them.

Entertainment is what hit me. Because I compose supposedly serious music, entertainment usually isn’t in the forefront of my thinking. Music is thought to be serious or not.

It’s an easy belief, but it isn’t accurate. To entertain is simply to hold one’s attention, after all. Once you have someone’s attention, then you can do something. But if music, even “serious” music, isn’t at least entertaining, then it seems to me it doesn’t have a chance to do anything.

We call art high-brow, low-brow, even middle-brow, but those terms miss the point. Art needs to look you in the eye. The brow’s got nothing to do with it. We look each other in the eye. And if you smile, I’ll take it.

Are folksongs great art? Some are, I think, but in many cases, and in many senses of the phrase, I suppose not. How wide a landscape of emotions they cover, how deeply they burrow into the soul, are questions worth asking. 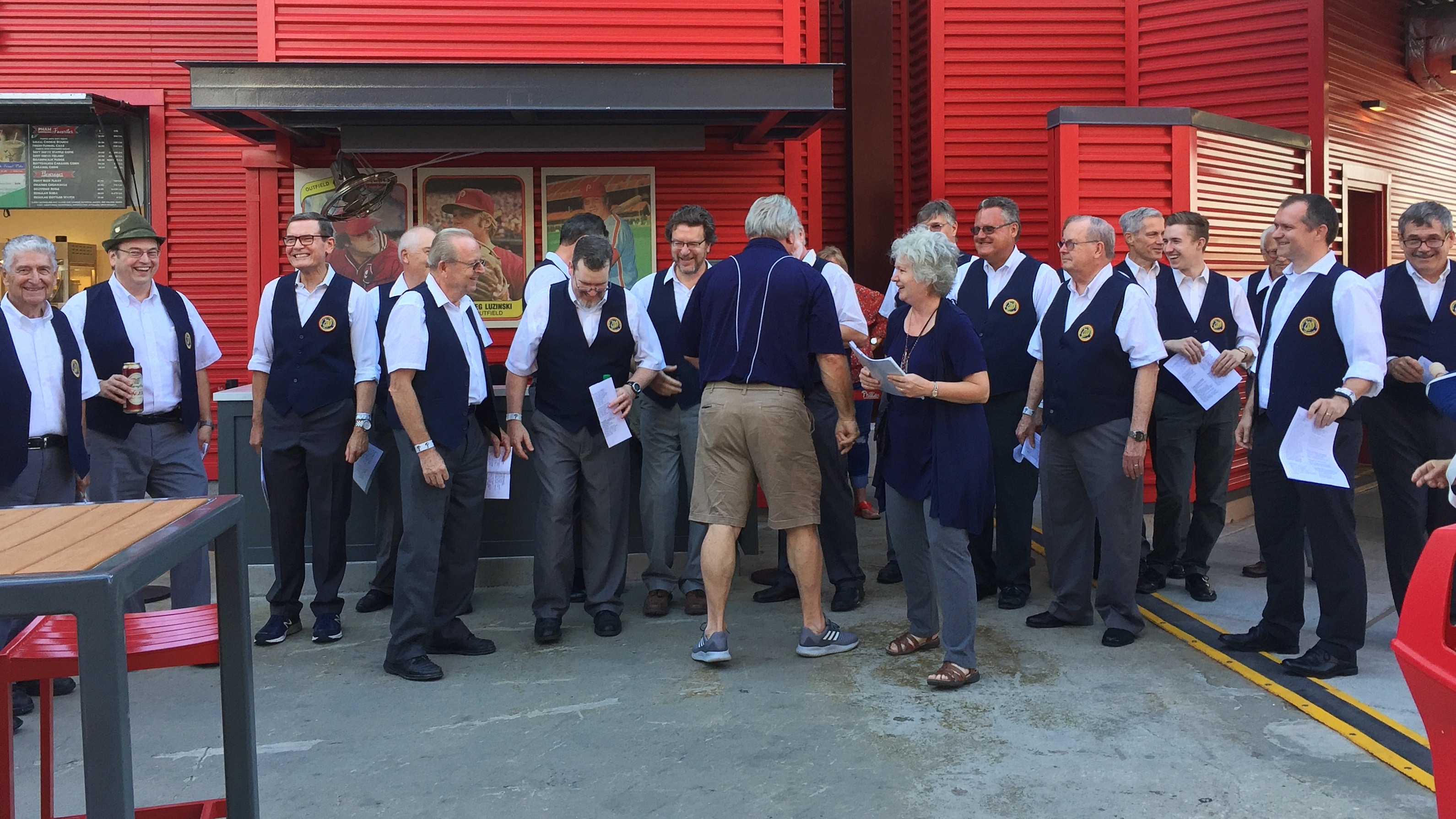