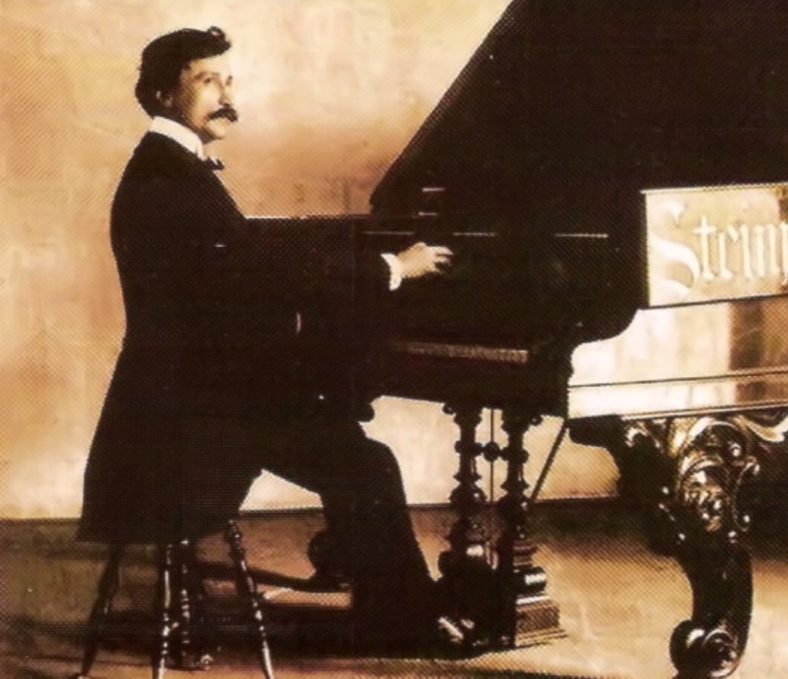 Thanks for joining me on Fleisher Discoveries, a podcast produced by the Edwin A. Fleisher Collection of Orchestral Music in the Free Library of Philadelphia. I’m Kile Smith. Today we turn to Mexico, to the Romantic composer Ricardo Castro, to the first Latin American piano concerto, and to a recording made possible only because of the Fleisher Collection.

Let us know how we’re doing on Fleisher Discoveries! Send me an email, kile@kilesmith.com. You can also check out The Edwin A. Fleisher Collection of Orchestral Music on Facebook, leave a comment there give us a Like. Jeff’s been listening for years. He lives now in Philadelphia but is from California, and wrote in to say that last month’s Elinor Remick Warren Suite, about the clouds in the California sky, was fabulous! Thanks, Jeff! Of course, all the podcasts are up on SoundCloud and you can go back to them at any time. Just hit up SoundCloud, type in Fleisher Collection, and there we are.

From early on Ricardo Castro was meant for music. He was born in northern Mexico, and his parents enrolled him in piano lessons when he was six years old. By the age of 13 they had moved to Mexico City, he entered the National Conservatory there, and completed his studies at 18. At 19 he was a touring concert pianist, and at 20 he represented Mexico at the New Orleans World’s Fair. He concertized in New York City, Philadelphia, Chicago, and Washington, D.C.

Castro’s playing career and his works for piano, including Chopin-inspired polonaises and waltzes, led to fame throughout Mexico, where he helped found music institutions and organize concert series. He gave the Mexican premieres of the Grieg Piano Concerto and the Schumann Piano Quintet.

He played 30 concerts in 17 cities in Mexico in 1902, and the next year the Mexican government supported a trip to Europe, where he studied in conservatories in Germany, Italy, France, and England. On that trip he was able to take some lessons with the world-famous Venezuelan pianist Teresa Carreño.

He was appointed director of the Mexican National Conservatory of Music on January 1st, 1907, but held the post only for a few months. He died of pneumonia that November. In his short but busy life Ricardo Castro was an important figure in the history of classical music in Mexico.

He composed his piano concerto in 1887, dedicated it to Carl Reinecke, and premiered it in Antwerp at the Belgian Royal Society Concerts. It’s brimming over with the influences of Chopin and Liszt and driving Romantic invention. There are three movements including the polonaise Finale, and you’ll hear the movements flow right into each other. I think the second movement’s Mazurka is simply gorgeous.

So on Fleisher Discoveries let’s hear the Concerto for Piano and Orchestra, the opus 22 of Mexican composer Ricardo Castro. Recorded live at the Teatro de la Paz in San Luis Potosí, Mexico in 2014, the pianist is Rodolfo Ritter, and José Miramontes Zapata conducts the San Luis Potosí Symphony Orchestra. The Piano Concerto of Ricardo Castro.

That was the Concerto for Piano and Orchestra by Ricardo Castro, recorded, as we can tell, before a live audience in 2014. José Miramontes Zapata conducted the San Luis Potosí Symphony Orchestra in their hometown Teatro de la Paz. The piano soloist was Rodolfo Ritter. The Ricardo Castro Piano Concerto on Fleisher Discoveries.

I said at the beginning of the podcast that this recording was made possible by the Fleisher Collection, and what that means is this. If you can picture all the musicians on stage, they all have music stands, and on the music stands there is music. Well, the only place in the world the orchestra could get this music, was from the Fleisher Collection. Even though it had been published, music disintegrates or is lost. But because the Fleisher Collection is an archives as well as a lending library, everything is preserved, and so we’re called on to supply materials that were once available but no longer are. So, for this Sterling Records CD, the Fleisher Collection at the Free Library of Philadelphia provided the performance materials for Castro’s piano concerto, as well as his cello concerto and the symphonic poem Oithona, pieces we’ll be able to get to on future podcasts.