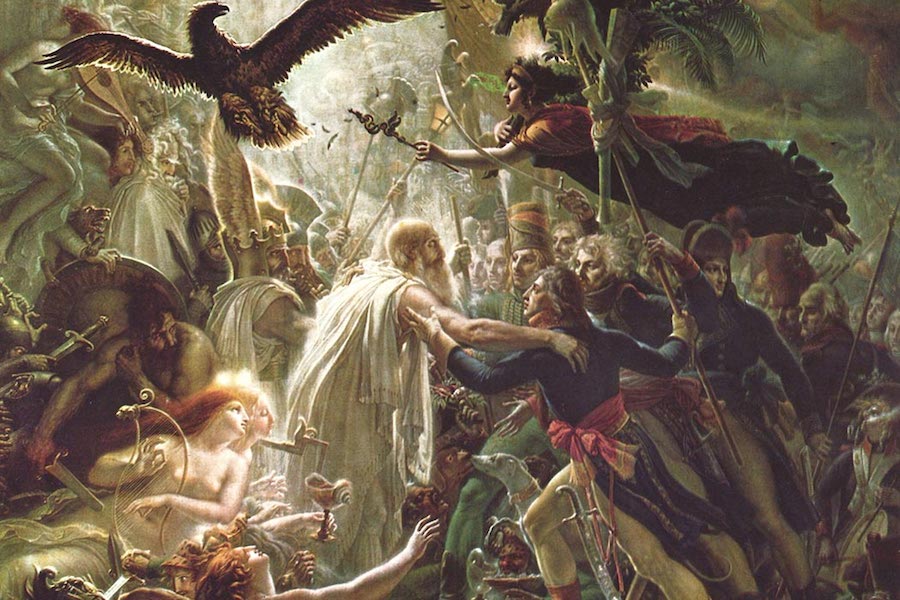 It’s Fleisher Discoveries, and I’m Kile Smith. Fleisher Discoveries is a podcast produced by the Edwin A. Fleisher Collection of Orchestral Music in the Free Library of Philadelphia. But you knew we’re a podcast, because you’re listening now, and you probably also knew that we’re on SoundCloud, all of our podcasts are, just go to SoundCloud, type in Fleisher Collection, and there we are.

I want to thank you for joining me today, for this, our second show featuring the Mexican composer Ricardo Castro, who lived from 1864 to 1907. Castro is a great example of the type of work the Fleisher Collection has done from the beginning of its founding in 1909, just two years after Castro’s death.

Edwin Fleisher began his collection by obtaining all the standard orchestral repertoire he could purchase. Then he traveled to European publishers and explained to them why it would be to their advantage to keep sets of their music in what was even then the world’s largest orchestral collection. So we have many works that were not even for sale, and we hold them archivally and for reference. Then in the 1930s the collection expanded to contemporary American composers, and in the ’40s, to Latin American composers.

That work is Oithona, a substantial concert overture or symphonic poem. You may remember from our last podcast that Ricardo Castro was making a career in Mexico and the United States as a concert pianist. He would later travel to Europe to play and to study composition, but he was composing all the while in Mexico. He was also helping to found performing groups and the National Conservatory of Music in Mexico City.

In 1885 and composing Oithona, Castro was just 21. Now, this is interesting, because we have here in Mexico a young composer so smitten with a Gaelic legend from the previous century that he wants to set it to music. It gets more interesting because it seems as though the legend was completely fabricated. Well, maybe not completely, but it’s a brilliant forgery. The Scottish author James Macpherson, who lived in the 1700s, broke onto the scene by claiming he had discovered these old legends that had been written down by an ancient poet named Ossian. Macpherson knew Gaelic and fooled a lot of people with his supposed translations, until scholars started to realize there were no sources for any of these stories. One name from the poems musicians will recognize—Fingal, from Mendelssohn’s Fingal’s Cave. That’s another story because the cave in the Hebrides, originally called in Gaelic “The Melodious Cave,” was renamed Fingal’s Cave only after Macpherson’s poems were published and gained an international audience.

Macpherson, who died in 1796, is credited with basically inventing Romanticism, and he did it with his hoax of made-up ancient legends. It was first embraced by German artists, and then took over Europe and beyond. Schubert wrote songs on these “Ossian” poems, translated into German. Niels Gade in Denmark composed Echoes of Ossian. One of the first languages Macpherson’s tales were translated into was Spanish, and so, they came to Mexico and to Ricardo Castro, in 1885.

The brief story is this: The hero, Gaul, falls in love with Oithona, the daughter of a king. But when the king and Gaul go off to war, another enemy kidnaps Oithona. When Gaul returns from war and learns what happened, he goes to rescue Oithona and does, but when he then revenges himself on the enemy, Oithona puts on a man’s armor to join in the battle. Well, you’ve probably guessed what happens next: She is mortally wounded and dies in Gaul’s arms.

That is the story of Oithona, and that is what Ricardo Castro depicts in this work of the same name. José Miramontes Zapata conducts the San Luis Potosí Symphony Orchestra in this live recording. The symphonic poem Oithona, by Ricardo Castro.

That was Oithona, a work from 1885 by the Mexican composer Ricardo Castro, in a live recording from 2014. José Miramontes Zapata conducted the San Luis Potosí Symphony Orchestra. The Fleisher Collection at the Free Library of Philadelphia provided the performance materials for this recording, so we’re proud to bring Oithona by Ricardo Castro to you today on Fleisher Discoveries.

By the way, Castro dedicated Oithona to Gustavo Campa, a composer and pianist friend of his. You may remember that Castro died only at the age of 43, and only months after taking over the directorship of the National Conservatory of Music in Mexico City. The man who succeeded him, and ran the school until his retirement in 1925, was Gustavo Campa.

Let us know how we’re doing on Fleisher Discoveries! Send me an email, kile@kilesmith.com. The Edwin A. Fleisher Collection of Orchestral Music on Facebook, leave a comment there give us a Like. Andrew listens from South Carolina and wrote in to say how much he enjoys hearing works by forgotten composers on Discoveries, and looks forward to hearing more! Thanks, Andrew, we appreciate it, and we’re also looking forward to more podcasts. It isn’t all forgotten composers or pieces, but there’s always something to discover, and that’s what we do on the Fleisher Discoveries podcast.