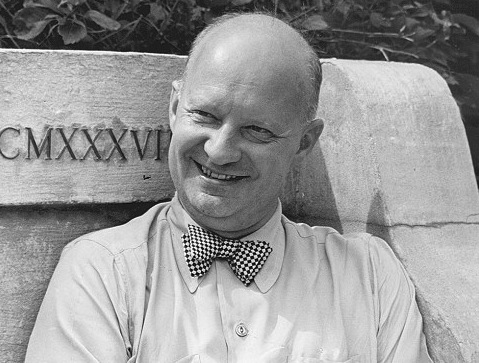 Today we’ll hear one of the great American symphonies, and it’s by Paul Hindemith. That’s right, the German composer wrote this the year he emigrated to the United States, almost as a calling card or thank-you to the country that took him in, but more on that in a minute.

If you listened to the last couple of Fleisher Discoveries podcasts, and aren’t all that familiar with what the Fleisher Collection is, you may be scratching your head over what I mentioned about the music, say, of Ricardo Castro, when I was talking about how his music was published but was lost until someone found it in Fleisher. And if you know something about orchestral music publishing, you may be questioning why someone could take music out of a library when, after all, that’s what publishers are for. And those are good questions.

But what happened when Edwin Fleisher was assembling his collection is this. He literally bought all the orchestral pieces, scores and parts (parts being what the individual orchestral musicians play from on stage), that he could find for sale. He was creating, after all, not a collection as such, but a library for the school he founded to teach young musicians how to play orchestral instruments. He called it the Symphony Club, and he founded it in Philadelphia in 1909.

When he bought all those—he had money from his family’s textile business, so he was well off—he then asked publishers for pieces that were not for sale, but which were available only on rental. He literally approached all the orchestral rental publishers in Europe (which is where most of them were), to give him rental works for the archives. The music wouldn’t leave the building, except in rare instances when publishers gave permission, but would be available for research.

And the publishers did just that. They were happy to, as it was safekeeping for them, kind of like the off-site cloud storage we have now for digital information. And it worked, because in the case of little-known composers, it was cheaper for publishers to give permission to Fleisher to lend something rather than re-print and ship from Europe. Now, for bigger-name composers, the materials never leave the building, but there are exceptions, if the publisher grants express permission. Perhaps it’s a little-known work that would need reprinting, and Fleisher actually lends its set back to the publisher. That’s happened a great number of times.

But in any case, Paul Hindemith is a good example of a big-name 20th-century composer, many of whose works are in the Fleisher Collection, even though as a rule they wouldn’t be lent to an orchestra. So why don’t we listen to a work of his, but since this is Discoveries, let’s make it a work that isn’t all that well known, relatively speaking, on orchestral programs. I love all his music. If you’ve heard only one piece of his, it was probably the Symphonic Metamorphoses or the Mathis der Maler Symphony.

But how about his symphony that’s just called Symphony? Like a Baroque or Classical composer he gives the name of it over to the key, so it’s called the Symphony in E-flat by Paul Hindemith. I mentioned earlier that he wrote it as soon as he came to America, and that was in 1940. Now if you know that Hindemith was German, and you know that 1940 was during World War II, you may guess that there was something behind the circumstances of his coming to the States, and you’d be right.

Paul Hindemith had a complicated relationship with his own country because, while he quickly became a famous composer in Germany in his 20s and 30s, because Hindemith was born in 1895, his 20s and 30s happened to coincide with the rise of Nazism in Germany. And in the mid-1930s, when Hitler was coalescing his power and the Nazis were deciding what was good music and art for the nation and what wasn’t, Hindemith ended up on the bad list. It certainly didn’t help when Hindemith was told to fire Jewish musicians and he refused, and it certainly also didn’t help that Hindemith’s wife was Jewish.

Music education was  something deeply important to Hindemith, and In the late 1930s he was in Turkey setting up a music school. While out of the country he took the opportunity to get to Switzerland. Then, opportunities opened up in America, so in 1940 he came to the States, taught at Yale and other places, and that summer he began composing the Symphony in E-flat while teaching at Tanglewood.

Although the composer, as was typical for him, didn’t have much if anything to say about what was behind this work, others have noted how American this symphony sounds. Well it’s a barn-burner to me; I remember hearing Riccardo Muti conduct the Philadelphia Orchestra in this in the ’80s, and that first movement shot out of the box and left me breathless. It’s in four movements: Lively and livelier, then very slow and broad, then lively again, and the last movement in moderately fast half-time. Listen to how he writes long-breathed fugal melodies throughout, and how at the end he builds it up to a huge finish. It’s great writing, and fantastic orchestral writing.

Leonard Bernstein conducting the New York Philharmonic in the Symphony in E-flat by Paul Hindemith. It was composed in 1940, the first year the German composer came to the United States, and the first performance of this was in 1941, the Minneapolis Symphony Orchestra under Dimitri Mitropoulos. I hope you enjoyed it, the Paul Hindemith Symphony in E-flat on Fleisher Discoveries.

Let us know how we’re doing on Fleisher Discoveries! You can send me an email, kile@kilesmith.com. The Edwin A. Fleisher Collection of Orchestral Music is on Facebook; you can leave a comment for us there and give us a Like. Ben lives outside of Philadelphia and wrote in to say that although he knows very little about classical music, he likes it and listens to it all the time, and that he really likes our podcast. Ben, that’s a great compliment and is exactly the kind of comment that makes my day. Thank you! Classical music is there to be loved by anybody. Knowing a little more about it helps, but it’s the music that grabs us, and if Fleisher Discoveries helps out in that, well, I think we’ve done our job here on the podcast, in the Fleisher Collection, and in the Free Library of Philadelphia.