Fleisher Discoveries: The Great Schubert, with a Twist 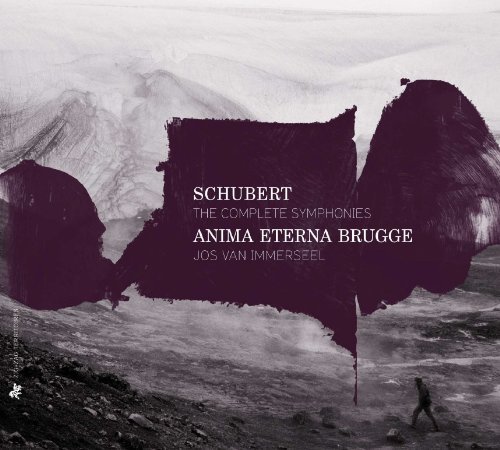 On the podcast today is a great symphonic work—actually, one of the greatest of all symphonies. Now, the word “great” gets thrown around a lot, but it happens to be the very word stuck to this symphony from almost the beginning, and, if nothing else, identifies exactly which symphony it is. I’m speaking of “The Great” symphony of Franz Schubert, in C major. Calling it The Great is helpful because half of the world knows it as Symphony No. 9, the other half calls it Symphony No. 8, but everyone calls it The Great.

More on the title and the music itself, but after our latest podcast on Ravel’s La valse, where we talked about Clint Nieweg and the hard work and minutiae of editing orchestral music, Dolores emailed us to say “Bravos to the brilliant and dedicated people at the Fleisher for their efforts.” Thanks, Dolores, and those bravos go to Gary and all the staff at the Fleisher Collection, to Clint and to the editors and engravers involved in the many projects being undertaken to bring the music to life.

I appreciate all of your comments, so send me an email, to kile@kilesmith.com. The Edwin A. Fleisher Collection of Orchestral Music is on Facebook, so you can leave a comment for us there and give us a Like.

The Great is sometimes called The Great C major because Schubert’s 6th Symphony is also in C and called The Little C Major. Usually, The Great is called the 9th in English-speaking countries, but it’s the 8th to German speakers and others, since that’s the number it has in the Schubert Editions that came out of Vienna.

The old edition or Ausgabe started work in 1884 with the general editor being none other than Johannes Brahms. But it was felt for a long time that a new edition was needed, as more research into performance practice came to light and more people were able to view Schubert’s own manuscripts. The new edition of the 9th Symphony didn’t appear until, believe it or not, 2002, five years after the bicentennial of Schubert’s birth.

However, the historical performance orchestra Anima Eterna Brugge in Belgium, led by scholar and keyboardist Jos van Immerseel, was given access to the manuscripts and to the editors working on the new edition, so in that Schubert bicentennial year of 1997, Anima Eterna came out with their recordings of all of Schubert’s symphonies, the first recordings to fully make use of the new scholarship and editing. Their Schubert 9th is the one we’ll hear in a moment.

Well, of course, they didn’t record all of Schubert’s symphonies. It turns out he composed 13, or started to, that is. Six he left unfinished. The one we call The Unfinished is only the least unfinished one of those.

As for The Great, it’s fairly certain that Schubert composed it in 1825 and 26, but it didn’t receive its public premiere until 1839, in Leipzig, conducted by Felix Mendelssohn—11 years after Schubert’s death. Schubert’s brother had shown the manuscript to Robert Schumann, who took a copy to Mendelssohn.

One aspect of The Great is unavoidable: its great length. It clocks in at anywhere from around 50 minutes to over an hour, which is Beethoven Ninth territory. We generally don’t see symphonies of this length until the 20th century. We are quick to say that Beethoven was ahead of his time, but if he was, Schubert, in this case, was walking side by side with him.

I’ve chosen this recording of the Schubert Ninth very much because I think you can appreciate the power of this unusual work. Anima Eterna Brugge is a historically informed, or period-instrument orchestra, using research into the instruments and performance practices of the times of the composers for music from Monteverdi all the way up to Gershwin.

With Franz Schubert they used reproductions of Viennese instruments from Schubert’s time, and in some cases, had new instruments built especially for these recordings. One ironic result of their studies into the practice of 1820s Vienna involves the pitch they would play at. Imagine, for instance, tuning a piano. What pitch do you tune it to? Generally, modern tuning for the A above middle C is 440, meaning that note vibrates at 440 cycles per second, although modern orchestras sometimes go a little higher than that. Renaissance tuning is higher, even a half-step or higher than that. Baroque tuning is lower, down to the 415 area, and the Classical period is a little higher with great variations. In fact, throughout music history different cities, at the same time, had different tunings.

So what did Anima Eterna conclude for Schubert’s Vienna? Well, their A is right where your piano is, or should be, right on the button of 440!

But beyond that, listen for the delicious sound of this orchestra. The smaller string sections—about half as large as most orchestras today—really give room to the wind players, whose sometimes wild colors create a powerful, intoxicating mix. Add trombones, which you never heard in a symphony until, you guessed it, Beethoven, and this Schubert Ninth leaps out at you.

The strings themselves are gut strings, which are both warmer and more intense in an incisive kind of way. The double basses, interestingly, are a combination of the 4-string ones, which look very much like today’s and also 5-string fretted instruments, more like the viola da gambas which double basses are descended from. This combination, Jos van Immerseel says, gives “both clarity of attack and plenitude of sound” to the bass section.

The entire orchestra sounds, to my ears, I don’t know, louder. But see for yourself; it’s quite a ride. The Great Symphony in C major of Franz Schubert, recorded in the Schubert bicentennial year of 1997, Anima Eterna Brugge, conducted by Jos van Immerseel.

Those colors we heard by this period-instrument orchestra fight against the amiable image we may have of Schubert. It’s a larger-than-life symphony, and this historically informed recording, using instrument reproductions and playing techniques from the time of the composer himself, breathe a kind of wild vividness into what we sometimes take for granted as “classical” music.

The Fleisher Collection has the edition of the Schubert Great Symphony that resulted from the research that went into this recording. The Schubert Neue Ausgabe, the “new” edition, is published by Bärenreiter, and the Fleisher Collection keeps on top of all the current developments in editions of the standard repertoire as well as uncovering surprises in the world of orchestral music.