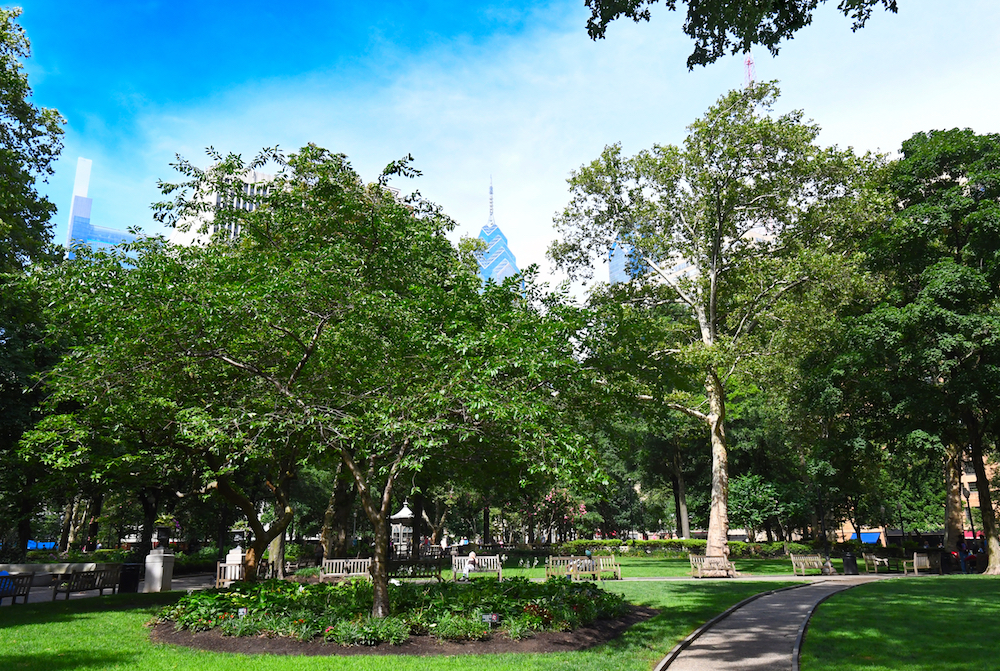 We’re in a celebratory mood, so here’s a unique work celebrating the city that the Fleisher Collection and the Free Library are in, Philadelphia. I say “unique,” because when it was completed in 1951, its composer Louis Gesensway said it “was the first and only symphonic music inspired by this city.” He may be right. The Fleisher Collection has a Philadelphia March Raynor Taylor composed in 1807, but he wrote that for piano. Former Fleisher Curator Sam Dennison orchestrated it in 1975.

From 1936 there’s a Robin Hood Dell Suite by Edmond De Luca. Not quite about Philadelphia, but the Robin Hood Dell, an amphitheater in the city’s Fairmount Park, was the former summer home of the Philadelphia Orchestra and still hosts performing groups today. If you’re old enough to know the famous recording orchestra the 101 Strings, you know the sound of Edmond De Luca, who composed for them.

Then there’s a piece I want to hear some day, the Philadelphia Symphony by, of all people, Gottfried von Einem and premiered, of all places, in Vienna, George Solti conducting the Vienna Philharmonic.* But Gesensway was still correct, because that didn’t happen until 1961,* about a decade after his work. Ormandy conducted it at the Academy of Music, which the piece is dedicated to, in 1962.

If anyone has recordings of any of these pieces, or knows of any other Philadelphia-inspired orchestral works, certainly let me know, kile@kilesmith.com, and we’ll do our best to track them down.

But that brings us to our work today, Four Squares of Philadelphia, by Louis Gesensway. The composer was born in Latvia in 1906, and at a very young age was brought to Canada by his parents. He was a violin prodigy, touring Canada as a soloist. The Toronto Symphony Orchestra was actually founded the year of Gesensway’s birth. It began life as an ensemble attached to a conservatory, became independent, then folded at the beginning of the First World War. After the war in the early ’20s Gesensway and a few others started it up again, and he wasn’t even yet out of his teens.

He came to Philadelphia to study at the new Curtis Institute of Music, and was soon invited by Leopold Stokowski to become a violinist in the Philadelphia Orchestra. It was 1926; he was 19 years old. Louis Gesensway played there for 45 years, taking a year off to study with Zoltán Kodály in Budapest, winning the Orchestra’s C. Hartman Kuhn Award for outstanding achievement in 1945, and retiring in 1971. He wrote books on harmony and violin technique, taught violin and composition, and passed away in 1976.

The four squares of the title are those green expanses of grass and trees originally laid out by William Penn for the north-south-east-west grid that is the city of Philadelphia. And they still exist today. Starting in the southwest and going clockwise as Gesensway does in his work, they are the Washington, Rittenhouse, Logan, and Franklin Squares.

A Prologue depicts the Philadelphia of William Penn’s time, and here is where the narrator recites Penn’s Prayer for Philadelphia. Oscar Treadwell narrated on the premiere and in this recording. Treadwell was a jazz broadcaster who spent most of his career in Cincinnati but whose early years were in Philadelphia. He was so beloved in jazz circles that Charlie Parker, Wardell Gray, and Thelonious Monk dedicated pieces to him.

The Quaker William Penn wrote this prayer in 1684, and today you can see it on a plaque erected by the Colonial Dames of America, near the southeast corner of City Hall. Part of it reads:

Oh that thou mayest be kept from the evil that would overwhelm thee; that faithful to the God of the Mercies, in the life of righteousness, thou mayest be preserved to the end.

Washington Square, which lies at 6th and 7th Streets, and Walnut and Locust, is closest to what is now called “Olde City,” and so in that movement we’ll hear authentic colonial street cries from vendors as they hawk their goods of charcoal, catfish, and cherries, along with the rag-and-bottle man. Among the cries are musical echoes of American and English tunes.

Then it’s to the west, between 18th and 20th Streets, and forward in time to Rittenhouse Square. The Curtis Institute sits on the edge of Rittenhouse, and the art shows of Gesensway’s time are still held there. It’s a busy afternoon filled with people young and old around the fountain, along the pathways, and between the tall London Plane trees. It’s one of the loveliest places in the city today, as it was 70 years ago when Gesensway composed this.

Due north to Logan Square at dusk, Gesensway pays homage to the public art here: the Calder sculptures personifying the Wissahickon Creek, and the Schuylkill and Delaware Rivers. Logan Square is much changed because of traffic routes but is still surrounded by grand architecture—by our own Free Library, the Cathedral of SS. Peter and Paul, and the Franklin Institute. In this movement chant drifts out through the open doors of the Cathedral.

Finally, east to Franklin Square at night—traffic from New Jersey rushing across the Ben Franklin Bridge spanning the Delaware River, snatches of folk music drifting in from neighboring Chinatown, and turn-of-the-’50s jazz emanating from clubs that used to be there. An Epilogue quietly evokes the spirit of William Penn as the night deepens.

Louis Gesensway calls Four Squares of Philadelphia “a symphonic tone poem for large orchestra, narrator, and street criers.” He wrote it over three years, completing it in 1951, and Eugene Ormandy conducted the Philadelphia Orchestra in the premiere in 1955, the composer himself playing in the first violin section, not sure why he had to play in his own premiere, but there you have it. They recorded it the following year for Columbia, it was re-issued by Albany in 1998, and that’s what we’ll hear now. Four Squares of Philadelphia by Louis Gesensway.

Four Squares of Philadelphia by Louis Gesensway in a 1956 recording, reissued in 1998, the Philadelphia Orchestra conducted by Eugene Ormandy. The narrator, reading William Penn’s Prayer for Philadelphia, was Oscar Treadwell. The street criers were not named, and I haven’t been able to find out who they were. Really some delightful writing and orchestrating here—so glad to have been able to bring that along to you.

Write in and let me know what you think of Fleisher Discoveries. Dolores wrote in to thank us for a year of podcasts and said, “You are providing such a service to composers and the entire music world.” Thanks so much for that, and you can send me an email, kile@kilesmith.com or find me or the Fleisher Collection on Facebook.

*correction of podcast, where I say Solti conducted the von Einem with the Philadelphia Orchestra in 1960.