Three Things I Learned from Wagner 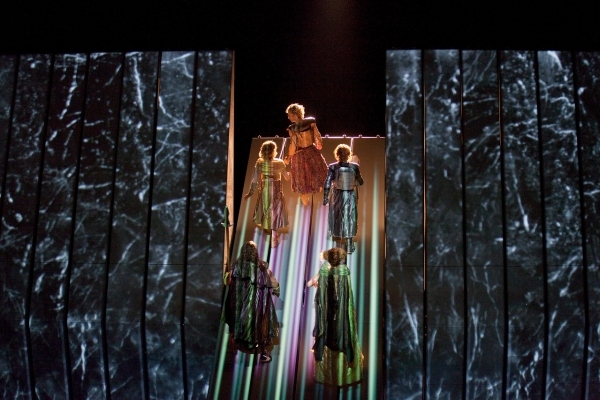 Das Rheingold at the Met. (Photo by Ken Howard/Met Opera.)

When we began staying home to combat the pandemic, the Metropolitan Opera began offering free Nightly Met Opera Streams from their popular Live in HD series. It was the seven straight nights of Wagner that got my attention: the four operas of Der Ring des Nibelungen between Tristan und Isolde, Die Meistersinger, and Tannhäuser, plus on Holy Thursday, when it is often performed, Parsifal. (Broadcasts continue through Sunday, April 26, ending with Rossini’s La Cenerentola.)

Our evenings haven’t all been free since, well, ever—no rehearsals, no concerts, no nothing—so my wife, Jackie, and I looked at all this Wagner, then at each other, and said, “Let’s.” We watched them all.The timing was perfect because I’m writing my first opera. The Book of Job will be a 75-minute opera for one soloist (Job) and chorus (God, Satan, and Job’s friends). The Crossing in Philadelphia and Conspirare in Austin, Texas, will premiere it in the 2021/22 season. I’ve completed the libretto (barring lots of editing) and have composed about one quarter of the music. Not the ending, though. Some think it’s a good idea to write endings first, but I never have.

First, demurrals. Wagner’s music is almost unrelentingly slow. It’s so often remarked on by non-opera lovers that I’d dismissed the observation. But it’s a common failing of people with some knowledge to ignore what non-experts plainly see. They’re right. It’s a problem. Only one kind of tempo—or only one kind of volume, key, color, character, mise en scène, anything—makes dramatic movement difficult. Not impossible: Wagner is a good dramatist. But even the most devoted Wagnerites make cuts in his operas to prod things along.

There are many dramatic missteps (Siegfried’s lollygagging in front of Fafner’s cave, for one), but the biggest is the ending of the Ring. I’ve never bought it.

No matter how much fire and water you spew around the stage, Valhalla always falls with a thud. The reason, I think, is that Wotan is no longer around. When Siegfried broke Wotan’s spear (an opera and a half earlier), Wotan just walked away. So why, at the end of the fourth opera, should we care? Wotan shrugged. Valhalla falling after that is just melodrama.

Here’s an idea: Siegfried lives, reclaims Brünnhilde, and together they ride into the flames to save Valhalla, failing and then dying, looking into each other’s eyes one last time.

Now, that would be an ending.

So much for misgivings. Here are three things I learned from Wagner:

Over all the dramatic horsepower, the vocal and instrumental firepower, and the harmonic innovation, Wagner stays true to the most important aspect of opera: it sings. “The oldest, truest, most beautiful organ of music, the origin to which alone our music owes its being, is the human voice,” Wagner wrote. The singing line is the greatest gift of Wagner.

He is as bel canto as Donizetti, as roof-rattling as Verdi, as delicate as Schubert. He paces smartly, giving the principals time to rest. Singers repeatedly mention how, after singing hours of Wagner, they feel…refreshed.
Wagner is simply one of the best vocal composers ever.

The operas are long—four, five, pushing six hours—but that isn’t what I mean. The almost interminable E-flat chord opening Das Rheingold isn’t the bigness I mean, nor the glorious extra brass, nor the new tubas he invented for the Ring.

No, it’s Wagner’s fearlessness that’s gigantic. He pushes all his chips to the center of the table, all the time. At every moment he’s all in, holding nothing back. He commits to every phrase; every note is a sacred note.

Each event is big and (usually) just right. Every prop is necessary; every utterance is life or death; every choice is irrevocable.

The music shoulders this same responsibility. “Aria” is too small a word to capture the singing. Consequently, most of the operas are a string of unending songs. The über-romantic chaos of his language reshaped the landscape, and the next century of composers had to grapple with him whether they liked it or not. Straining for every ounce of emotion, he chose chords and twisted tunes that could turn in any direction, forcing Western harmony to the breaking point. That this was no accident may be his most audacious accomplishment.

What surprised me most during this marathon was how like Mozart he is. “Certain things in Mozart can never be excelled,” Wagner said. Balance and clarity are everywhere. Walther’s Prize Song in Meistersinger is unsurpassingly delightful, but even his rival Beckmesser’s ludicrous ditty is an intricately counterbalanced reliving of Mozart’s Papageno or Leporello. Tannhäuser’s singing contest is also Mozartean with small touches expertly evoking character.

Even at the largest, loudest moments—Brünnhilde proclaiming, Wotan entreating, Alberich raging—Wagner’s lines are clear as crystal. Wagnerian bass René Pape says that singing King Marke in Tristan is like singing “chamber music.” The word that kept coming to me throughout all eight operas was “intimate.”

And the most intimate drama shows in the eyes. When Siegfried first sees Brünnhilde, when Isolde locks eyes with Tristan after their draught (poison? love potion?), when Hans Sachs looks at Eva and then shoos her away, knowing he can never have her, this is drama at its finest (by the way, Michael Volle as Hans Sachs in this 2014 production is the best singing actor I have ever seen). Amfortas gazing at the Grail, Kundry gazing at Parsifal—on that huge stage, with all those big voices and all those instruments, it’s the eyes that get you.

Writing the ending next would be a good idea. Job pleads for justice, but what he really desires is to see God. To make his case? Yes. To tell him off? Yes. To show God what he’s really done to him? Yes. But I wonder: What happens when Job gets his wish and looks into God’s eyes for the first time?

Now, that would be an ending.