Fleisher Discoveries: The Uncertainty and Hope of Ernest Bloch 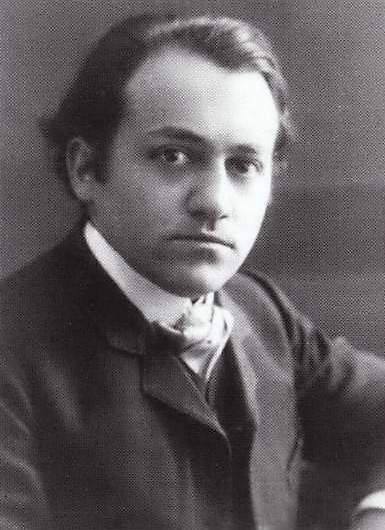 Hi, it’s Kile Smith, and welcome to Fleisher Discoveries, a podcast from the Edwin A. Fleisher Collection of Orchestral Music and the Free Library of Philadelphia. Gary Galván is curator of the Fleisher Collection. Every month we have a new podcast; we’re on SoundCloud and we’re on Spotify, so just type in “Fleisher Discoveries” there and you’ll find every one of our podcasts.

It’s September, which is always a time of transition, with the change to fall, with the leaving of summer behind, and for those of us in music communities, with our seasons gearing up for a new year. There’s going back to school for many, and that may involve moving to another city, too. I recently had to rent a truck to move a large item and they told me this was the busiest time of the year for them.

But this year it especially feels like transition because with the COVID-19 virus, so many things are unknown—with school, with work, with music, with everything. It feels as if the world is holding its breath. So in preparing for this month’s Fleisher Discoveries I looked for a work that spoke to me of transitions, and I think I found a good one, a work by Ernest Bloch, and one that there’s a good chance you don’t know, a symphony, his Symphony in C-Sharp Minor from 1902.

These and others, with their Jewish themes and titles reflecting the composer’s heritage, will also be getting a good bit of airplay on classical radio stations this month, with the great Jewish holy festivals of Rosh Hashanah and Yom Kippur in September. Rosh Hashanah is, of course—talk about transitions—the Jewish New Year.

But the Symphony in C-Sharp Minor is not one of Ernest Bloch’s more popular works. Well, that’s an understatement: it may be one of his least known. Still, it gives a good picture—a fascinating picture, I think—of the composer, of his life, and of his inner life of transitions.

Ernest Bloch was born in Switzerland, in Geneva, in 1880, so, eight years younger than Ralph Vaughan Williams, whose Pastoral Symphony was on last month’s Fleisher Discoveries. (All of our podcasts, by the way, you can still listen to, so check out that Vaughan Williams one if you haven’t yet.) The Bloch family was Jewish; in fact, a great-grandfather helped lead a synagogue in a Swiss village in the mid-1800s. When Ernest was 17 he went to Belgium to study violin with the great Eugène Ysaÿe, and composition with a student of César Franck. In quick succession he then studied in Frankfurt and Munich, and Munich is where he composed today’s symphony. Then to Paris, then back to Geneva, where he married, worked in his father’s clock business, and taught in the Conservatory of Geneva.

But soon he was on to the United States as a conductor for a dance company, and teaching at the brand-new Mannes School of Music in New York City, and then over to the brand-new Cleveland Institute of Music as its first director. It was at this time, in 1924, when Ernest Bloch became an American citizen.

But he wasn’t to stay put. He became the first director of the also brand-new San Francisco Conservatory for a few years. Then he returned to Europe in 1930, to Italy, but discovered that anti-Semitism was becoming ever more powerful. As he was now more well known, in particular for some of the Jewish-themed works we already mentioned, he returned to America, to reclaim, as it were, his New World citizenship. This was 1938. He joined the faculty of the University of California at Berkeley, where he taught, mostly during the summers, until 1951. He had moved to the coast of Oregon in the 1940s, where he continued to produce many works, and Ernest Bloch died in Portland, Oregon, in 1959.

It was a life of almost constant movement, and I imagine it reflected in this youthful Symphony in C-Sharp Minor, written when he was 22 years old. He later thought that it wasn’t a great work, and I’d have to say he’s right, as much as anyone can be right or wrong about these things, but I do think it’s something that at times can be just as valuable. It’s a fascinating work.

Life’s transitions are all packed into this,

seen through the eyes of a 22-year-old

The entire symphony, according to the composer, is an autobiography, and it roils with the passions and the uncertainty of a 22-year-old. Bloch at one time called the first movement the Tragedy of Life, with its struggles and doubts. Big names in the orchestral field, especially in the European circles of Ernest Bloch at the time, were Richard Strauss and Gustav Mahler. Some have pointed out similarities of the first movement to Mahler’s music, but in fact, Bloch hadn’t heard any Mahler when he composed this. It’s a big bruiser of an opening movement. If you’re in your 20s, see if it makes sense to you. If you’re past your 20s, by a little or by a lot, see if you can remember what your 20s felt like (I’ll bet you can), and see if you aren’t suppressing a smile.

The second movement, the Andante, is all happiness and faith, according to the composer. Bloch had a lifelong struggle with his Jewish faith. At times he held it at arm’s length, at times he embraced it as a belief and heritage. The importance of his own Jewishness was driven home not only by public anti-Semitism, but also by personal challenges, including one friendship he felt constrained to cut off. But, he also owned a crucifix, which he loved, and he had respect for Christianity, although on more than one occasion he said that no one could ever live up to it!

There’s a beautiful story told by Jacob Avshalomov, who was the longtime conductor of the Portland Youth Philharmonic, and also a composer well represented in the Fleisher Collection. Avshalomov visited the dying Ernest Bloch in a Portland hospital. He’d brought music scores with him to the hospital bed, including a mass by the Renaissance composer Josquin. Soon they were singing from it. Avshalomov said they were singing “in our cracked composers’ voices, regardless of the nuisance it might be to neighboring patients, oblivious to any incongruity of two Jews singing an ancient Catholic mass in a Protestant hospital.”

Ultimately, Ernest Bloch’s beliefs were an amalgam of hopes for the unity, and for the peace, of humanity.

The third movement is a huge Scherzo, complete with xylophone. Bloch called it his Irony and Sarcasms of Life movement. There’s a definite flavor of Richard Strauss here, and it leads to the finale of Will and Happiness, according to the composer, and a pretty impressive fugue. The transitions of life are all packed into this symphony, as well as ultimate fulfilment, all seen through the eyes and heard through the ears of the 22-year-old Ernest Bloch.

The composer conducted two of the movements in Basel a couple years after finishing it, but the complete premiere was in Geneva in 1910. Let’s hear it now.

The Symphony in C-Sharp Minor by Ernest Bloch, with all the transitions from tragedy to faith to sarcasm to happiness. In this recording from 1987, Stephen Gunzenhauser conducted the Slovak Philharmonic.

This is Fleisher Discoveries, and I’m Kile Smith, and I do like hearing from you! Send me an email, kile@kilesmith.com, check me out on Facebook, and do make sure to follow the Fleisher Collection on Facebook.

I remember when that 1987 recording came out, because I was the assistant curator at Fleisher then, taking care of the daily reservations of orchestral performance material. The record company Naxos, which is huge today, was just in its early years then, and making a name for itself by unearthing works to record that had been missed by the bigger companies. Naxos came to the Fleisher Collection because we have so much of this music.

I often spoke on the phone with the Naxos president, Klaus Heymann, and one of the works he ordered from us, under his Marco Polo label, was this, the Bloch Symphony in C-Sharp Minor. So I wrote up the order, apparently correctly, we shipped the music to Hong Kong, it then went to Bratislava for the recording sessions, and then it safely returned to the Collection.

Another recording made possible by the Fleisher Collection of Orchestral Music in the Free Library of Philadelphia.