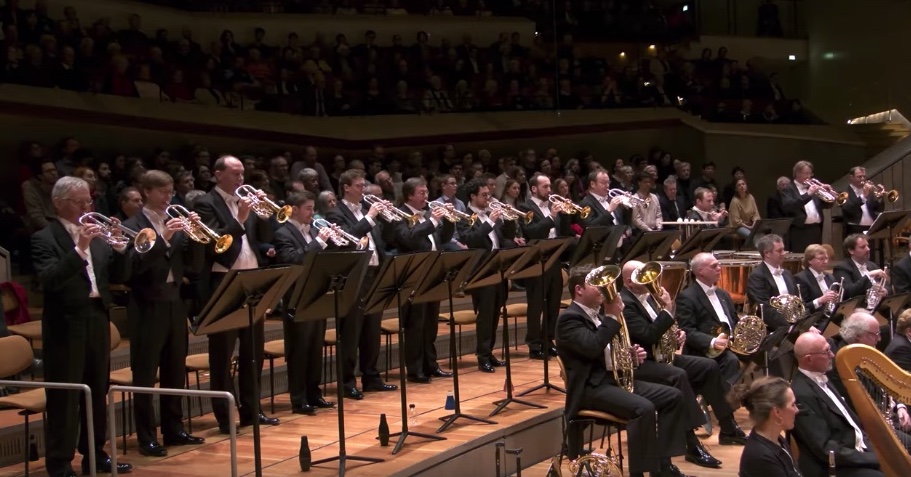 I’m not sure when it was, when I first heard this composer’s music, but I do know of two times I heard his music without knowing whose it was, and being bowled over by it. So I decided that whenever I heard something that knocked me out, and I didn’t know who wrote it, it must be Leoš Janáček. I don’t know that it’s an iron-clad rule, but I will say the more I hear Janáček’s music, the more I like him.

He’s one of those composers who falls in the cracks, and there are a few reasons for that. Frankly, the orchestral repertoire is heavily 19th-century, and he’s definitely a 20th-century composer. In itself that’s a little cockeyed because if we look at his dates we see he was born all the way back in 1854, and died in 1928. But, he was a late-bloomer as a composer, and his strongest pieces come to light in the 1900s—most from 1918 and after.

Janáček is Eastern European, specifically Czech, and so his music isn’t from the German or Austrian or Russian or French centers of power, it of course doesn’t sound English or American, so all those factors make it unusual to our ears. You could say, well, what about Dvořák, and Janáček loved and was greatly influenced by Dvořák, but of course, again, that’s the 19th century.

Leoš Janáček loved and collected folk music, mostly Moravian and Slavic, and those spices naturally entered into his music. There’s an exotic flavor in the harmonies, rhythms, and melodic patterns all through Janáček’s music. Also, there’s a kind of pugnaciousness in his music. Not off-putting, but he certainly doesn’t offer the cushiony bedspreads of melody that a Tchaikovsky or Brahms or Rachmaninoff might.

And, since the best of his work comes late, there’s not a huge amount of it. Much of that consists of operas, and opera is a subset—albeit with a significant and passionately devoted audience—but still a subset of the classical music world.

So, maybe Leoš Janáček falls in the cracks, but if you’ve never heard any of his music, I know a good place to start, his Sinfonietta for orchestra, written in 1926, just two years before he died. If you’ve heard only one piece of his, it’s probably this Sinfonietta, but more probably it was only the first movement, the tremendous Fanfare for brass and timpani, which starts like this:

And if you’re of a certain age and, like me, a fan of progressive rock, there’s a chance you also know Emerson, Lake & Palmer’s first album and the song “Knife-Edge,” which arranges that very Sinfonietta Fanfare of Janáček:

What is it about this Sinfonietta, then, and more generally, about Leoš Janáček, that attracts such attention? Let’s start with the commission for the Sinfonietta, which came from a gymnastics festival in Prague. Remember, this was 1926, and Janáček was already not only well established, but fairly famous by this time. He had a late start as I said, but it wasn’t as if he wasn’t doing anything. He taught, he ran a music school, he played and taught organ, he conducted choirs, he wrote music criticism, and he collected and arranged folk songs.

He was a leader in this, and this era, the late 19th and early 20th centuries, was absolutely bustling in folk music preservation. Béla Bartók and Zoltán Kodály in Hungary and beyond, Ralph Vaughan Williams in the British Isles, Charles Cadman and Edward MacDowell in the US, were all classical composers collecting, arranging, and/or using folk and indigeous materials in their own music.

And so was Leoš Janáček. It was a matter of preservation of indigenous ways, a matter of national pride, and frankly, an attempt to find a way forward in music. Wagner had soaked harmonies so full that many felt there was nowhere else to go, that music itself was about to sink underneath its own weight.

Leoš Janáček did not care for Wagner. He didn’t care for his teachers, either, and wasn’t quiet about it, which led to some rifts. Nor did he pull punches in his music criticism. That may be another reason for his late start, since one composer he offended also happened to be the director of the national opera company in Prague. When Janáček later brought his new opera Jenůfa to that company in 1902, the director did not forget, and rejected it. Janáček had to wait a few more years for its premiere, in another city.

Jenůfa is now a staple of the operatic repertoire, but in the early 1900s Janáček kept composing quietly. And, little by little, he started making headway. Operas, choral works, chamber music, entered the public consciousness, and finally, in 1916, Prague took on Jenůfa, it was a success, and his fame was assured.

Other successes followed, like the orchestral rhapsody Taras Bulba, and, by 1923, the great opera The Cunning Little Vixen. So when the Sokol Gymnastic Festival in Prague approached Janáček for a piece, they came to a national treasure.

This festival was huge, too. Founded in Prague, it was a decades-old movement of physical, intellectual, and moral health, and became an important facet of Czech nationalism at a time when the Czech and Slovak peoples were under Austro-Hungarian rule. Janáček dedicated the Sinfonietta to the Czechoslovak Armed Forces, and first called it the Military Sinfonietta, although he later removed the word “Military” from it.

After that opening Fanfare, Janáček named the movements after places in his hometown of Brno. The second movement is the Castle, then there’s the Queen’s Monastery, the Street Leading to the Castle, and finally, the fifth movement, the Brno Town Hall.

Janáček was 72 years old, and this music is a summation of all the work he had put in over the years in the folk music of his people. When you hear that opening Fanfare, listen for how natural it sounds, and yet can you find where the downbeat is? Everything about it is odd, or un-classical, you might say. The time signature is a simple 2/4, but the phrases are five measures long. Then he starts the melody, or the accompaniment, on the off-beat. Then he throws in 3/4s and other time signatures.

It sounds like two or three or four people all talking at the same time: everything is recognizable, but everything is off. And in fact, one aspect of his folk music research didn’t even involve music. Janáček would hear conversations and then write them down as music. This speech-music or speech-intonation shows up in his operas, and that essence, that punctuated off-rhythm, that liveliness permeates the Sinfonietta. It is as crazy and strong and real as friends in a tavern.

Even though the Sinfonietta is for full orchestra, the way he uses the instruments, and even some of the instruments themselves, are unusual. The Fanfare has 9 trumpets, where a regular full orchestra would have three. Also, two bass trumpets, which are marching band instruments, and two tenor tubas or euphoniums. Now, every once in a while an orchestral piece calls for one euphonium, but two? But they’re beautiful, and they’re literally the first sound you hear.

In the other movements he deliberately scoops out the middle of the orchestra and just leaves the highs and lows. Violins and trombones, or flute and piccolo with cellos and basses. The writing is so unusual that some have tried to “fix” his orchestrations, but they didn’t understand the textures, the gruffness, the punch he was going for. No one else in classical music sounds like Janáček.

One who understood that was Sir Charles Mackerras. The Australian conductor was born in, believe it or not, Schenectady, N.Y., but his family moved back to Australia when he was two. He later happened to study conducting in Prague under a friend and colleague of Janáček’s. Mackerras removed all the “fixing” that went on over the years, brought the scores back to where they ought to be, and he became one of the world’s great Janáček conductors.

The Sinfonietta by Leoš Janáček, with that Fanfare coming back at the end for that wild and powerful finish. The Vienna Philharmonic was conducted by the great Janáček scholar and conductor, Sir Charles Mackerras.

This is Fleisher Discoveries, and I’m Kile Smith, and I do like hearing from you! Send me an email, kile@kilesmith.com, check me out on Facebook, and do make sure to follow the Fleisher Collection on Facebook. Robert in Philadelphia wrote in to say “Thank you for your fine essay on Vaughan Williams and the Pastoral Symphony,” and that he finds Fleisher Discoveries “illuminating.” Thank you much for those words, Robert!

It’s a strange time we’re living in, no secret about that, but I hope you’re uplifted by listening to the Sinfonietta of Leoš Janáček. He hoped that the music he wrote for that 1926 gymnastics festival in Prague would succeed in celebrating “the spiritual beauty and joy” of free people, and their “strength, courage, and determination to fight for victory.”