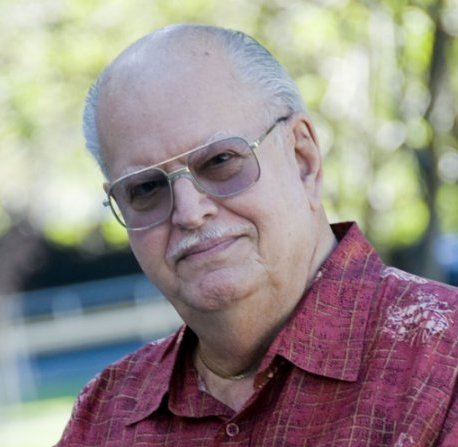 Aurelio de la Vega was born in Cuba in 1925 and lives in California, having come to the United States permanently in 1959, obtaining American citizenship in 1966, and teaching for many years at the University of California Northridge. He is performed nationally and internationally and is the recipient of awards and medals and honors too many to list here, including a Kennedy Center Freidheim Award and four Latin Grammy nominations.

He is 95 years old, and a wide-ranging composer of exquisitely detailed and emotionally moving music. We will hear two of his earlier works today on Fleisher Discoveries, his Elegy for strings from 1954, and his first symphony, the Symphony in Four Parts, from 1960. Both of these recordings have been captured for us as part of the American International Music Fund, which hundreds of recordings the Fleisher Collection is digitizing.

Before talking further about de la Vega, let’s listen to his Elegy, a gorgeous and ultimately uplifting work for string orchestra. This 1959 recording is not the premiere, that was by the Royal Philharmonic Orchestra in 1954, the year it was written. Alberto Bolet, older brother of pianist Jorge Bolet, was conductor and the dedicatee.

The performance we are about to hear, however, is from 1959 in Carnegie Hall, with John Barnett conducting the young players of the National Orchestral Association of New York City. I’m glad that young people were playing this, because the composer, in the notes he sent to me for this podcast, writes that the Elegy is about “the death of the composer’s first love, a girl he loved when both he and the beloved were 14 years of age.” It uses “Ariadne’s Lament,” the only music existing from Monteverdi’s lost opera, Ariadne; it alternates highly chromatic music with passages derived from Cuban peasant music; the bass uses what de la Vega calls “a constant cantus firmus based on a Cuban rhythm.” With all that, it is an astonishing and sincerely moving work.

The music is by Aurelio de la Vega, born in Cuba in 1925 and living in the United States. His Elegy, for string orchestra. John Barnett conducted the National Orchestral Association in Carnegie Hall in March of 1959. This is Fleisher Discoveries, and I’m Kile Smith.

The National Orchestral Association, by the way, is a worthy organization, founded in 1930 by Léon Barzin to train American students in the performance of orchestral music. It is related in purpose, therefore, to the Fleisher Collection’s beginnings, since the Collection began in 1909 as the Symphony Club, which Edwin Fleisher founded to train young Philadelphia students in orchestral and instrumental performance. The NOA and the Symphony Club were also at the forefront of knocking down barriers into the field of classical music to women and minorities.

Barzin was born in Belgium, came to the U.S. at the age of two, studied violin under Ysaÿe, played violin and viola in the New York Philharmonic, founded the National Orchestral Association in 1930 and was an excellent conductor and teacher of conducting. He moved to France in 1959, and his successor at the NOA was John Barnett, who led the fantastic performance we just heard by these young people.

The year 1959 has come up a couple of times already, and it figures importantly in the life of Aurelio de la Vega. He left Cuba in that year, as did Alberto Bolet, who was about to be arrested. Many left, of course, and continued to leave, including the composer Julián Orbón, who left in 1960.

De la Vega had already been outside of Cuba on a number of occasions previously, including to the U.S., to study, and to teach. Castro finally toppled the Batista government at the end of 1958 after five years of fighting. When de la Vega returned after concerts in the U.S., he says that he could tell the writing was on the wall for him and he would not be able to stay in Cuba. Also, as he told Bruce Duffie in a 1998 interview, “I don’t like dictators.”

“You would have to be pro or con” at that point, he related in Camilo Vila’s 2014 documentary Aurelio: Rebel with a Cause, and he realized that he couldn’t let his music do that. So he returned to California, and, he has written, “my existence was erased from Cuba’s musical world and my name disappeared as founder” of the music school of the Universidad de Oriente, in Santiago de Cuba.

As a prominent figure in Cuban musical life, including professorships, major commissions, being president of the Cuban National Music Council and music advisor to the National Institute of Culture, he was listed in Music in Cuba, Alejo Carpentier’s 1946 foundational history. But when the second edition came out in 1984, there was no mention of Aurelio de la Vega.

In the meantime, de la Vega landed in California and his professorship at the University of California Northridge, where he influenced generations of composers. He became an American citizen. His music is filled with color, riveting sound, and rigorous technique, all at the service of an intense passion for the emotions that are called forth by serious music.

But with all that, his interviews show him to be unfailingly humorous. A laugh by Aurelio de la Vega is never far away. Responding to why Cuban folk music doesn’t really play a role in his work, he responded, “I don’t play the maracas and I don’t move the hips,” and, of course, he laughs when he says this. Actually, he never was a fan of the popular music of his youth, the homegrown and the imported varieties from elsewhere in Latin America and the United States into Havana, the sons, the cha-cha-chás, the rumbas, the sambas. Rather, he loved Mozart, and later, Hugo Wolf, Schoenberg, and Alban Berg, writing a string quartet in his memory.

De la Vega used any technique that came to hand, trying, and then assimilating, atonality and quasi-tonality as in the Elegy, serialism, graphic notation and open-ended structures, chance music, and electronic music. This may sound forbidding, but it is all in the search for beauty. For him, music that needs explaining is already weak. As he told Bruce Duffie, “When I hear this over-use of explanations of a piece, I get very suspicious, because I never saw Brahms explaining any of his intermezzi. He just wrote the pieces, and that was it. Then, you just enjoyed the beauty of them.”

His first symphony is what we are about to hear, his Symphony in Four Parts. The four parts are an Overture, then a Hymn, an Ostinato, and finally, Toccata. Commissioned for the 2nd Inter-American Music Festival by the Venezuelan cultural patron Inocente Palacios, the symphony was composed in 1960 and premiered April 30th, 1961.

In fact, that was one week after the symphony we heard two months ago on Fleisher Discoveries by the Peruvian composer Celso Garrido-Lecca. Still, the performance wouldn’t have taken place without performance materials—and congratulations if you’ve already guessed that the parts were copied here at the Free Library of Philadelphia, in the Fleisher Collection of Orchestral Music.

The Symphony in Four Parts, the first symphony by Aurelio de la Vega, born in Havana, Cuba in 1925 and living in California. The National Symphony Orchestra was conducted by its music director Howard Mitchell in this world premiere performance from Howard University in Washington, D.C. on April 30th, 1961, as part of the 2nd Inter-American Music Festival. This recording was made possible by the American International Music Fund, and it has just been digitized by the Fleisher Collection.

An exciting piece, filled with power, beauty, and joy. And I think joy may be the key to de la Vega’s identity as a composer, and as a Cuban composer. He knows that Cuban music, even classical music, doesn’t have to have this or that rhythm or this or that folk element, or that a composer needs to address this or that political theme. To Bruce Duffie, again, he said, “Music should be a joyous act of creation. The music sometimes could be sad, or it could be dramatic, but it has to be a joy. It has to be something that comes from the inside, and is expressed in whatever vocabulary you’re using to express yourself. Whatever your style, it has to be an act of joy.”

And for those who disagree with him, Aurelio de la Vega says, “I shrug my shoulders … I keep silent … I leave to drink a good wine.”

Thanks to those who’ve emailed me. Thank you, Ricardo, and thanks, Bob, for writing in to say how much you enjoyed the Copland Tender Land podcast last month, and to Evan for saying how much you appreciate Fleisher’s taking on this reel-to-reel tape conversion project. It’s huge, as you can imagine! And all thanks to curator Gary Galván taking this on and getting this done.

As always, I appreciate that you are all out there listening. Stay tuned for more Fleisher Discoveries podcasts coming to you every month, right here.