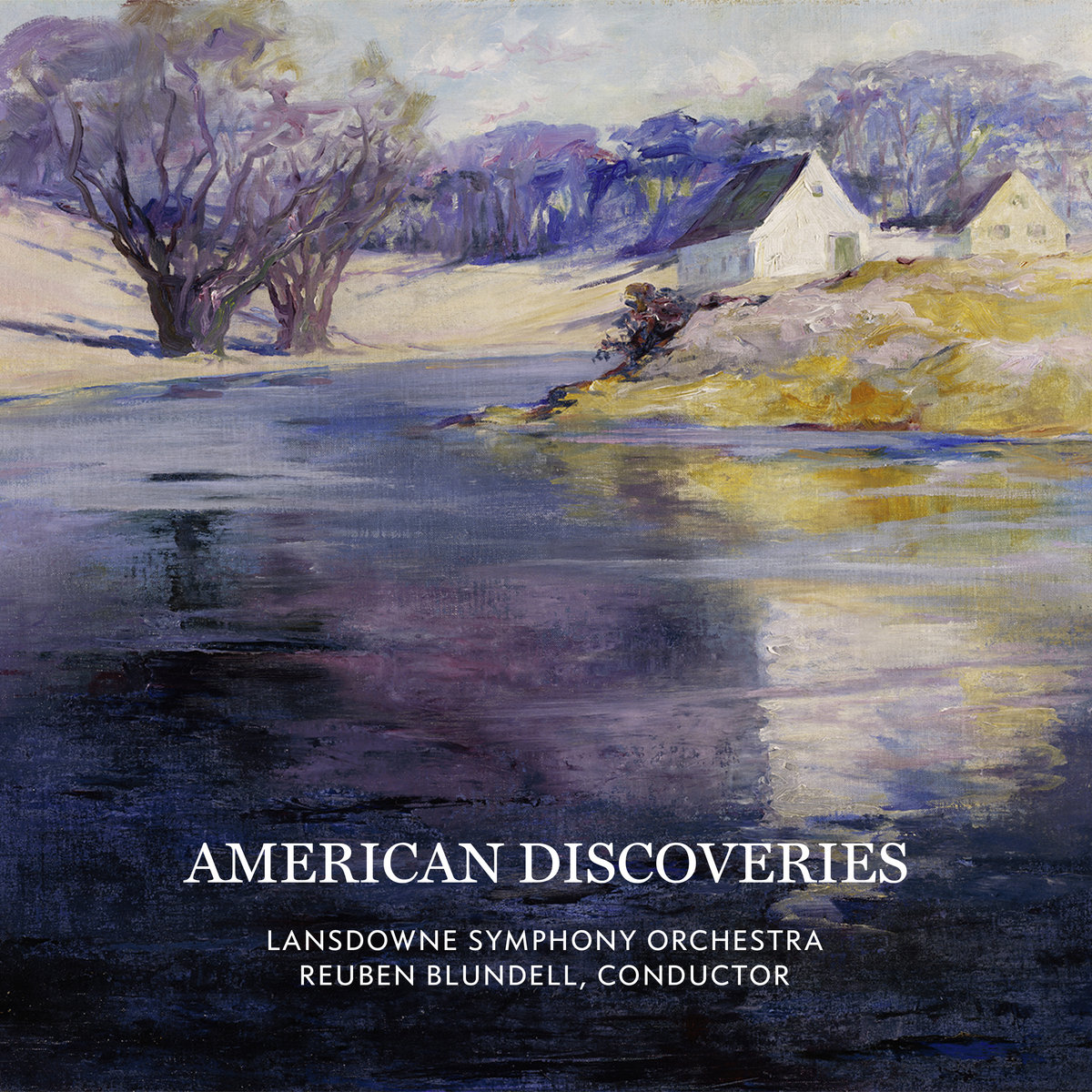 One of the joys I had when I was curator of the Fleisher Collection—and we’re coming up on 10 years since that was true—was to get to know some of the composers who had music there. I would meet them if they lived in or around Philadelphia, and seeing them in the Free Library, where the Collection is housed, or having lunch with them, was always a delight. Sometimes I knew them only by phone if they lived far away, or by email or by letter, back in those ancient days when we used to write letters.

But oftentimes I would get to know them only through their families. Speaking to spouses or children was a precious experience. Getting to know the person behind the music is always a good thing. Reading books about composers is of course a worthy activity, and reading the correspondence we have in the Collection is a rich source of information and character, but speaking to people who lived with or who knew them intimately is an invaluable way to bring into focus who a composer was. Even if all we’re interested in is the music, who the person is can tell us something about that.

The composer Alexandra Pierce died about a half a year ago, in February 2021, just a couple of weeks shy of her 87th birthday. She has two works in the Collection, a Symphony No. 2 called Dances on the Face of the Deep, from 1988, and Behemoth from 1976, which we will hear today on Fleisher Discoveries, from a new recording by Reuben Blundell and the Lansdowne Symphony Orchestra.

I recall having brief contacts with her during my time at the Collection, but I am so fortunate to have been able to speak with her son and daughter, in preparing for this podcast, and to learn something about the remarkable woman who created this music.

The outline of her life is this: Born in Philadelphia, family moved to DC, Bachelor in piano from Michigan, Master in piano from New England Conservatory, Master in music history from Harvard, PhD in composition and theory from Brandeis, studying with Irving Fine and Harold Shapero. Was an instructor briefly at MIT, at Rocky Mountain College in Billings, Montana, and at Antioch College in Ohio, and then from 1968, when she received her doctorate, until her retirement in 2001, was a professor at the University of Redlands in California.

Alexandra Pierce composed a few orchestral works, two of which, as I’ve said, are in the Fleisher Collection. She also wrote songs and choral pieces, but the majority of her output is chamber music. About a dozen of those are held in the Music Department of the Free Library of Philadelphia. Many of her works are published by Subito Music and available for sale or rental. 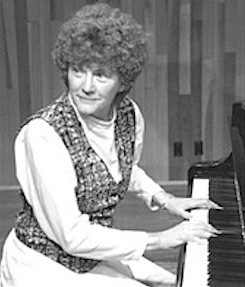 So far, what we see is the life and the output of a respected American classical composer of the middle 20th to early 21st centuries. Yet on closer inspection, some unexpected facts emerge.

The first is that Alexandra Pierce wrote books. One is on the shelves of the Free Library, Deepening Musical Performance Through Movement, the subtitle of which is “the theory and practice of embodied interpretation.” And then it occurs to you that you skipped right over one of those unexpected facts in her resumé, that her professorship at the University of Redlands wasn’t in music composition, but that she was Professor of Music and Movement.

And then, another book. Spanning: Essays on Music Theory, Performance and Movement. Then, two books co-authored with her husband Roger Pierce, Expressive Movement, and then Generous Movement, a Practical Guide to Balance in Action.

This is getting interesting, and seems to be a whole other life, and now I thank Alexandra Pierce’s children for putting the picture together. Benjamin Pierce is a Professor in the Department of Computer and Information Science, just down the road, it turns out, at the University of Pennsylvania. He’s written or edited at least seven books, by my count, on software programming and languages, and has written innumerable papers on these and other subjects, including security, object-oriented programming, climate change, and interactive fiction. He’s a photographer and describes himself as an amateur singer.

Daughter Jessica Pierce is a bioethicist, author of Run, Spot, Run and ten other books on dogs and the keeping of pets, and you can read her blog All Dogs Go To Heaven on the Psychology Today website. She’s written dozens of articles on pets at the end of their lives and on the links of morality between humans and pets. She’s been published in Scientific American, the Wall Street Journal, and the New York Times.

The portrait Jessica and Benjamin painted for me of their mother Alexandra and their father Roger, who lives in Colorado, was of a full, generous, and loving family. It was a jewel of a life in which composing was just one of the facets. It started in the 1950s, when Roger and Alexandra met at a party at a mutual friend’s house while on college break, and the romance seemed to take off at a second date at, of all places, Pete Seeger’s house. They married in 1956.

Roger came from the theater world, and wanted to discover how body movement affected acting. He taught at Stanford and at the University of California at Riverside, and he studied and taught rolfing. Alexandra, who was also keen to know more about how posture and movement affected musical performance, beginning with her own piano playing, took up Alexander Technique. Together, they created a poetry/performance group called Moving Voices, for which Alexandra wrote incidental music.

They created the Center of Balance, and taught movement and posture for musical performance, for sports, and for daily life. The rolfing and Alexander work moved into somatics later on, and all these principles of movement and balance they taught to their children. Jessica remembers yellow Post-It notes around the house as reminders, which she took as normal, but which her friends found strange and funny, notes with phrases like “Perch Head.”

She studied piano with her mother, and came to know her mother’s love for Schubert, Chopin, Brahms, and above all, Bach. Benjamin remembers falling asleep to strains of Schubert being played by his mother downstairs. Folk music was often heard in the house. Beethoven and Bartók were other loves, and surprisingly, the prepared piano music of John Cage, which inspired many pieces by Alexandra Pierce for prepared piano in the 1970s. Alexandra tried to get Jessica to compose for the prepared piano, but it didn’t take.

Their parents were so united in outlook that Jessica thought of them as “one parent with two halves.” They were devoted to each other, taught together, and wrote books together, often intensely discussing their work around the dinner table. Against this idyllic scene Jessica remembers trying to revolt, however, when in her teens she’d play the heavy metal rocker Ozzy Osborne in the house, loud.

But everyone got over that hump. Alexandra wrote many of her art songs for Benjamin, and choral works for high school choirs he sang in. Much of her music is inspired by animals, and by the Old Testament, and in 1976 the University of Redlands commissioned Behemoth for their orchestra. It also won first prize in the national music fraternity Mu Phi Epsilon’s competition that year.

What Benjamin remembers of Behemoth, besides possible influences of Mahler and Debussy, is the very beginning. The strings leads up to a big strike on the timpani. The hit is supposed to happen simultaneously with the strings, but in the premiere, right out of the box, the timpanist hit it late. There was the big chord, then an uncomfortable space, and then the big drum strike. While Benjamin thought his mother, the composer, must’ve been mortified, it soon became one of those inside family joke motifs. From time to time, one of them would sing it in the house: da dada dah daaah…bam!

Behemoth is inspired by the passage in Job, in the 40th chapter, where God describes his work of creation:

Look now at the behemoth, which I made along with you;
He eats grass like an ox.
See now, his strength is in his hips,
And his power is in his stomach muscles.
He moves his tail like a cedar;
The sinews of his thighs are tightly knit.
His bones are like beams of bronze,
His ribs like bars of iron.
He is the first of the ways of God;
Only He who made him can bring near His sword.

Behemoth is in five movements. The longest is the first, at only about five and a half minutes. Percussion is insistent throughout this tone poem, we might call it, but for most of the time it is gentle. Predominating are snare drum and temple blocks, a set of tuned wood blocks quite popular in mid-20th century orchestral works. Sometimes they imitate or presage music played by the rest of the orchestra, sometimes they stitch it together.

There is no discernable template the music follows in relation to the Job text, but what occurs to me is that this is a grasping after the mystery of what a behemoth might be. The biblical word may not even be originally Hebrew but Egyptian. It may refer to the hippopotamus, but no one really knows. Along with the sense of awe and power Alexandra Pierce invests in this music, is a very real sense of humor.

Reuben Blundell leading the Lansdowne Symphony Orchestra in Behemoth by Alexandra Pierce, composed in 1976. This is from the newly released American Discoveries CD by Lansdowne, and the Fleisher Collection has been happy to work with them on this and other recordings.

This is Fleisher Discoveries and I’m Kile Smith. By the way, I’ve been pronouncing this work behHEEmuth but Alexandra Pierce’s children both tell me that she pronounced it BAYuhmuth. It’s another of the mysteries surrounding this animal, how even to pronounce its name! This creature from the Book of Job looks at us from the mists of time, from the creation of the world, and this music asks us to pause and consider our relation to it and the creator, just as Job was confronted with it.

What a remarkable woman Alexandra Pierce was, to create this strangely affecting work. And beyond, to create such a fascinating life, with her loving husband and co-worker Roger, with her devoted, brilliant, and remarkably accomplished children Benjamin and Jessica. It’s been such a pleasure for me to get to know them, and to get to know this music of Alexandra Pierce. I hope you’ve enjoyed the journey, too.

The Fleisher Collection is on Facebook, and I’m on Facebook, Twitter, and now Instagram, and my email is kile@kilesmith.com. Let me know how you liked the music, and how you liked this installment of Fleisher Discoveries. As always I do appreciate that you’re listening. Stay tuned for more Fleisher Discoveries podcasts coming to you every month, right here.