Iowa, Paris, Russian and Ukrainian and German Americans, New York City, a Swiss watch company, a radio station, a library, salvaged reel-to-reel tapes, and a dandy piece for cello and strings: Only in America. 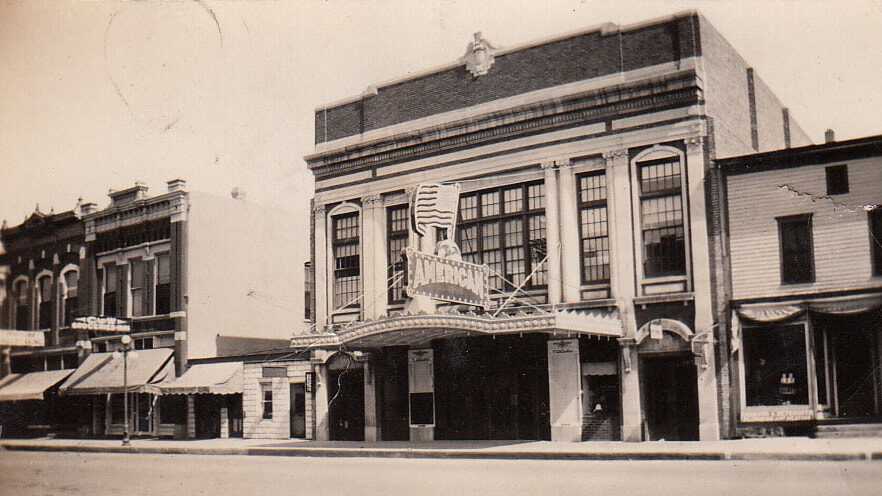 It occurred to me, the more I looked into this show, how truly American a story this was. Only in the United States of America would, or could, all the elements possibly come together to make this recording happen. But what was even more remarkable was how unremarkable it was; that it took so long for this to occur to me.

At the center of the story is the composer, Roger Goeb, from the center of the country, born in Cherokee, Iowa. The Little Sioux River runs through Cherokee. It’s the home of American Natural Processors, a food processing plant, of Americold Cold Storage, of the Sanford Museum & Planetarium, of a Hy-Vee Distribution Center. It has a Main Street and a Roosevelt Avenue, four parks, a municipal airport, the Cherokee County Fairgrounds, ball fields, a golf course, and since 2019, a disc golf course.

Roger Goeb was born and raised here. He was well acquainted with music, but as he related in a 1989 interview with Bruce Duffie, the music he knew was mostly jazz. He could play the piano, trumpet, woodwinds, and more, but when he went to college it was to study agriculture.

But when he heard Beethoven played at a concert of the Budapest String Quartet, he changed his mind, and decided to become a composer. Then he went to Paris, studied with Nadia Boulanger, came back to New York, studied with Otto Luening (who was born to German parents in Milwaukee, and who became a pioneer in electronic and tape music).

Roger Goeb continued his studies at the Cleveland Institute and the University of Iowa, then started teaching music, at Bard, Juilliard, Stanford, Adelphi College, received two Guggenheim Fellowships, and it was at this time that he composed the work we’ll hear today, the Concertante II for Cello and String Orchestra.

He went on to compose five symphonies, and most of his works are instrumental. He wrote, as far as I know, only one vocal work and two choral works, but many chamber and orchestral pieces, including more than a dozen concerto-like works. While he has American Dances, Prairie Songs, and even an Iowa Concerto, most of his works have non-descriptive titles such as symphonies, sinfonias, quartets, concertos, concertinos, and concertantes like today’s work.

Goeb was teaching most of the time and reserved his composing for the summer months, but he was performed often in the 1950s and ’60s, with a good number of recordings coming out, most famously his Third Symphony with Leopold Stokowski and the CBS Orchestra.

Sadly, he stopped composing for a decade to care for his wife and a son who were suffering from multiple sclerosis, and they both eventually died. He then picked up composing again, and completed many works, including two symphonies. Roger Goeb died in Queens, New York at the age of 82.

So that’s one part of this American story. Here are the others, and for those we turn from Queens to Brooklyn, where cellist Richard Kay, our soloist today, was born. He studied at Juilliard and immediately began playing solo recitals, gaining notice and good reviews in New York and beyond. He soloed with the New York Philharmonic. He was principal cello in the Longines Symphonette. He concertized throughout Asia for the State Department, and continued to give recitals, solo and with his wife, the soprano Helen Rosengren. In 1961 he became the assistant principal cellist for the Metropolitan Opera Orchestra, playing with them for 38 years. Richard Kay died in 2005.

But what about that Longines Symphonette, do you remember them? A radio program on the old Mutual Broadcasting System, original home of The Lone Ranger and The Adventures of Superman, the Longines Symphonette played standard classical repertoire and light classics, and produced many LPs and boxed sets. It was sponsored, of course, by the Longines watch company, whose slogan at that time was “The World’s Most Honored Watch.” They were a Swiss company, but for decades had a significant American presence, first from sports timing stopwatches, and then for high-end timepieces hawked by celebrities the likes of Humphrey Bogart and Audrey Hepburn.

The conductor for most of the run of the Longines was Mishel Piastro. The Ukrainian violinist studied in St. Petersburg with Leopold Auer, and played for Serge Koussevitzky while still in Russia. He premiered the Glazunov Violin Concerto, gave 500 concerts in Asia from 1915 to 1920, and then gave a recital in Carnegie Hall in 1922 and never went back. He was concertmaster and assistant conductor of the San Francisco Symphony, and in 1931 Arturo Toscanini hired him away to become concertmaster of the New York Philharmonic. Mishel Piastro died in 1970.

Koussevitzky turns up in our story again because it was his foundation that created and funded the American International Music Fund, whose archives and all recordings are now being digitized by the Edwin A. Fleisher Collection of Orchestral Music.

And the orchestra for this American story of Iowans and New Yorkers and immigrants is something called the American Virtuosi. Try as I might, I haven’t been able to find out what that is. They are not the later American Virtuosi, the chamber orchestra founded by Kenneth Hamrick in 1992 in New York. This American Virtuosi was, for this 1958 recording, the house band for radio station WNYC, at least for this recording. The principal players may very well be the WNYC String Quartet—can you imagine, a radio station funding its own classical ensemble? That sort of thing happens in Europe but it did, for a time, exist in the States, or at least in New York City.

So, a work by Iowan Roger Goeb, who studied in Paris with Nadia Boulanger, then with the German American Otto Luening from Milwaukee, played by Brooklynite Richard Kay, soon to be with the Metropolitan Opera Orchestra, and a string orchestra called the American Virtuosi, conducted by the Ukrainian American and former New York Philharmonic concertmaster Mishel Piastro, broadcast from the studios of WNYC, and the recording all funded by the estate of Russian American Serge Koussevitzky.

But what of the music? The Concertante for Cello and Strings is in two movements, and the more I listen to this the more I like it. It is agreeably impertinent, and efficiently gets on with its business. Roger Goeb seems to have a no-nonsense view of music in that he wants his lines to soar, and his harmonies to support and not intrude. But there’s a slyness to it and a hidden strength, almost a humor such as when the ending sneaks up on you. But not a joke.

It is so well balanced it reminds me of classical music; that is, music from the Classical period. And that even goes to the essence of the work itself, as revealed in its title, for this Concertante for Cello is actually for bassoon or cello and for string quartet or string orchestra, which is a charming throwback to earlier times, when this type of thing was done quite often. It is only 13 minutes long and I hope you enjoy it. It’s wonderfully performed, with vigor and warm emotion.

The Roger Goeb Concertante II for Cello and String Orchestra on Fleisher Discoveries. Richard Kay is the soloist, and from the WNYC radio studios in 1958, Mishel Piastro conducts the American Virtuosi.

Richard Kay was the cellist, and Mishel Piastro conducted the American Virtuosi in the Concertante II for Cello and String Orchestra by American composer Roger Goeb on Fleisher Discoveries. This was recorded for broadcast in the studios of radio station WNYC in New York City in 1958 under the auspices of the American International Music Fund. This is Fleisher Discoveries and I’m Kile Smith.

I left one piece out of this uniquely American story that led to the creation of this piece by Roger Goeb in 1951 and its eventual 1958 recording here. The Koussevitzky Foundation ran the American International Music Fund and tapes were housed in various places around the country, as we’ve detailed on previous podcasts, and the Fleisher Collection has brought these all back to life by salvaging the reel-to-reel tapes, under the direction of its curator Gary Galván. The other piece of the story, of course, is that Fleisher’s own family came from Russia a generation before Edwin, who was born in Philadelphia in 1877. The Fleisher family was in the fabric business, and Edwin, an amateur violinist and violist, founded the Symphony Club in 1909 for Philadelphia boys and girls of any race to learn the symphonic repertoire. The music he purchased from around the world became, in 1929 at the Free Library of Philadelphia, the Edwin A. Fleisher Collection of Orchestral Music, the largest collection of its kind in the world. Only in America!