The world premiere of a piece remembering a tragic day many Novembers ago, and the unlikely but wise choice of its composer. 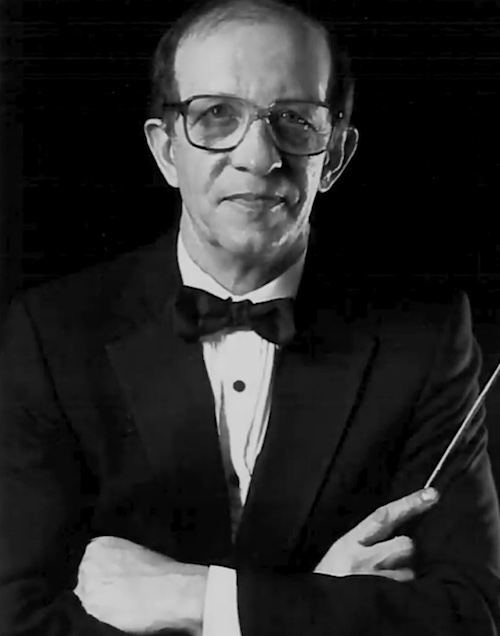 When November rolls around, one of the thoughts sure to make an appearance is what we’ll be doing for Thanksgiving. I hope yours is a warm and lovely one this year, wherever you’ll be on November’s last Thursday. But if you’re of a certain age, one of the other thoughts that comes unbidden every November is the remembrance of one of the dark days in American history, November 22nd, 1963, the assassination of President John F. Kennedy.

Just as many remember exactly where they were when they heard certain news on September 11th, 2001, many of us remember November 22nd, 1963. I was in 2nd grade, we had just finished lunch, and our teacher told us in somber tones that the President had just been shot, and that the school would be sending us home for the day. The seriousness of the event didn’t fully sink in, warring as it did against a 7-year-old’s emotion of being let out early from school, until, walking down the stairs on the way out of our small building, I saw our janitor crying. It was the first time I saw an adult man cry.

All those Novembers since, I remember that. But going back though the 20 years of Fleisher Discoveries, back to the first radio broadcast in 2002, I see that we’ve never taken the occasion to memorialize this President, taken from us too soon. We rectify that this month in Fleisher Discoveries, with the help of a live recording from the American International Music Fund archives. These comprise hundreds of reel-to-reel tapes, digitized by the Fleisher Collection under its curator Gary Galván.

In 1966, the associate conductor of the Pittsburgh Symphony Orchestra, Henry Mazer, commissioned Robert Bernat to compose a tribute to JFK for a November 25th concert. William Steinberg was Pittsburgh’s music director, but Mazer would be conducting this concert, and Mazer, a Pittsburgh native, turned to Bernat, who was born in nearby Johnstown. Bernat had taught at Bethany College in West Virginia, Brandeis in Massachusetts, Ohio State, and the University of Pittsburgh, and would finish his teaching career at Indiana University of Pennsylvania. He had studied at Carnegie Mellon and at Brandeis, and also with Aaron Copland at Tanglewood.

Bob Bernat was a wise choice for this occasion, because even though he had reliable academic credentials, he always wanted his music to speak directly to audiences. Not that a university degree in composition removes the desire to write for a general audience, but one doesn’t always follow the other.

In any case, Bernat was well grounded in music for the people. When he was four a grandfather put a violin in his hands and taught him country fiddle playing. He was a professional jazz saxophonist and clarinetist in his teens, and it seems that the love of entertaining people with music never left him, as we’ll see later.

For his Pittsburgh Symphony commission, he turned to another non-academic source, the shape-note hymn writing of that pioneering American composer William Billings. Bernat chose what must be the most widely sung piece by Billings, “When Jesus Wept.”

It’s a Sunday School joke to claim John 11:35 as your memory verse, since, with two words, it’s the shortest verse in the Bible: “Jesus wept.” But there’s a story behind it. Lazarus and his sisters Mary and Martha were friends of Jesus. When Lazarus falls ill the sisters send for Jesus to come and heal him. Jesus, however, doesn’t leave right away, and when word comes that Lazarus has died, Jesus, it is reported, weeps. He does finally come and restores Lazarus to life, calling him out of his tomb, but those two words—Jesus wept—have haunted readers through the centuries.

The William Billings piece is a round built on these words:

When Jesus wept, the falling tear
In mercy flow’d beyond all bound.
When Jesus groan’d, a trembling fear
Seiz’d all the guilty world around.

A round or a canon, like “Row, row, row your boat,” is a tune started by one voice, then repeated a brief starting time later by another voice while the first voice is still singing. Add a third and fourth voice, and the intricate consequences of a seemingly simple tune are delightfully revealed. The Billings tune is a marvel of naturalness and ease, and this round has gone around the world. Here’s “When Jesus wept” sung by a Viennese choir, the Amerlingenchor.

That haunting tune by William Billings is the basis for the work Robert Bernat wrote in 1966 to memorialize the late President. The piece is called In Memoriam John F. Kennedy, a Passacaglia for orchestra, a passacaglia being a set of bass notes or harmonies repeated over and over. You’ll hear “When Jesus wept” throughout the piece, and it is not only a striking, but a fitting memorial, not only to the President, but to each of us as we remember—as it was still so vivid in 1966, just three years after the assassination—as we remember how we felt when we heard that he had died. Every November I think of that janitor, weeping.

So here’s the world premiere performance of In Memoriam John F. Kennedy by Robert Bernat. It took place on November 25th, 1966 in the Syria Mosque in Pittsburgh, Pennsylvania. Henry Mazer leads the Pittsburgh Symphony Orchestra.

When I was speaking earlier about Bernat’s life in academia as related to his upbringing in folk music and jazz, I think the composer put it into perspective best. Writing about In Memoriam John F. Kennedy, he said, “I tried to build the kind of piece that would be accessible to as many listeners as possible without compromising my own musical ideals.” After hearing his music, I think that’s it in a nutshell. This is Fleisher Discoveries, and I’m Kile Smith.

That Syria Mosque, by the way, was a huge venue built by the Shriners and was for generations a busy concert hall for all sorts of events, including the orchestra. Bob Dylan, Louis Armstrong, The Who, Duke Ellington: the biggest rock, jazz, and other events were held there until it was torn down in 1991. The very first national television broadcast in the country started right there, on January 11, 1949, with Pittsburgh country star Slim Bryant and the Wildcats headlining. It was a joint venture of the DuMont, ABC, CBS, and NBC networks and after an hour from Pittsburgh, Arthur Godfrey, Milton Berle, and many others joined in the coast-to-coast broadcast.

The composer Robert Bernat would continue to teach and compose after this 1966 highlight of his career, but his longest-lasting influence in music was still to come. In the ’70s he was asked by the great English band composer and conductor Elgar Howarth to write for the world-famous Grimethorpe Colliery Band, which was touring the U.S. Bernat wrote Dunlap’s Creek and was hooked on band music. He traveled to England to learn all about the great tradition of amateur bands populated by mill workers and coal miners, and in 1981 founded the River City Brass Band in Pittsburgh. Their first rehearsals were held at the Iron City brewery.

Robert Bernat turned it into not only one of Pittsburgh’s great musical gifts but a worldwide attraction. Now celebrating its 40th anniversary, River City Brass continues as the nation’s only full-time professional brass band, and it is now, fittingly, led by a former conductor of the Grimethorpe Colliery, the award-winning tubist James Gourlay.

The Fleisher Collection is on Facebook, and I’m on Facebook, Twitter, and Instagram, and my email is kile@kilesmith.com. Let me know how you liked this installment of Fleisher Discoveries. Peter wrote in to say that he’s received our emails for years and especially liked last month’s show on Roger Goeb. It’s still up, as are all our podcasts, so listen in any time! As always, I do appreciate that you’re listening. Stay tuned for more Fleisher Discoveries podcasts coming to you every month, right here.