A passacaglia is an ever-unfolding imagining of a single theme, over and over, like the living of a life. 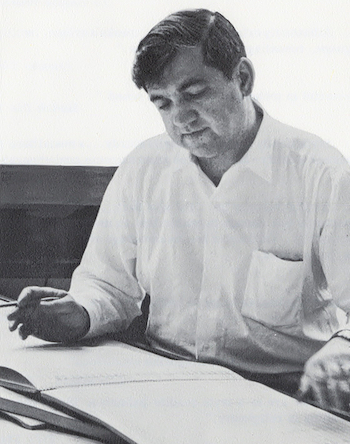 As I pulled off the small winding road into the driveway, I thought this to be the perfect house for a composer. I was in Bryn Athyn, a suburb of winding roads, winding creeks, extensive woods, and a magnificent cathedral just north of Philadelphia. The house was an old stone house with small windows, thick walls, stucco-covered and white, with a slate roof. It could be two centuries old, large for its time but modest now, three stories but the third tucked under the sloping roof. A generations-old addition on one side increased its size by a third. A large beech tree held down one corner of the property. Yew bushes and boxwoods somewhat shielded the house from the road, and a side yard dropped down through woods to a run that fed a larger creek not too far away. Perfect.

I pulled into the driveway and Miryam Yardumian opened the back door to greet me. This had been her father’s house, composer Richard Yardumian’s house. She was the artistic administrator at the Baltimore Symphony Orchestra, but this is where she grew up.

Her father had passed away in 1985. His wife Ruth, Miryam’s mother, died in 1996, so I’m remembering this from a quarter of a century ago. I had been at the Fleisher Collection for 15 years already and would be there for another 15, but this was three years into my tenure as curator. I didn’t realize it then, but my visit there brought the Yardumian and Fleisher connection full-circle.

Tom Broido of the Theodore Presser Company, Yardumian’s publisher, was also at the house, and we were there to help with her father’s music as Miryam prepared the house to be sold. Tom would take most of the printed materials back to the Presser offices, and they were grateful for the Fleisher Collection to house the manuscripts. That’s why I was there, to take the Richard Yardumian manuscripts, some scores and other papers back to the Free Library of Philadelphia for safekeeping. One of the titles of his in the Fleisher Collection is the Passacaglia, Recitatives and Fugue for Piano and Orchestra, which we’ll hear today on this edition of Fleisher Discoveries.

Family was important to Richard Yardumian. He was the youngest of ten children, and he and Ruth had thirteen. Faith was also important. His parents were new immigrants to Philadelphia from Bulgaria but they were Armenian, and his father, the Rev. Haig Yardumian, founded the Philadelphia Armenian Congregational Church, now the Armenian Martyrs’ Congregational Church in Havertown, outside of Philadelphia to the west. Richard’s wife Ruth was a member of the Swedenborgian Lord’s New Church in Bryn Athyn; he later joined that and became its music director.

The third important aspect of Yardumian was that Armenian heritage. We can see that from his most well-known work, the Armenian Suite, which was also his first important work. He began to compose the Suite even before he had any professional training, when he was 19, although his mother Lucia was an organist and his oldest brother Elijah, a pianist who went to Curtis and who later founded the Drexel Hill Conservatory of Music, helped to teach him. Already at 14 he was composing works based on Armenian folk and church music.

At 21 he did take lessons in piano, harmony, and counterpoint, but, perhaps because he didn’t matriculate at any university he began to formulate his own ideas about music theory. He resolved to find a way to make sense of all 12 tones without resorting to the Schoenberg school, and many of his earlier works build harmonies from stacks of major and minor thirds. There is a definite modal quality throughout all of his music, whether it is heavily chromatic or not—that is, it sounds tonal, but it doesn’t always progress the way tonal chords would progress.

It’s fascinating to listen to, and fresh, and now would be a good time to listen to his Passacaglia, Recitatives and Fugue for Piano and Orchestra. Last month’s Discoveries, you may remember, looked at another Philadelphia composer, George Rochberg, whose Symphony No. 1 recording was with Eugene Ormandy and the Philadelphia Orchestra in March of 1958. Today we’ll turn the clock back only two months, to January 4th, 1958.

It’s a rousing performance. A passacaglia is a recurring line, short or long—often in the bass but it can be anywhere in the texture—treated in various ways. The effect is similar to that of variations on a theme. It’s an ever-unfolding imagining of a single theme, over and over, like the living of a life, and so, I like to think of this as Yardumian imagining his life, and those common themes of family, faith, and heritage, again and again. The solo piano has a sometimes introspective, sometimes heroic concerto-like voice as the orchestra rises and falls around it. In the second section, the recitatives give ample space over to solos for cello, horn, and oboe as well as piano, and then the brass herald the entrance of the final Fugue.

On Fleisher Discoveries, the Passacaglia, Recitatives and Fugue for Piano and Orchestra by Richard Yardumian. This American International Music Fund live recording, digitized by the Fleisher Collection, is from the stage of the Academy of Music in Philadelphia, January 4th, 1958. Rudolf Firkušný is the pianist, and Eugene Ormandy conducts the Philadelphia Orchestra.

[Richard Yardumian. Passacaglia, Recitatives and Fugue for Piano and Orchestra]

Music of Richard Yardumian on Fleisher Discoveries, his Passacaglia, Recitatives and Fugue for Piano and Orchestra. Rudolf Firkušný was the piano soloist, and the Philadelphia Orchestra was conducted by Eugene Ormandy. This was another discovery, on Fleisher Discoveries, from the archives of the American International Music Fund, the great project under the auspices of the Koussevitzky Foundation to record significant performances of contemporary orchestral music in the United States. The Fleisher Collection was one of the repositories of these hundreds of reel to reel tapes, and Fleisher curator Gary Galván has embarked on the tremendous project of digitizing all of these. I’m Kile Smith, and this is Fleisher Discoveries.

Richard Yardumian married Ruth Seckelman who, it turns out, was an assistant to Leopold Stokowski in the late 1930s, during that transition in the Philadelphia Orchestra from Stokowski to Ormandy. Stokowski encouraged Yardumian’s composing, and that connection grew into a relationship with Ormandy. Yardumian wrote Desolate City before he went off to World War II and when he came back, Ormandy premiered it with the Philadelphia Orchestra in 1945. Yardumian would enjoy a long term with Ormandy and the orchestra as composer laureate, 1949 to 1964. They premiered ten of his works and made four recordings for Columbia over those years.

Now what was that Fleisher full-circle connection I mentioned earlier? Well, I noted that apart from his brother Elijah’s tutelage, Richard would have no formal training until he was 21. He studied counterpoint with the great organist H. Alexander Matthews, piano with the Australian American George Frederick Boyle, who was Elijah’s teacher at Curtis, and for harmony he went to William Happich. Happich was, as the most astute of our listeners will know, the very first curator of the Fleisher Collection, hired by Edwin Fleisher before the collection moved from its Pine Street headquarters to the new Free Library of Philadelphia building in 1929. Little did I know, standing in that Bryn Athyn driveway at Richard Yardumian’s house, that perfect house for a composer, that I was, in a sense, carrying on a project my predecessor curator had helped to start, what was it, 60 years earlier.

The Fleisher Collection is on Facebook, and I’m on Facebook, on Twitter @KileSmithMusic, and kilesmithmusic on Instagram, and my email is kile@kilesmith.com. Let me know how you liked this installment of Fleisher Discoveries. Donald in Bethlehem, Pennsylvania called last month’s show on George Rochberg “brilliant,” and I thank you, Donald, it was a fascinating podcast to put together.