Blackwood thought to himself, “‘Uh-oh… he’s right! That is exactly the process I use.’ I never wrote another piece like that again. If someone can spot that just listening to it, then it’s too obvious.” 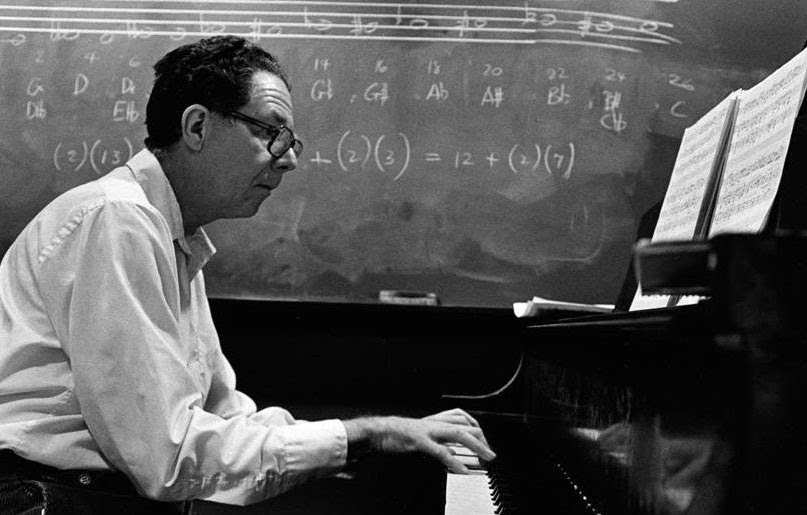 Today we have the live premiere performance of the first symphony of Easley Blackwood, the first of five he composed. He’s also a concert pianist who’s performed and recorded contemporary and standard solo piano and chamber works throughout his career. Blackwood was professor of music at the University of Chicago from 1957 to 1998, forty years, and he wrote about music, specifically about microtonal music. This early first symphony, Opus 3, in fact, isn’t microtonal, but is a clear example of his vigorous approach to music. It’s also a window through which we can view one of the paths American classical music took in the middle of the last century.

Just as an aside, microtonal music refers to a way of looking at the musical scale, a way we usually don’t look at it. On any piano you’ll see that the octave divides into 12 notes, so if you start at, say, middle C and plunk your finger on each black and white piano key going up, you’ll have hit 12 keys when you get to the next C, an octave above. It’s confusing because “octave” means eight notes, but that just counts the usual major or minor scales or modes. The 12 notes count every note—whether they’re in the scale or not.

So, imagine splitting that octave not into 12 notes, but into 15 or 17 or 22 or 36 or even more. It starts to make you dizzy but people have written music along these lines, and have built instruments, even pianos, to play it. Or they’ve written electronic or computer music for it. Easley Blackwood wrote microtonal music later on, well after his Symphony No. 1, and especially wondered how traditional harmony could fit into it, in other words, if it were possible to utilize and recognize traditional chords like dominants and subdominants in it. He succeeded, and wrote a book about it.

Here’s the beginning of an Andantino for synthesizer Blackwood composed for a 16-note scale.

I’m taking this side-trip into microtonality because I think it throws a light onto all of the music of Easley Blackwood, that is, how he approached composing music. He studied with Olivier Messiaen, Paul Hindemith, and Nadia Boulanger, a fascinating combination of French and German, but what they have in common, I think, is theoretical rigor driving a desire to communicate.

Bruce Duffie, in his ever-important series of composer interviews, talked to Easley Blackwood in 1993. Duffie asked him what the purpose of music was, and Blackwood responded, “to entertain and please. Nothing more, nothing less. It provides high class entertainment to a relatively small audience of people who are tuned into it.”

He went on to clarify that to entertain doesn’t mean that it’s always fun or light—far from it—but that it diverts our attention. It isn’t political, and to try to invest it with a deeper meaning is doomed to fail. You can set political words, of course, religious or any other kind of words, but to make those or any other philosophical meanings out of music is a mistake. If it doesn’t at first entertain us in the broadest sense, it has failed as music.

He felt that this is as true in Schubert and Schoenberg as in his own music, be it microtonal, tonal, atonal or what have you. Much of his music before his microtonal compositions he called “atonal polyrhythmic,” and he said that that was what the majority of American classical composers were writing in the ’40s and ’50s. It’s music that emphasizes extremes of emotion through wide leaps and a constant shifting of all the facets of music. Harmonies, dynamics, textures are all in a constant state of upheaval.

It isn’t necessarily 12-tone music, strictly speaking, and Blackwood said that total serialism never interested him. But atonal polyrhythm owes much of its worldview to expressionism, the Wozzeck and Lulu operas of Berg, for instance, where a heightened state of emotion is paramount. It’s as if the cohesiveness of tonality has been exchanged for the certainty of emotional upheaval. What is certain is uncertainty.

He’s glad we have it, but it was a dead-end, according to Blackwood. His rejection of this musical worldview isn’t exactly the same as George Rochberg’s, which we saw two months ago in Discoveries, which was more of a theoretical argument against twelve-tonism. But they end up with similar objections, that constant upheaval in music leaves you, ultimately, with no upheaval, with no differentiation among emotions, or with only a limited palette of emotions. What brought George Rochberg to his moment of decision was realizing he could not properly mourn the death of his son in 12-tone music. What changed Easley Blackwood was a comment from a friend after he listened to a work of his. This is also from the Bruce Duffie interview.

His friend told him, “[Y]ou choose every note in that piece in such a way to produce the maximum possible surprise.” Blackwood thought to himself, “‘Uh-oh… he’s right! That is exactly the process I use.’ I never wrote another piece like that again. If someone can spot that just listening to it, then it’s too obvious.”

From the archives of the American International Music Fund, we’ll go back before what Blackwood called “atonal polyrhythm” to his Symphony No. 1. There are nascent elements of that here, but it has an underpinning of tonality, and its rhythmic excitements, as indeed its other musical elements, are in the tradition as brought forward by Paul Hindemith, and Dmitri Shostakovich, and even, to my ears at least, some Claude Debussy.

It’s in four movements, a sit-up-and-take notice Andante maestoso, a lyrical but still tense Andante comodo, an ironic, waltzing, fuguing scherzo, and a final andante that ends quietly. There’s a recording of this still available that Charles Munch made with the Boston Symphony Orchestra in 1958, but we are going to hear now the actual live premiere performance from that same season, conducted by Boston’s associate conductor and concertmaster, Richard Burgin.

On Fleisher Discoveries then, the Symphony No. 1 of Easley Blackwood.

The world premiere of the Symphony No. 1 of American composer Easley Blackwood. The Boston Symphony Orchestra was conducted in this 1958 concert by its associate conductor and concertmaster Richard Burgin. This is Fleisher Discoveries and I’m Kile Smith.

This recording of the Easley Blackwood Symphony No. 1 was made possible by the American International Music Fund, and digitized by the Fleisher Collection of Orchestral Music under curator Gary Galván. We’re so glad we’re able to bring these to you.

A few months ago we heard music by Cuban American composer Aurelio de la Vega on Fleisher Discoveries, and I’m sad to report that de la Vega died just two weeks ago, on February 12th. He was 96 years old. It was such a joy getting to know him and his life, and I was fortunate to have been able to correspond with him a few times since our podcast. I’d like to read just a bit of the obituary from the Los Angeles Times:

De la Vega taught composition for thirty-four years at California State University, Northridge as Distinguished Professor of Music and Director of the Electronic Music Studio. … At a time when U.S. Latino composers were a rarity, de la Vega was a notable pioneer. He first visited Los Angeles in 1947. … Still a diehard atonalist, de la Vega eventually sought alternate training at UCLA with Ernst Toch. He returned to Havana to contexts that often regarded his works as too avant-garde…. Despite such odds, he became, during the nineteen fifties, a stable international referent to the Cuban musical scene through his frequent premieres … as music critic for two major Havana dailies … as member of the National Culture Institute; and … as founding Dean of the University of Oriente School of Music.

In 1959, [he] moved permanently to Los Angeles. The fall of the … Batista dictatorship had caught him in the middle of a U.S. lecture tour, after which he returned to Havana. But after a brief stay, the hostile context he found persuaded him to emigrate. In the U.S., once he had become a citizen, de la Vega became a vocal critic of the Castro regime, particularly its dismal record of human rights abuses and persecution of dissident artists and intellectuals, all of which had contributed to the destruction of a free Cuban culture. In reaction, de la Vega saw his ever-growing catalog and world-wide acclaim banned consistently in Cuba from all mention and performance, including air waves. Only in 2009, half a century after going into exile … was Intrata … performed publicly in Havana by the Cuban National Orchestra.

He asserted once: “I have always been intent on creating a self-sufficient music, the type of art that would be important enough to gift to your place of birth, to the culture where you grew up… My work is shaped like an arc with trunks, roots and leaves that will sprout in the future once I’m gone. The truth will be out then: I won’t be there, but my work will be.”

That’s from the Los Angeles Times obituary. Our condolences to Aurelio de la Vega’s widow Anne-Marie, and to his many friends and students, whom he affected deeply with his wisdom, humor, and love.

The Fleisher Collection is on Facebook, and I’m on Facebook, on Twitter @KileSmithMusic, and kilesmithmusic on Instagram, and my email is kile@kilesmith.com. Let me know how you liked this installment of Fleisher Discoveries. Andrew in Florida emailed me with a big “Wow” and to say that he had never heard of Richard Yardumian before last month’s show, and also two of Yardumian’s children wrote in with their appreciation.

That Yardumian episode is still up on Fleisher Discoveries, and so are all of our podcasts, so listen in at any time! I do appreciate that you take the time to give us a listen, and I so much enjoyed bringing the Easley Blackwood  Symphony No. 1 to you this month. Stay tuned for more Fleisher Discoveries podcasts coming to you every month, right here.