This was the last completely original piece of music he would ever write. He was 31 years old and he told people that he was Icarus. 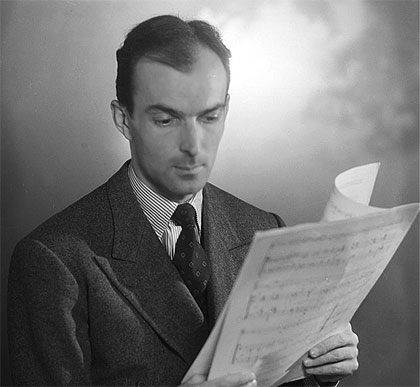 On this month’s Discoveries we’ll hear what’s considered the greatest work by a certain Ukrainian composer, a composer who effectively gave up composing before he turned 30 to become one of the most highly regarded conductors of the 20th century: Igor Markevitch.

Markevitch was born in the city of Kyiv, now the capital of Ukraine and right now—as I speak—in the middle of a fight for its life, undergoing bombing by Russian forces that have been stalled by the surprisingly resilient Ukrainian counterattack. In 1912, when Markevitch was born, Ukraine was part of Czarist Russia. It would soon be swept into the new Soviet Union after the 1917 Revolution, but in 1914, the same year the First World War started, the Markevitch family with two-year-old Igor left for Paris. Two years later they moved again, to Switzerland, and that’s where Igor Markevitch grew up.

It probably was a good thing the Markevitch family left Ukraine and Imperial Russia, since, as a family of nobility, there’s a chance they would have been marked for elimination in the Russian Revolution. Igor’s great-grandfather worked in the administration of Alexander II, who helped modernize Russia by bringing some liberation to the serfs. He’s also the one who sold Alaska to the United States, just after our own Civil War, to keep it out of British control.

But the Markevitches left all that behind. Boris, the father of Igor, was a pianist, so the move to Paris made sense for artistic and career reasons, but he was in poor health and died in Switzerland of tuberculosis. Igor, a talented pianist, came to the attention of one of the greatest pianists of the 20th century, Alfred Cortot. Igor went back to Paris to study piano with him and composition with Nadia Boulanger. It was 1926 and he was 14.

The bigger-than-life Russian impresario Serge Diaghilev soon found out about Igor Markevitch, produced a piano concert for the 16-year-old, paid him to write a piano concerto, and wanted him to compose music for his Ballets Russe, as he had done for that other Igor—Stravinsky—and for so many other composers. That ballet was not to be, since within a year Diaghilev would be dead.

But the young Markevitch’s career took off, which had both good and bad consequences. His name soon became known throughout the world of European music and more than that, he became admired by established composers such as Béla Bartók, Benjamin Britten, Darius Milhaud, Igor Stravinsky. But the super-hyping by Diaghilev of Markevitch as “the second Igor” also stuck in the craws of many, especially Stravinsky’s, and so the grumblings of envy dogged Markevitch for years.

He produced major works every year, and in 1932 and ’33, the same years Joseph Stalin was mechanizing his brutal bureaucracy to starve millions of Ukrainians, Markevitch composed a ballet on the story of Icarus, who flew too close to the sun and perished. L’envoi d’Icare or The Flight of Icarus was to have been a ballet for Serge Lifar, a dancer and choreographer for Diaghilev, but when Lifar saw Markevitch’s score, he must’ve dropped it like a hot potato. 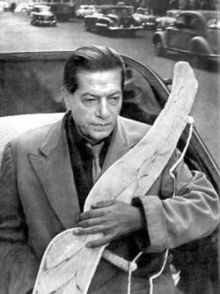 If Stravinsky’s Rite of Spring was wild, Icarus was wilder. Its rhythms were not only jagged, they were independent of each other. Harmonies pushed chromaticism to the extreme and even beyond normal tonality, into quarter tones, where entire sections of the orchestra retuned their instruments. Serge Lifar, like Markevitch a Ukrainian born in Kyiv, would have nothing to do with his countryman’s score and choreographed the ballet without any involvement from Markevitch.

Lifar ended up collaborating with the Nazis in Paris, running the Paris Opera Ballet during the Second World War. After the war the workers would have nothing to do with him, although he did take the company on tour. He finally was forced into retirement in the 1950s, and there is this haunting photograph of him leaving the hall for the last time, taking with him one souvenir, the wings he wore as Icarus.

Igor Markevitch meanwhile, back in the ’30s with his Icarus rebuffed by Lifar, re-arranged it for pianos and percussion, and in 1943, after severe illness and abandoning composition altogether, rewrote the entire piece for orchestra. He simplified some of the rhythms, removed all the quarter tones, and the ballet The Flight of Icarus became simply Icarus or in French, Icare. This was the last completely original piece of music he would ever write. He was 31 years old and he told people that he was Icarus.

We’ll discover what he did next but let’s hear Icare now. From the archives of the American International Music Fund and digitized by the Edwin A. Fleisher Collection of Orchestral Music under curator Gary Galván, the first broadcast performance in America of Icarus by Igor Markevitch.

This is from a live concert by the New York Philharmonic, conducted by Leonard Bernstein 64 years ago almost to the day, in April of 1958. Icare by Igor Markevitch.

And the death of Icarus ends what many call the greatest work by the Ukrainian composer Igor Markevitch, Icare. The New York Philharmonic was conducted by Leonard Bernstein.

Markevitch hailed from Kyiv, the capital of Ukraine, and Bernstein’s parents in fact came from Rivne in western Ukraine. Icare by Igor Markevitch, in this April 1958 concert by the New York Philharmonic in the archives of the American International Music Fund and digitized by the Fleisher Collection at the Free Library of Philadelphia under curator Gary Galván. I’m Kile Smith.

While Igor Markevitch was giving up composing, he took up conducting. He studied it with Pierre Monteux and with Hermann Scherchen. And he really did, after Icarus, give up composing. He arranged some other composers’ music, including Bach, but for more than a quarter of a century after ceasing to compose, his music dropped into oblivion. He didn’t conduct it, and hardly did anyone else, with the rare exception of such which we have just heard. But in the 1970s he began to conduct his works, and the music of Igor Markevitch enjoys a small but passionate number of devotees, who recognize his brilliance and distinctive voice.

He did become a universally recognized great conductor, and perhaps one of the greatest never to hold a really major post. His fame came from a series of smaller orchestras and an active guest-conducting schedule. He lived in Switzerland, traveled widely, and died, 70 years old, in 1983. His final concert was in the city that witnessed his birth, the capital of Ukraine, Kyiv.

And our thoughts are with Kyiv and all of Ukraine right now.

The Fleisher Collection is on Facebook, and I’m on Facebook, on Twitter @KileSmithMusic, and kilesmithmusic on Instagram, and my email is kile@kilesmith.com. Let me know how you liked this installment of Fleisher Discoveries. Richard Yardumian’s daughter Miryam emailed me with thanks for the wonderful memories brought up by our February podcast.

All of our podcasts are available all of the time, so check us out anytime for all the many of what we hope are interesting stories we have for you. Stay tuned for more Fleisher Discoveries podcasts coming to you every month, right here.