Where the Mind Is Without Fear

Ever since singing Paul Creston’s Three Chorales from Tagore in high school, I’ve wondered if I’d one day have the chance to grapple with the work of that wondrous poet, writer, and artist Rabindranath Tagore. I’m happy to have that opportunity now, because of David Edmonds and the University of New Mexico Chorale.

Tagore’s powerful repetition of “Where” led me to a more textural setting than I otherwise might have composed for this invigorating poem. “Where” performs two duties simultaneously: It not only hammers down the start of the line, it lifts the entire poem into the air. You feel the freeing, striving, stretching, ever-widening forces he calls on, from that one word “Where.”

But repeating “Where,” as I have done at the start of this setting and elsewhere, adds another dimension. By itself, it is a designation—this is where—but intoning it over and over for two pages turns it into a question—where is this?—answered finally by “Into that heaven of freedom.”

The music is available in E lydian (as sung in the premiere) or a half-step higher in F lydian. In my notes on Ave Maris Stella I called the Lydian mode, with its major-key-and-raised-fourth profile, “bittersweet and ineffable.” But here it seems exhilarating and poignant. It’s probably unwarranted to define any mode like this, since any descriptor invokes a thousand exceptions, but centuries of Western music’s almost exclusive reliance on major and minor unveils to our ears a “this-but-also-that” dichotomy within all the other modes—especially, to me, with the Lydian.

Adding to the textural palette is the sound of the long “a” in “Where” and, in the traditional pronunciation of “wh,” that first puff of air. Divisis—always a temptation in sound-sculpturing—are kept to a minimum. That and a propulsive rhythm helped to keep this not only lean, but within the four-to-five-minute range we wished to have for this.

Where the mind is without fear and the head is held high;
Where knowledge is free;
Where the world has not been broken up into fragments by narrow domestic walls;
Where words come out from the depth of truth;
Where tireless striving stretches its arms towards perfection;
Where the clear stream of reason has not lost its way into the dreary desert sand of dead habit;
Where the mind is led forward by thee into ever-widening thought and action ⎯
Into that heaven of freedom, my Father, let my country awake. 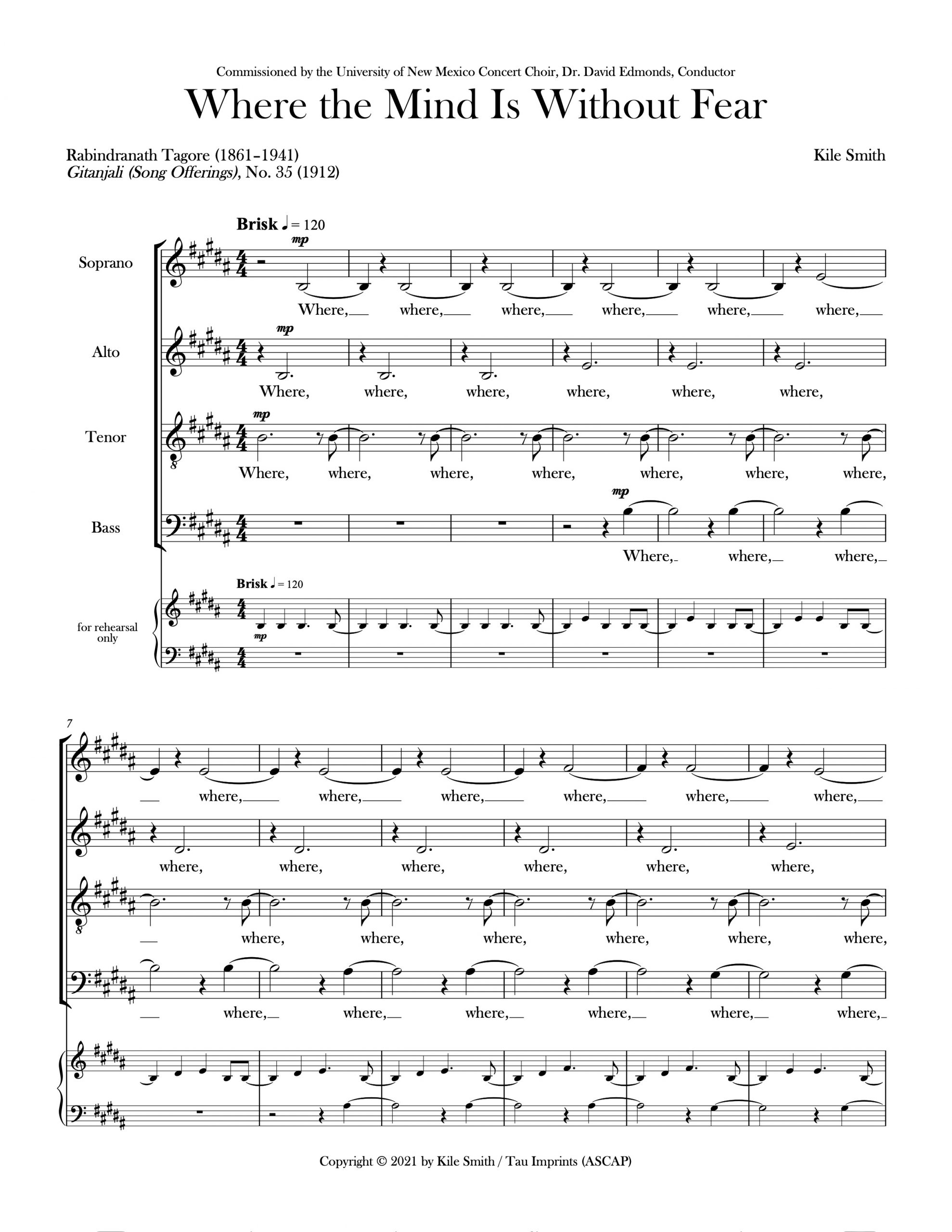