With $500 from his father for school, the 18-year-old ran away from home, leaving Europe on a ship to the US, and ending up in Galveston, Texas. He knew six languages, but not one of them was English. 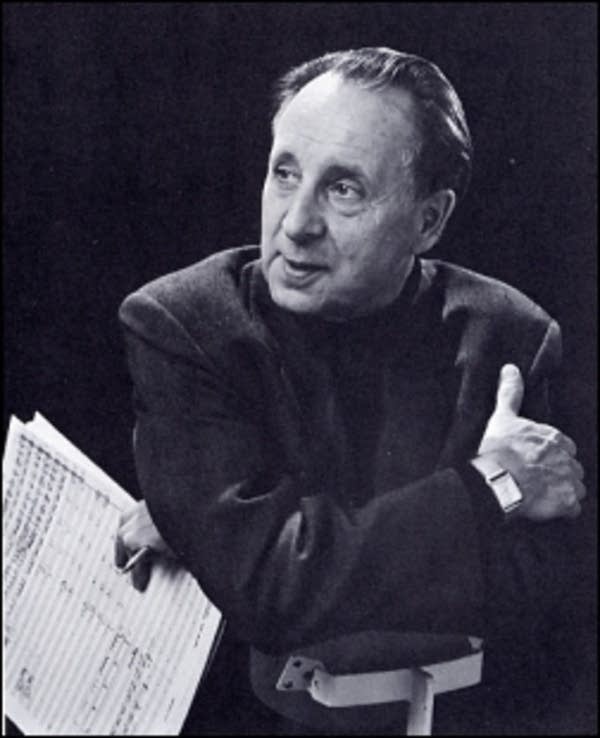 “People don’t start playing ball at your age, they retire!” That’s what Pop Fisher, manager of the fictional New York Knights, says to late-thirties Roy Hobbs, who just wants to play baseball in The Natural. It’s baseball season now and I thought of that scene in the Knights dugout while I was preparing for this Fleisher Discoveries on Gene Gutchë.

In 1942 Gutchë was 35 years old. He had been in New York City, married, and as a multilingual tour guide trying to put away enough money to study music. But when America entered World War II in 1941, business, already iffy, dried up. So he and his wife Marion moved back to Minnesota. He finally got his Masters in music in 1950, and then from the University of Iowa, his Ph.D. in composition, in 1953. At that point, ready to start on his composing career, he was already 46 years old.

It isn’t as if he wasn’t busy. Gene Gutchë was always getting things done. And he was always, always independent. In 1907 he was born Romeo Maximilian Eugene Ludwig Gutschë in Berlin, his last name spelled g-u-t-s-c-h-e with the two dots over the e. His father’s family was Alsatian, so the name was French, Guoché, spelled g-u-o-c-h-e accent aigu. His grandfather had changed the spelling to make it more pronounceable for Germans in the move to Berlin, and when Gene Gutchë came to the United States, he changed the spelling again, dropping the s but keeping the t, so it became g-u-t-c-h-and e with the two dots.

But his arrival in America wouldn’t happen for some time. His father was a fruit merchant and Gene was raised in comfortable circumstances. He loved music from early on, played the piano, and could memorize entire pieces almost at sight. He met Toscanini, Busoni, and attended every concert he could. The family moved to Switzerland during World War I. A precocious student, he studied business administration in Lausanne, and took doctorates in economics in Italy and political science in Germany, all of this before he was 18.

His father, however, would not allow him to study his true love, music, so with $500 from his father for school, 18-year-old Gene Gutchë basically ran away from home, leaving Europe on a ship to the US, and ending up in Galveston, Texas. He knew six languages, but not one of them was English.

After spending all his money he found a job as a migrant farm worker, following the team north to Minnesota, to St. Paul, where an uncle of his was a priest. When he got there, the priest had been reassigned to Canada, but Gutchë stayed, worked, began to study music, and met Marion Buchan, whom he married in 1935.

That is when they moved to New York, but with the new war and uncertain prospects, they returned to Minnesota. Marion insisted that he go totally into music, whatever the cost, and that she would continue to work at whatever job she could. Fortunately, she became a secretary to a Dr. Frederic Foley, who knew that Marion’s husband was going to classes by day and working as a night watchman by night. Foley was not only wealthy from being the inventor of a catheter, but he was generous. He admired Gutchë’s hard work and talked to a friend of his, who happened to be president of the Minneapolis Symphony. The two businessmen paid for Gene Gutchë’s master’s degree.

And Gutchë began composing up a storm. So even though he had a late start, he made up for it by being prolific, and by writing fast. He wrote a half-dozen concertos, a half-dozen or so string quartets, a few vocal and choral works, but the bulk of his output has been symphonic, with more than two dozen orchestral works in his catalog and in the catalog of the Fleisher Collection. Included among those are six symphonies, the last of which we’ll hear today.

He’s received a number of prizes, grants from the Ford Foundation, two Guggenheim Fellowships, four from the National Endowment for the Arts, and commissions from the Detroit, Cincinnati, and National symphonies among many others. He was never in academia but immersed himself in many of the trends in classical music composition, taking what he liked and leaving the rest.

He said to Bruce Duffie in a 1986 interview that he hated Schoenberg’s music at first. Marion told him to keep at it, though, reminding him that he hated tomatoes when he bit into his first one, but kept eating another and another until he got used to them. Gutchë’s music uses atonality but wears it lightly. He used microtonality when that was all the rage for a time, abandoned it, but learned to keep an open mind, always looking for music that would be a mirror to the audience of their time. “Music today has to have the quality of intensity,” he once said. “Today people think in swift and tense ways.”

His last symphony, Symphony VI, is an excellent place to hear his intensity, clarity, open-mindedness, and humor. I call it “Symphony Six” and not Symphony No. 6 only because that’s how he calls it, the work Symphony followed by VI, the Roman numeral for 6. It’s in four movements and they follow the path you might expect of a symphony, with brash and profound followed by lyrical and subdued, then a scherzo, then a big finale. But he does it in an unusual way.

The first movement he calls a “Prologue of Fanfares,” and is just for brass—actually, for brass, timpani, and cymbals. The second movement is for strings, celesta, and harp; the third, the scherzo, is for woodwinds and xylophone; and only in the fourth movement does the entire orchestra play together. So it’s a kind of concerto for orchestra, and it’s a love letter to the Detroit Symphony Orchestra, who commissioned it in 1969 under their music director Sixten Ehrling. They premiered it in 1970.

Again from the archives of the American International Music Fund, a live recording digitized by the Fleisher Collection under curator Gary Galván, the world premiere of Symphony VI by Gene Gutchë. Sixten Ehrling conducts the Detroit Symphony Orchestra.

Symphony VI, the last symphony of Gene Gutchë. The Detroit Symphony Orchestra was conducted by Sixten Ehrling, who commissioned this. This recording was made possible by the American International Music Fund, and it has been digitized by the Fleisher Collection of Orchestral Music at the Free Library of Philadelphia under curator Gary Galván. Symphony VI by Gene Gutchë. This is Fleisher Discoveries, and I’m Kile Smith.

Even though I never met either Gene or Marion Gutchë, I was so happy to have gotten to know them through phone calls and letters during my time as Assistant Curator and then Curator of the Fleisher Collection. The Collection has all of the orchestral works of Gene Gutchë on its shelves, and I know we also printed up string quartets for him as well. We worked with him throughout his career. They were both lovely to talk to, and Gene was never very far away from a laugh, often at his own expense. Even though you can tell from the music we just heard that his work can be rambunctious and gnarly at times, it is the energy of real life that pulsates through his music. He was like that; he wanted to reach people; he was like that in real life; he was like that in his music.

Gene and Marion Gutchë left a substantial bequest to the Fleisher Collection on their passing, on the sale of their house on White Bear Lake, Minnesota, and also to the Schubert Club in St. Paul, which houses Gutchë’s chamber and other music, and papers.

The Fleisher Collection is on Facebook, and I’m on Facebook, on Twitter @KileSmithMusic, and kilesmithmusic on Instagram, and my email is kile@kilesmith.com. Let me know how you liked this installment of Fleisher Discoveries. Allan in Illinois wrote in after last month’s Igor Markevitch podcast to thank us for the excellent shows and write-ups, and you are welcome, Allan! Happy to do it and to learn so much and to enjoy it along with you!

The Markevitch and all of our podcasts are available all of the time, so check us out anytime for all the many of what we hope are interesting stories we have for you. Stay tuned for more Fleisher Discoveries podcasts coming to you every month, right here.