Fleisher Discoveries: A Memorial from, and for, Nicolai Berezowsky

He threw spitballs at Rasputin. He escaped the Soviets. He wrote concertos and symphonies for the biggest names. For a time he was bigger, some said, than Copland. But it didn’t last. 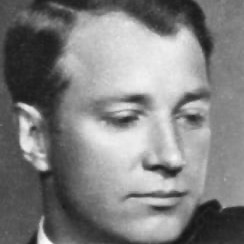 Last month we revisited Aaron Copland and his unusual first symphony for organ and orchestra. This month’s show is on a composer who was born in the same year as Copland, 1900, and who was said to be for a time even more popular than Copland. That composer is Nicolai Berezowsky.

If you’ve never heard of Berezowsky, we won’t hold it against you, because after his death in 1953 his works have been almost completely forgotten. We may be able to posit a few reasons for that as we go along, but whether we’re right about them or not, he was a man of real talent, as we’ll be able to hear in his fourth and final symphony later on in the show.

He’s an American composer, but he was born in Russia, in St. Petersburg, and since it was in 1900, that would be in Tsarist Russia. In fact, he was a choirboy in the Imperial Chapel in St. Petersburg, singing for the Tsar and his family, and for Rasputin. Berezowsky’s first wife, pianist Alice Newman, wrote in her book Duet with Nicky that he told her he and other boys would tear paper out of hymnals and shoot spitballs at Rasputin from the choir loft. Apparently he got away with that, and he went on to become a busy violinist in orchestras by his late teens, including, by 1919, the Bolshoi Theatre in Moscow.

But by this time, of course, the Russian Revolution had taken place, and Berezowsky determined to escape the country. He got as far as Poland but was caught, arrested, and jailed. His fate could have been catastrophic but a music-loving official realized who he was and let him go. Somehow Berezowsky obtained an American visa and came to the States, arriving in New York City in 1922.

Immediately he was a working violinist, and within a year Nicolai Berezowsky was playing in the New York Philharmonic. He studied violin and composition at Juilliard, the latter with Rubin Goldmark, one-time teacher of Aaron Copland. US citizenship followed in 1928, and while he left the Philharmonic in 1929 as his composition activity grew, he continued playing, partly, he said, to send money back to his father in the Soviet Union.

In the mid-30s he became the founding second violinist of the Coolidge String Quartet at the Library of Congress. He performed with them for a few years, but his compositions were bringing him more and more into the spotlight. Willem Mengelberg had conducted his Hebrew Suite with the Philharmonic in 1928, and then there was a Violin Concerto for Carl Flesch in Germany, a Viola Concerto for William Primrose, and a Cello Concerto for Gregor Piatigorsky—that work performed with the Boston Symphony Orchestra and Serge Koussevitzky.

Koussevitzky became a champion, commissioning five works by Berezowsky, including the Fourth Symphony, which we are about to hear, a memorial to Koussevitzky’s first wife Natalya Constantinovna Koussevitzky.

The symphony is in four movements, generally slow, fast, slow, and fast, and see what you think of how he handles the emotional range of the music throughout. It intrigues me. It’s a memorial to Koussevitzky’s recently deceased wife but there’s a lightness that shines through, from the sometimes halting, sometimes sinuous writing of the first movement all the way to the optimistic, almost boisterous ending.

Commissioned by the Koussevitzky Music Foundation for $1,000 in 1942, the Symphony No. 4 of Nicolai Berezowsky on Fleisher Discoveries. This live recording is from the American International Music Fund and digitized by the Fleisher Collection under curator Gary Galván. It’s from the 1958 season of the Kansas City Philharmonic Orchestra, conducted by their music director Hans Schwieger. The Fourth Symphony of Nicolai Berezowsky.

And a rousing finish to the Symphony No. 4 of Nicolai Berezowsky, the Kansas City Philharmonic Orchestra conducted by Hans Schwieger, in this live performance from Kansas City’s 1958/59 season. The work was commissioned by Serge Koussevitzky in 1942 to honor his wife who had just died that year. This recording is from the archives of the American International Music Fund, digitized by the Fleisher Collection under curator Gary Galván, and brought to you now on Fleisher Discoveries. I’m Kile Smith.

That Berezowsky was having a successful composing career is apparent, but it was not without its cloudy skies. For instance, Koussevitzky, although certainly a fan of Berezowsky, did not conduct the premiere with Boston. The composer himself conducted. Whether Koussevitzky felt uneasy about conducting a work that, after all, memorialized his recently dead wife, or whether he had misgivings about the piece itself when it was finished, we don’t know. Berezowsky did ask Koussevitzky repeatedly to conduct it, but it never happened. In a letter he pleaded, “Who is going to play the symphony if you yourself won’t perform it?”

It seems to me that Berezowsky was most comfortable in this symphony in the second and fourth movements, the faster, lighter sections, especially that Vivace second movement. And his most successful piece, his last, the children’s opera Babar the Elephant, shares a lot of that genius for light music, as does his 1943 Christmas Festival Overture, which uses Ukrainian children’s carols. So maybe he felt a tension in his artistic expression between the serious output of his concertos and symphonies and the lighter side of his writing—just speculation on my part.

And while Berezowsky was certainly busy writing up to the end of his life, those earlier concerto successes tailed off, and by 1953 he was not nearly in the top tier of names such as, well, Aaron Copland. If that affected him it would be a shame because if Berezowsky had lived past 1953 he may have been buoyed by Babar’s success. But we’ll never know. On August 27th, 1953, he took a load of sleeping pills and with them, his own life. Rest in Peace, Nicolai Berezowsky.

Bill in Pennsylvania wrote in to say, “I always enjoy your lucid and informative discussion of the selections to be aired from the Fleisher Collection,” and I thank you for that, Bill. And Reinhold wrote in from Germany after he caught up with our podcast on Janáček from 2020. He’s mad about Janáček and could tell that we were, too, and we are, so it’s great to make contact with you, Reinhold!

All of our podcasts are available all of the time, so check us out anytime for what we hope are the interesting stories we have for you. Stay tuned for more Fleisher Discoveries podcasts coming to you every month, right here.