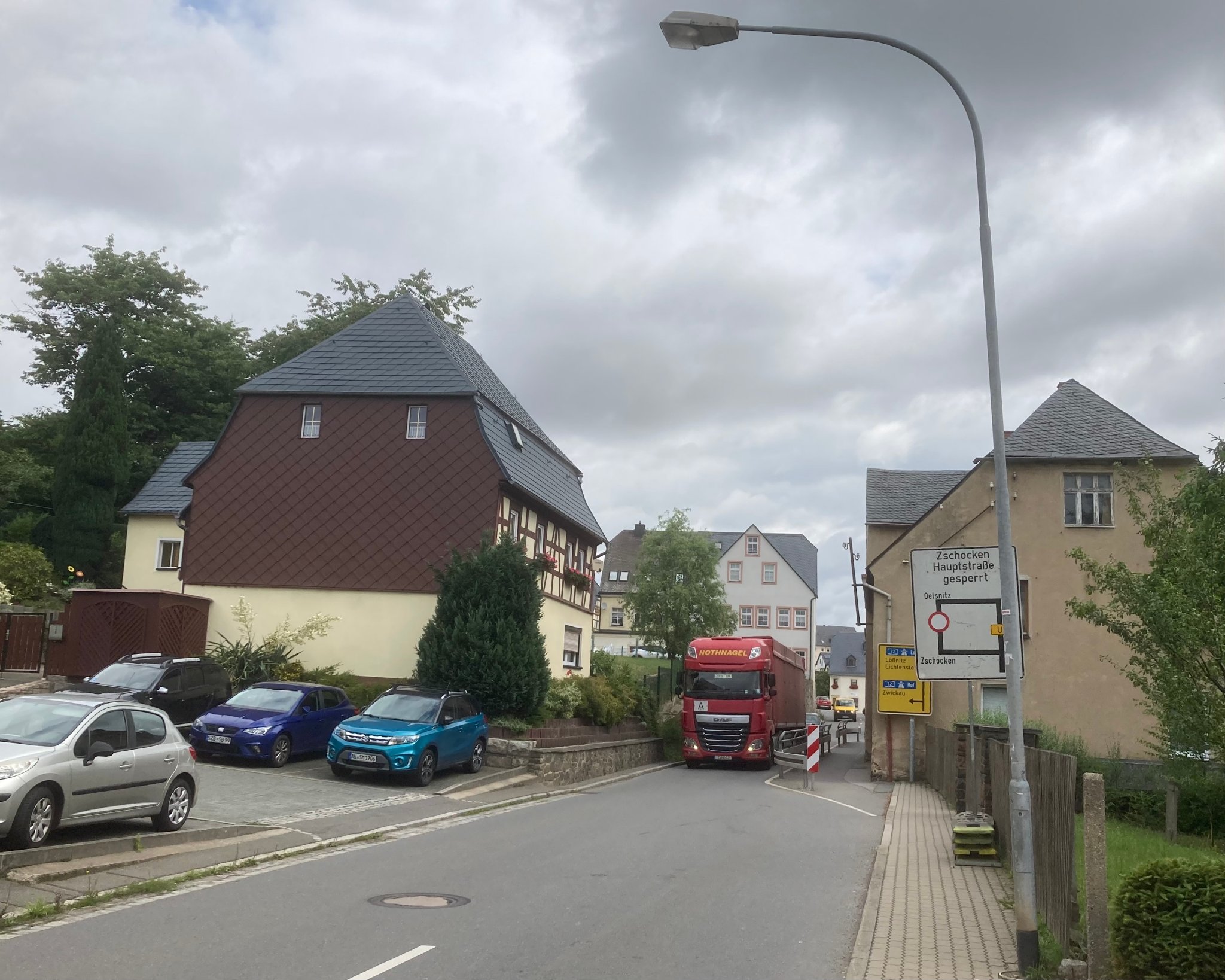 I hope I am not given to sweeping statements, but traveling has enlightened me to genuine differences between America and Germany. This photo highlights one.

America expects drivers to be inattentive, and installs signs everywhere, which are ignored. Germany trusts drivers to be alert, and they are. Both countries, for instance, have a law requiring drivers to Keep Right Except To Pass. We have signs about this on every highway; the signs are ignored. I have never seen a sign for this in Germany, but everyone obeys it. (In five trips, I think it is, to Germany I have never even seen a police car on any Autobahn, and yet everyone obeys this rule, and many others.)

For another example, in this photo from the middle of Hartenstein, again in the Erzgebirge section of Saxony, there is this bottleneck from two lanes to one. We ran across a few of these, just as you might on the rare country road here sporting a one-lane bridge. There is no warning for this. There is no sign, written or drawn, no light, blinking or unblinking, no automatic arm. The road has not been widened. What happens is, you drive and you see that your lane is ending. A guardrail (unusual enough over there, but there’s a house there after all) wraps in front of you; at the point of impact there is but a 3-foot-high rectangle with diagonal red & white stripes. What do you do? You do what a normal person would do. If the way is clear, you swerve into the other lane and drive through. If traffic is approaching, you stop, you wait, and when the road clears you continue. On our US country roads this particular instance is, I admit, similar, but still, there are more signs & warnings.

This trust of the driver is everywhere. Many roads are narrow. Many houses on these narrow roads have cars parked in front of them, since they like to reserve land for fields & forests, and tend to snuggle houses close to each other, especially in villages, which have no expansive driveways, if any. Cars are parked half in the street and half on the sidewalk, which always has (they thought of this) a low curb or even just a boundary that’s level with the road. There are no-parking areas, of course, but narrow streets often have parked cars halfway in them. There is barely room for two lanes of traffic as it is (which often includes big trucks as in the photo), so what do you do when there’s a car parked? You do what a normal person does. If there’s room, you go around. If there isn’t, you wait.

Accidents hardly ever happen on the Autobahn, they say, but when they do, they’re doozies. That must be true but I have never seen one. I have never seen one on a small road, not even a fender-bender. Maybe they clean them up quickly but in any case I like being trusted to act like a normal person. I confess, it encourages me to act as if I am trustworthy.