She founded a pioneering group for women composers and a successful independent record label. She taught in Tennessee, Hawaii, Jakarta, and Vienna. But what made Nancy Van de Vate happiest was composing—for orchestra. 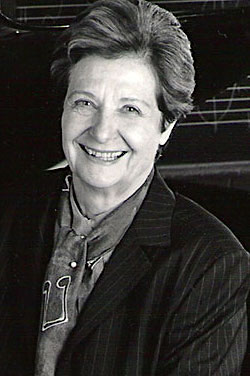 And then there was Indonesia, where she lived for four years, and of course, Vienna, living there for decades and becoming an Austrian citizen, holding dual Austrian and American citizenship.

I mention all these places because they’re behind the work of Nancy Van de Vate we’ll hear today, Distant Worlds, for solo violin and orchestra. The title makes it sound as if it’s about other planets but Van de Vate says it was inspired by all the places she’s lived. She wrote most of Distant Worlds in Jakarta, completing it in Czechoslovakia in 1985, just before recording it in Poland.

But as it happens, most of her works were recorded because she founded a record company, Vienna Modern Masters, with her husband Clyde Smith. They released dozens if not hundreds of contemporary music CDs, by composers from around the world. Much of her music, and that of many of their composers, garnered wide airplay in Europe and the United States on classical music stations.

In addition to her work for other composers through her record company, Van de Vate felt keenly the great imbalance in composing opportunities weighing against women composers, and decided to do something about it. In 1975 she founded and led the League of Women Composers, a trailblazing organization devoted to advocating for the inclusion of music by women composers in every aspect of the classical music world. Twenty years later it merged with two other organizations to become what is now the International Alliance for Women in Music.

The Fleisher Collection has worked with these organizations over the years to get the word—and the music—out, to promote the works of women composers as much as possible. On Fleisher Discoveries, in all our 21 years, we’ve aired works by Nancy Van de Vate and other contemporary women composers, as well as those going back in history. In fact, when we went over to podcasting in December 2018—four years ago now, hard to believe!—the very first composer we presented was Florence Price.

In the midst of all her work for others, we’re glad that Nancy Van de Vate found time to compose! Sometimes she would take weeks off at a time, without phone or later, email, to get her work done. Distant Worlds is for violin and orchestra, but the composer says that it isn’t, strictly speaking, a violin concerto. The soloist takes a significant role in the work but in one place where you might expect the cadenza to be, that’s taken over by the percussion section. She explains that the music is formed into an arch. It builds up to a middle section and then falls away from that—in letters, making it ABCDCBA.

Janusz Mirynski is the violin soloist, and the Polish Radio and Television Orchestra is conducted by Szymon Kawalla in Distant Worlds, by Nancy Van de Vate.

In one of her interviews with Bruce Duffie, Nancy Van de Vate recalls how wonderful the orchestras and players in Eastern Europe were with new music. Many companies were recording over there for economic reasons, but the good orchestras in Poland, the Czech Republic, and elsewhere, were very good, especially with contemporary scores, since they were doing so much of it. Van de Vate gave the music to the soloist Janusz Mirynski, who was the concertmaster of the Polish Radio and Television Orchestra. He lived in a small apartment with a wife, two children, one of which was a colicky baby, and one ill mother-in-law. Yet he learned everything in 10 days and had suggestions for interpretations and tempos in various places, all of which illuminated her music and all of which she was overjoyed to accept. Nancy Van de Vate discovering her Distant Worlds on Fleisher Discoveries.

Charbel, a Mexican pianist living in Houston, just caught our show on Ricardo Castro, and wrote in to thank us and to find out more, and Karl outside Philadelphia loved the Berezowsky podcast, so thanks to you both!

All of our podcasts are available all of the time, so check us out anytime for what we hope are the interesting stories that we have for you. Stay tuned for more Fleisher Discoveries podcasts coming to you every month, right here.