Twenty-two years and while we’ve had a few Christmas pieces on Fleisher Discoveries, we’ve never done a Christmas show, until now. 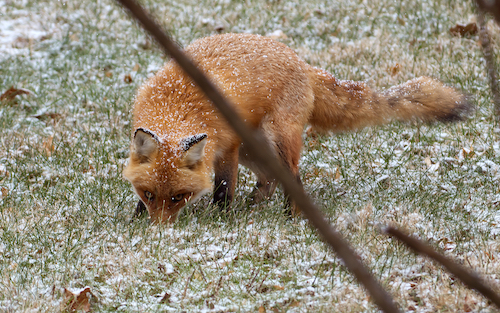 I was thinking it’s been a while since we’ve done a Christmas show, but whether it’s a sign of age or it’s just my general feeblemindedness, as I look back I couldn’t find any Christmas show. We did bring out the William Henry Fry Santa Claus Symphony but that was in January 2019. Back in our radio days there was a Bach Christmas cantata, along with his Coffee Cantata, in December 2014: sacred and secular together. Then, we have to go all the way back to 2005 for one little but delightful piece, the Christmas Fantasy by Ann Wyeth McCoy, a composer from the Wyeth family of painters.

Finally, all the way back, almost to the dawn of Fleisher Discoveries, to December 2003, one year after we began, and to that same Santa Claus Symphony of William Henry Fry, when we brought it out for its maiden sleighride after we produced the CD of all-Fry works.

But right now we’re going to have an all-Christmas show this December, beginning with a piece that isn’t really about Christmas at all, but has become closely associated with it because of a book. It’s a brief mention, you’d almost miss it as it goes by, but the book is A Christmas Carol by Charles Dickens. The Ghost of Christmas Past takes Scrooge back to the Christmas party given by his good old employer Mr. Fezziwig. Then, “the great effect of the evening came after the Roast and Boiled, when the fiddler … struck up ‘Sir Roger de Coverley’. Then old Fezziwig stood out to dance with Mrs. Fezziwig.”

When you’re striking up Roger de Coverley, you’re playing the country dance called Roger de Coverley. The name refers not to a man, but to an animal, the fox, and depicts, if you may imagine, the fox’s darting in and out of cover. So let’s begin our Christmas celebration with Scrooge and the Fezziwigs. Since last month’s Fleisher Discoveries spotlight was on Samuel Coleridge-Taylor, and he was such a fine example of the British light classical style, let’s keep in that vein with A Christmas Dance, Sir Roger de Coverley by the English composer Frank Bridge. He composed it for string quartet in 1922 and expanded it to string orchestra a year later. Benjamin Britten conducts the strings of the English Chamber Orchestra.

A Christmas Dance, Sir Roger de Coverley by Frank Bridge, who lived from 1879 to 1941. The conductor was another English composer, Benjamin Britten, who conducted the English Chamber Orchestra as we begin our Christmas celebration on this month’s Fleisher Discoveries. I’m Kile Smith.

Why don’t we stay with that early–20th-century English sound and the sound of the string orchestra and go to a Christmas Suite for Strings by Alec Rowley? Not only a composer, Rowley was an organist, pianist, radio broadcaster, teacher, and writer. The goal of much of his writing and composing was education, and so there’s a clearness in his music that’s attractive. He really knew what he was doing.

From his suite we’ll hear the Prelude, Sarabande, Bourrée, Fughetta, and the Finale. Music from the Christmas Suite for Strings by Alec Rowley, the Tasmanian Symphony Orchestra conducted by David Stanhope.

Selections from the Christmas Suite for Strings by Alec Rowley, the Tasmanian Symphony Orchestra conducted by David Stanhope. That wasn’t the only Christmas music Rowley composed; he also wrote music to the 1958 nativity play or opera On Bethlehem Hill, where, just as in Amahl and the Night Visitors, it is set in the time of the birth of Jesus, and a miracle happens to a child. You’re listening to a special Christmas edition of the Fleisher Discoveries podcast

It was in the August Fleisher Discoveries that we looked at Nicolai Berezowsky, the Russian violinist who came to the United States and embarked on a successful playing and composing career. We heard his Symphony No. 4, which you can listen to again, as you can hear all of our podcasts here on SoundCloud and Spotify.

He was highly regarded for his serious concert music, his symphonies and concertos, but his most famous work, other than his children’s opera Babar the Elephant, is this Ukrainian Noël, or Christmas Festival Overture. Let the composer describe it. “The most famous of all Russian Christmas carols are the koliadki almost all of which come from the Ukraine. For this Overture I have used some of the koliadki that children sing as they go from house to house on Christmas Eve, singing and dancing.”

Conductor Howard Barlow commissioned this for the New York Philharmonic in 1943, where he was guest-conducting. Barlow often played works by American composers, when he guest-conducted, when he was conductor of the CBS Symphony Orchestra, and most famously as the conductor on “The Voice of Firestone” radio program from 1943 to 1961.

Our final work on our Christmas program this month is also our longest, the Suite from Rimsky-Korsakov’s opera Christmas Eve. The composer himself wrote the libretto, based on the short story “Christmas Eve” by Nikolai Gogol. It is set in a little village in Ukraine, and uses Christmas carols, those Ukrainian koliadki that Berezowsky referred to in his work we just heard. Tchaikovsky also wrote two operas based on the same story, Vakula the Smith and The Slippers.

Vakula desires Oksana but she toys with him, suggesting that she won’t marry him unless he brings her the shoes of the Tsarina. Among all the activity in the opera is Vakula’s mother making a deal with the devil, Oksana’s father being mistaken by Vakula for a rival, other rivals coming by, and the devil whisking Vakula away through the sky to St. Petersburg, where he connives to get the Tsarina’s footwear. He brings them back to great rejoicing, of course, at the opera’s end, where Oksana finally accepts him.

For this suite, Rimsky-Korsakov extracted a dozen short episodes: Christmas Eve in Dykanka, The Ethereal Space, or Vakula’s flight, which includes the Ballet of the Stars. In that Ballet is a Mazurka, a Procession of the Stars, a Khorovod or a Slavic round dance, and a Czardas and the Rain of Shooting Stars. Then there’s The Diabolical Kolyadka, one of the Ukrainian Christmas carols, then a quite substantial Polonaise, and finally, Vakula’s Return, which includes Daybreak and a procession of two children.

It all makes up the delicate, colorful, and brilliant Suite from Christmas Eve by Nicolai Rimsky-Korsakov on Fleisher Discoveries. Neeme Järvi conducts the Royal Scottish National Orchestra.

Gene in New York City wrote in to say that he loved hearing all the fascinating historical information on our last month’s show about Samuel Coleridge-Taylor. Peter also emailed in, that it was great to learn about Coleridge-Taylor and his background. Thank you for that, and remember that all of our podcasts are available all of the time. You can check us out anytime for what we hope are the enlightening stories we have for you. Stay tuned for more Fleisher Discoveries podcasts coming to you every month, right here.