In the Midst of Life

In the Midst of Life. 2023. SATB a cappella, 15′. Text from the Book of Common Prayer. Commissioned by the William Ferris Chorale, Christopher Windle, Artistic and Music Director. Premiered by them 5 May 2023, Our Lady of Mount Carmel Church, Chicago, and 7 May 2023, Wicker Park Lutheran Church, Chicago. 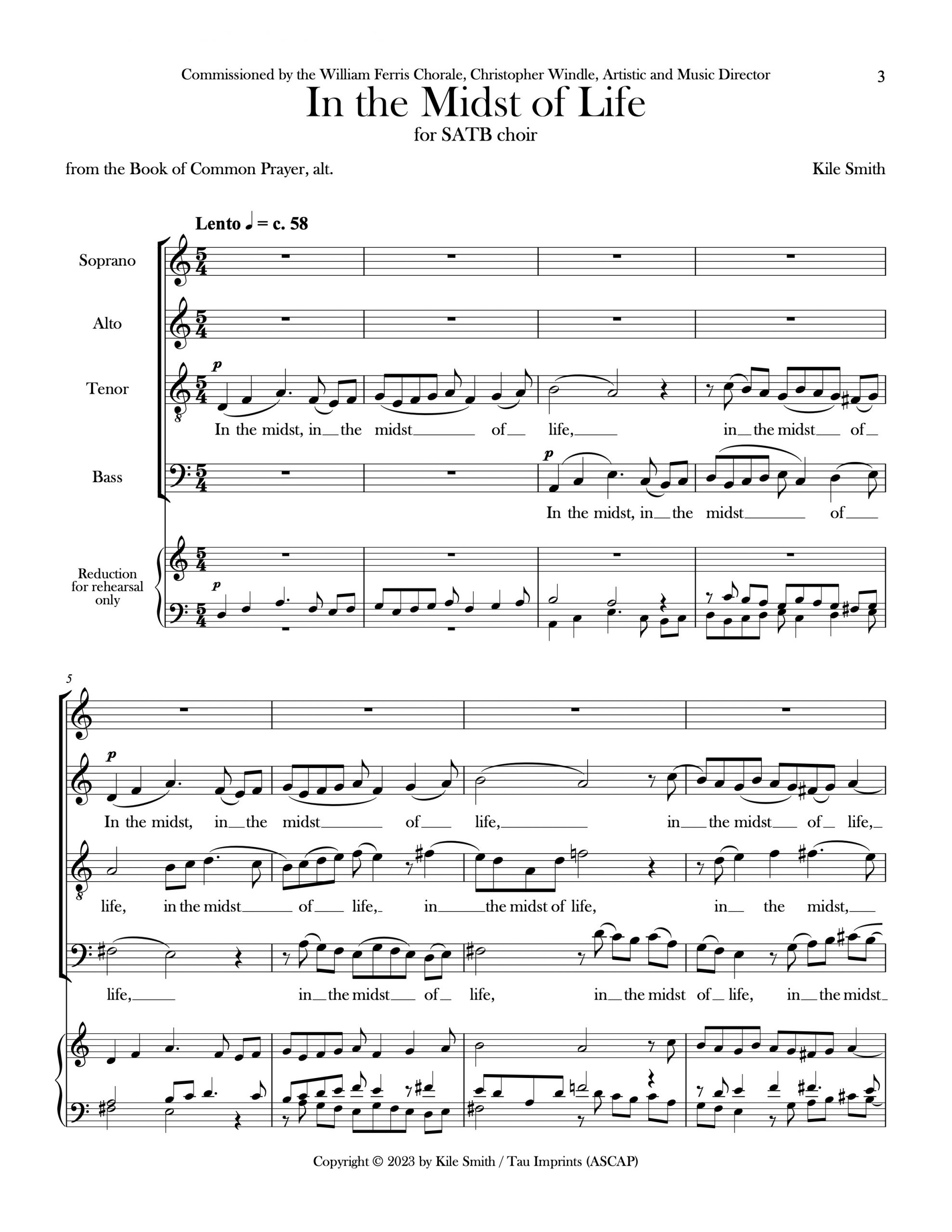 Christopher Windle asked me for a composition responding in some way to Media vita, the landmark English Renaissance work by John Sheppard. After considering options about the text, we agreed on the simplest one: I would set in English what Sheppard had set in Latin—mostly, that is—by using the poetic rendering from the Book of Common Prayer.

Media vita is not only revered, but it is long, usually lasting well over 20 minutes in duration. My work, to be at all an adequate pairing, would need to be substantial, but since the Chorale would sing it and the Sheppard on the same concert, it would be preferable if it were not quite so monumental in scope. We were originally thinking of this in the 10-minute range, but the need for the text to properly settle in became apparent as I began composing, and it ended up coming in at 15 minutes.

I have loved Media vita and other works of John Sheppard for some time. That particular English sweetness in his music is unexpectedly jarred at points by delicious cross-relations: a B-sharp, say, in one voice sweeping past a B in another voice at the same time. Teachers of tonal counterpoint warn us, with good reason, to avoid such things, but—leaving the ficta and modal theory discussion aside—sometimes the spirit of a line blows where it will, and we, not knowing where the spirit comes from or where it’s going, do well to pay heed. So, to honor Sheppard I looked for those opportunities in this music.

The text is a mixture of English translations. I am aware of inconsistencies. It begins by addressing the Lord as thee; later it is modernized to you. I enjoyed following the drama of starting with we, us, and our, yet ending with my. I wanted it to become increasingly personal.

The harmonic language follows this narrative. The opening fugue is in D dorian, one of the so-called minor modes, with the wonder of its raised 6th; in D it’s the B-natural instead of the minor-key B-flat. Then, to G dorian, back to D at the fugue’s continuation, and, at the “O holy God” section, F dorian. But “You know, O Lord,” to mirror the emotional turmoil in the text, switches to an A-flat octatonic scale, an 8-note scale colored with chromaticism and pungency, and which avoids the perfect 5th. I introduce only two exceptions to the scale, at the third iteration of “Savior”: the C (major 3rd), and finally, E-flat, the 5th. “Suffer me not…to fall from you,” hinting at A lydian, pivots the music to the “major” modes for the conclusion.

At the familiar Nunc dimittis, or “now let your servant depart in peace,” the music picks up speed, traveling through mixolydian (with the flat 7th), lydian (sharp 4th), and ionian (the “major” mode we are used to). A D major version of the opening dorian fugue subject begins “and ever shall be,” and the work stays in D major until the end, although the closing “Amen” uses, transposed, the music of “to fall from you,” with echoes of lydian. This reference to “Suffer me not…to fall from you,” binds that supplication, proper to all prayer, to the certainty of “Amen.” In the final D chord the 3rd, F-sharp, is omitted and the 6th, B, never resolves, recalling the dorian landscape that opened the work.

In the midst of life we are in death; of whom may we seek for sustenance, but of thee, O Lord, who for our sins art justly displeased?

O holy God,
O holy and strong,
O holy and merciful Savior,
deliver us not into the bitter pains of eternal death.

You know, O Lord, the secret of my heart; shut not your merciful ears to my prayer; but spare me, Lord most holy, O God most mighty, O holy and merciful Savior, You, the most worthy Judge eternal. Suffer me not, at my last hour, through any pains of death, to fall from you.

Lord, now let your servant depart in peace, according to your word. For mine eyes have seen your salvation, which you have prepared before the face of all people: a light to lighten the nations, and the glory of your people Israel. Glory be to the Father, and to the Son, and to the Holy Spirit. As it was in the beginning, is now, and ever shall be, world without end. Amen.