The hymn to Mary, Ave Maris Stella, is thought to be from the 8th to the 10th centuries, but its roots reach down even deeper into history. There are at least four chants associated with it: three are found in the Liber Usualis, and the most popular of those is paired with yet another in the Liber Cantualis. Each chant, or a shadow of each one, appears in various guises throughout this setting.

The name Maris Stella goes back to a translation of a book of biblical place-names by Eusebius, an important 4th-century historian of the Church. Jerome translated the Greek name Mariam into Latin as Stilla maris, “Drop of the sea.” A later scribe, however, changed it to Stella maris, “Star of the sea,” and from then on the term was associated with Mary as the guiding star over troubled waters. Churches by the sea have been named Maris Stella, and Mary is seen as the protector not only of sailors, but of anyone figuratively “at sea.”

Many composers over the centuries have set these seven stanzas. Piffaro and I thought that it would not only be an excellent vehicle for the voices of Variant 6, but that its colorful, passionate text would provide ample opportunities to display the multifaceted Piffaro instrumentarium. 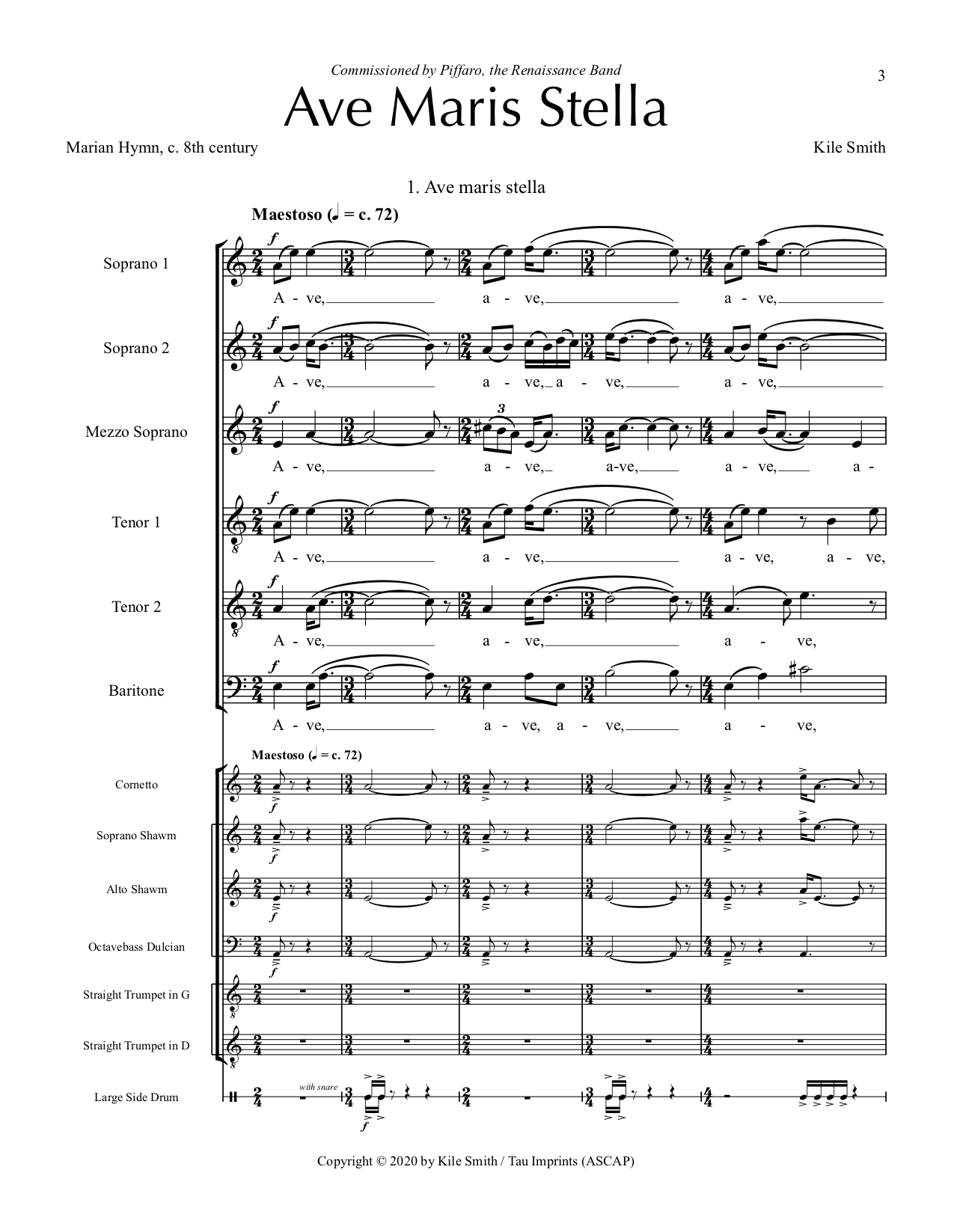 1. Ave maris stella, / Dei mater alma, / atque semper virgo, / felix cœli porta.
Hail, star of the sea, / Nurturing Mother of God, / And ever Virgin, / Happy gate of Heaven.
A street protest inspired the opening of Ave Maris Stella. The Council of Ephesus met in 431 to discuss the attempts by Patriarch Nestorius to eliminate the popular term for Mary, Theotokos or “God-bearer.” He argued that it should be Christotokos: that Mary brought forth Christ, but not God.

The people were having none of it. They chanted Hagia Maria Theotokos, “Praise to Mary the Bearer of God” in the streets while the Council met. The effect of their protest is unknown, but the picture of bishops wrangling over theology with vox populi, vox Dei ringing in their ears is an enticing one. And, the Council did decide that Nestorius was attempting to divide what could not be divided. It declared Nestorianism to be heresy.

That cry from the streets 16 centuries ago, fervently trying to shove its way behind closed doors, is what I imagined for the beginning of Ave Maris Stella, Mary as the “Nurturing Mother of God.”

This raucous opening repeats Ave, and then gives way to a fanfare by two straight trumpets, the valveless natural brass instruments that sometimes have banners hung from them at ceremonies. Fanfare trumpets often loop their tubing once around to save space, but Piffaro’s straight trumpets stretch forward, depending on the length of tubing used for various keys, to six or seven feet.

During the time Piffaro and I were discussing the commission, I saw Greg and Erik play these straight trumpets in concert, and I knew at once that I had to use them. In pairs of matched keys they’re normally used in fanfares of imitative counterpoint, but I decided to use one in G and one in D to slightly expand the available pitches at the bottom of their respective overtone series, where their most idiomatic range is. This movement is in one of my favorite modes, dorian (on D), with excursions into D major, especially at the word felix, “happy.” The most-sung Ave maris stella chant is carried by the baritone voice.

2. Sumens illud “Ave” / Gabrielis ore, / funda nos in pace, / mutans Evæ nomen.
Receiving that “Ave” / From the mouth of Gabriel, / Establish us in peace, / Transforming the name of “Eva.”
Leaving church councils aside, the Ave, of course, refers to the original “Hail” from Gabriel to Mary, announcing that she would bear Jesus. In this famous word-play, Ave spelled backward is Eva or Eve, the first mother of us all, so by Mary becoming the mother of Jesus, Eve’s curse of original sin is thereby lifted.

The music, in G major, reflects this with a triple canon, or three different melodies singing the stanza, each one strictly imitated and woven with the others. (The third canon follows the shape of the Ave maris stella chant No. 73B in the Liber Cantualis.) The voices are then replaced by recorders, and while they play out the canons, the voices, singing together with phrases taken from the canons, repeat the entire stanza. They finish simply: “Ave, ave” is answered with “Eva, Eva.”

3. Solve vincla reis, / profer lumen cæcis, / mala nostra pelle, / bona cuncta posce.
Loosen the chains of the guilty, / Send forth light to the blind, / Our evil do thou dispel, / Entreat for us all good things.
The most intricate counterpoint of the work musically represents these chains and their gradual loosening. This movement is in D minor. First to appear are the sackbuts. To introduce the first line of text they play a canon at the unison, the bass sackbut entering only one beat after the tenor. (This canon is derived from the beginning of the chant used in the first movement.) At their second entrance the bass follows a third below and two beats later. The third time, the bass is a fifth below and four beats behind, and at the final statement they play together at the octave.

Next to be heard, just prior to the singers’ entrance, is the soprano recorder–cornetto pair. They play a canon similar to that of the sackbuts’, always in octaves, but again, the second voice delays its entrance more and more each time. The first time, the recorder enters one beat behind. The second time, two beats, the third, three, and finally they play together. In between each of these statements, over the double-reed trio, they play the tune in long half notes.

The singers are also assembled in pairs: 2nd tenor and baritone in octaves sing the tune, but in inversion; 2nd soprano and 1st tenor in octaves, singing the tune (right-side up) but on a different starting note; and 1st soprano and mezzo singing in somewhat freer counterpoint.

Finally, the trio of tenor shawm with tenor and bass dulcians comment in between the lines of text, using musical material from the chant. The second half of each instrument’s line mirrors its first half. Each entrance, instead of delaying as the other instruments, comes in quicker each time until, at the end, they start together. The top and bottom instruments play the same music each time. The tenor shawm alternates its line between one beginning on a C and one transposed to begin on an F.

4. Monstra te esse matrem, / sumat per te precem / qui pro nobis natus / tulit esse tuus.
Show thyself to be a Mother: / Through thee may he receive prayer / Who, being born for us, / Undertook to be thine own.
Its melody inspired by another Ave maris stella chant, one which opens with stepwise motion up and down, this movement for three women’s voices and two sackbuts returns to the dorian mode, on A. It uses antiphons or choruses, the antiphon on Monstra te repeated by the instruments. The voices and brass continue fairly independently of each other, the sackbuts providing only spare accompaniment, up until they are brought together at pro nobis natus, “being born for us.”

5. Virgo singularis, / inter omnes mitis, / nos culpis solutos / mites fac et castos.
O unique Virgin, / Meek above all others, / Make us, set free from our sins, / Meek and chaste.
This is in what is to me the most bittersweet and ineffable of modes, lydian, on C. Much like a major scale but with the 4th raised one-half step, the lydian mode excels at conveying both comfort and amazement at the same time. (I used it for the Psalm 113 in Vespers, also commissioned by Piffaro, for that reason.) Here, it epitomizes the very concept of the virgin mother of God. Cornetto and three recorders comprise a trio sonata commentary, slow and somewhat dance-like, between the vocal statements, the two lower recorders, mostly in octaves, providing the basso. This movement echoes the stepwise motion of the chant used earlier. At the end, castos, “chaste,” receives a quirky 5/4 measure (the rest of the movement being in 2/2, 3/2, and 4/2). Then castos is repeated, with the same music as was used with Virgo at the beginning.

6. Vitam præsta puram, / iter para tutum, / ut videntes Jesum / semper collætemur.
Bestow a pure life, / Prepare a safe way: / That seeing Jesus, / We may ever rejoice.
An extensive alto recorder solo progresses along with the trio of men, joined by the drone of a string drum which establishes the mode of E hypophrygian. Phrygian is more “minor” than minor, with its lowered 2nd degree of the scale, but the cliché of the minor key as sad is both relatively recent, and actually not even then always true. Here, rejoicing comes from seeing Jesus, which is made possible through a pure life; this mode seemed most capable of handling all those layers of wonder and emotion. The repeatedly struck single E on the string drum seems to indicate the necessity of purity, leading toward the elated, even romantic writing at Jesum.

7. Sit laus Deo Patri, / summo Christo decus, / Spiritui Sancto / tribus honor unus. Amen.
Praise be to God the Father, / To the Most High Christ be glory, / To the Holy Spirit / Be honour, to the Three equally. Amen.
A solo cornetto introduces the entire ensemble reprising the opening music, this time to the Sit laus Deo Patri doxology. The fanfare for straight trumpets returns, but longer this time, and demanding even more intricate playing. The movement finishes with an extended “Amen” begun by the women, answered by the men, then the instruments, then everyone together. The spirits of the fanfare and perhaps that Ephesian protest return and propel the final pages of Amens to conclude the work.

← The Bremen Town Musicians, for Orchestra, on CD Intrada, for Six Horns →