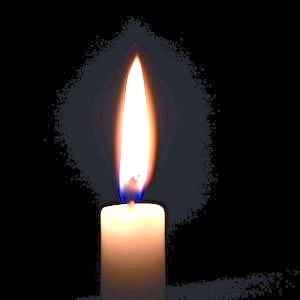 1. In the darkness, ﬁre is kindled
2. Procession
3. Exsultet

The Exsultet is an ancient chant sung near the beginning of the Easter Vigil, and is without parallel for its ecstatic yet profound utterance of joy. The Vigil, ﬁxed on the Saturday evening between Good Friday and Easter, balances, as all services do, repentance and thanksgiving. But on this day the tension is the most acute. While the remembrance of Friday’s sacriﬁce still resonates, the anticipation of Easter’s glory intensiﬁes as dusk falls.

This horn concerto follows the unfolding drama of the Vigil’s opening, the soloist reﬂecting the interior meditations of the assembled. The three movements are played without pause. The people gather after sunset outside the sanctuary, with unlit candles. The rubric from the Book of Common Prayer states simply, “In the darkness, ﬁre is kindled,” providing the title of the ﬁrst movement. One by one, the candles receive ﬂame. Contrition and the memory of sacriﬁce mingle with the growing light as each person is illuminated in silence. Only when all have received is the darkened nave entered.

During “Procession” the evening chorale “Christe, du bist der helle Tag” comes to mind, although no hymn would actually be sung now. In the presence of the light of day, night is banished. At appointed times “Lumen Christi” is intoned, answered by “Deo gratias.” This is the only music from the service that appears in the concerto, here radiated by three solo violins. The enormity of the sanctuary regards the congregants as they gradually become aware of the space that both humbles and uplifts.

The Deacon approaches the lectern, and the upturned faces, reﬂecting the candlelight pressing against the darkness, follow the one who will announce what, until now, has only been hoped for. To the Deacon, the lowest-level cleric, to this one alone is given the work of proclaiming the one word all have gathered to hear, the word that will shatter the gloom of despair and pierce the soul.

It is an ancient, mystical invocation. One imagines the angels and all creation slowly turning, attracted to the light and the chant, and stepping into a dance, giving themselves over to an estampie of praise. All are caught up in it: one leads, then another. Even in rejoicing, though, contemplation travels alongside, and so the concerto ends much as it began, in the silence of remembrance, in the warmth of gathering, in the ﬂicker of the light of hope.

← There Is No Great and No Small Four French Carols →