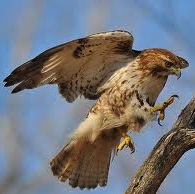 Red-tail and Hummingbird. For various ensembles of 5 or 6 players. 6′ Commissioned by Orchestra 2001 and Piffaro, the Renaissance Band for joint concerts on February 22nd, 23rd, and 24th, 2013, for a short piece to contrast the sound of modern and early-instrument ensembles.

From our front porch last summer my wife and I witnessed a young hawk attacked and chased by a hummingbird. The musical depiction of this beleaguerment became Red-tail and Hummingbird. A lazy afternoon’s peaceful reverie of chirps and replies is shattered by the two feathered protagonists. In canon, one voice closely chases the other, filling the human and avian observers with awe, and the human observers also with humor. As the hawk vainly attempts to flee its tormentor, an aerial tango is imagined, then a waltz. They leave and—breaking the false hope of peace—return, but do, finally, leave for good.

I first toyed with the idea of a work the groups would play together, but leaving aside the pitch differences of the instruments (Renaissance instruments are generally pitched a half-step higher than moderns), I decided that it was important for the players to feel comfortable within their own tuning systems. Musicians have performed exclusively in equal temperament for more than a century, but historical music specialists now play in a variety of just-intonation sound-worlds. Mixing them, I felt, would only make some instruments appear to sound “off” to the audience. So each group played the work by itself in each concert.

Red-tail and Hummingbird is written for three matched duos, but any six instruments that fit the ranges may perform this. As much as is possible, pairs of same or similar voices may make up each of the three duos. At the premieres the instrumentation was:

A four-part series on the writing of Red-tail and Hummingbird begins here.

← The Three Graces The Nobility of Women →