The Voice of One Who Spoke 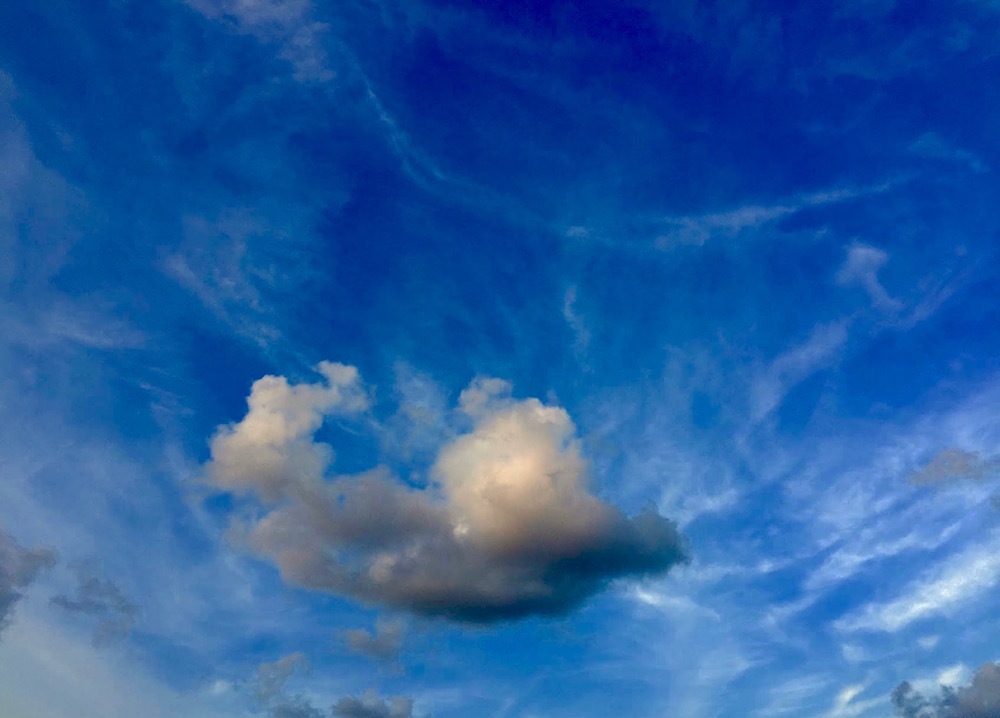 This work is based on the vision of the prophet Ezekiel, as recorded in the first chapter of his book. His account of the four creatures, the wheels, how they looked and moved, the sounds they made, and his response, inspired this musical depiction. The Hebrew letters of the text have been manipulated to generate musical pitches, and those have become the basis for the composition.

This work is based on the first chapter of the book of Ezekiel, the account of the prophet’s vision of the four creatures, the wings, the wheels, the fire, the throne. Verses 16 and 17 were the inspiration for the musical setting of the chapter: “The appearance of the wheels and their workmanship was like the color of beryl, and all four of them looked alike, their appearance and their workmanship as it were a wheel in the middle of a wheel. As they went, they went in any of their four directions, without turning as they went.”

In addition to an introduction and Coda, there are 28 sections, corresponding to the 28 verses of the chapter (although sections 4 and 27 involve repeated material). All of the pitches in this work, except for the Coda, are generated from the letters of the Hebrew text. A system was devised converting the letters into numbers, and from there to musical notes. The first letters of words provide most of the pitches, and certain words ending in Hebrew finals, which are special forms of certain letters, take on added significance. These words provide more pitches, and sometimes an underlying tonality.

Musical decisions based on the sense of the text, rather than any further systematizing, guided the handling of whatever pitches presented themselves. Word and letter order were not followed slavishly, but were manipulated as the music seemed to suggest. However, the integrity of the individual Hebrew sentences, which correspond to the verses (except for 8 and 9, which are one sentence), was always honored. The sentences provided their own tonal centers, which were followed from sentence to sentence, however they led. Sometimes tonal centers are strong, sometimes not.

For example, the short verse 2 has a tonal center on A-flat in this scheme. There are eight words in the Hebrew text of this verse, the first letters of each yielding the pitches E-flat, G, two A’s, and four B-flats. In addition, two of the words end in finals, and the letters of those words yield E-flat, three G’s, A-flat, B-flat, two B’s, and D-flat. Those are the pitches used in section 2. The B-flats and G’s were stressed since there were so many of them, and consequently the tonality on A-flat is hardly there. Plus, although the first three verses yield tonal centers on A, A-flat, and D, the bass F was drawn out from the introduction all the way to verse 4, since the form suggested a break there. So, in this case, the individual tonal centers are subordinated even more.

Any of the musical decisions could have been made differently, depending on how the text or scheme was manipulated. For example, the entire text yields a tonal center on F if every letter is added individually according to this system, but B-flat if every word is added individually. So the work starts in F and switches to B-flat at the Coda. It does end in F as it begins, but with the feeling now of F as the dominant of B-flat rather than its own tonic, as if something were to follow. This resonates strongly with the end of the text: “I fell on my face, and I heard the voice of one who spoke.”

The proportions of the golden mean (given two unequal parts, the ratio of the small to the large equals that of the large to the whole) shape the composition. The primary division occurs at verse 20, and the resulting sections are likewise further divided a number of times (all of the sections are marked with indents in the English translation that follows). One of the delights of working in this way is to discover how the text breaks itself down into these sections, and to find ways to make musical decisions accordingly. The gathering of verses 1-3 into one section, mentioned above, comes directly out of this rendering. Instrument designations inserted into the text serve only as signposts to help in following the music; the instruments have no symbolic importance in themselves.

Martin Luther’s “Holy, holy, holy” from his Sanctus setting is the basis for the Coda.

1 [Cellos] Now it came about in the thirtieth year, on the ﬁfth day of the fourth month, that while I was among the exiles by the river Chebar, the heavens were opened, and I saw visions of God. 2 [add Violins 2] On the ﬁfth day of the month, which was the ﬁfth year of king Jehoiachin’s captivity, 3 [Violins 1, Violas] the word of the Lord came expressly to Ezekiel the priest, the son of Buzi, in the land of the Chaldeans by the river Chebar, and there the hand of the Lord came upon him.

4 [Moving ahead slightly, Solo Violin] And as I looked, behold, a whirlwind came out of the north, a great cloud with ﬁre ﬂashing out and surrounded by bright light, and in its midst something like glowing metal in the midst of the ﬁre. 5 [Piccolo] And in the midst of it was the likeness of four living creatures. And this was their appearance: they had the likeness of a man. 6 [muted Trumpet] Each one had four faces, and each one had four wings. 7 [Xylophone chords] Their legs were straight, and the soles of their feet were like a calf’s foot; and they gleamed like the color of burnished bronze.

25 [Solo Violin] And there came a voice from above the expanse that was over their heads, when they stood still and had lowered their wings. 26 [Double Basses] And above the expanse that was over their heads was something like a throne, looking like sapphire; and on that which looked like a throne, above it, was a ﬁgure that looked like a man. 27 [Strings] And I saw something like glowing metal from his loins upward, like ﬁre all around within it, and something like ﬁre from his loins downward, and a radiance all around.

Converting Hebrew text to pitches
My goal was a system that equitably used all the notes and all the letters, and that had some relation to the acoustics of tonality. Any music that disregards this relation does so at its peril, I believe, as it devolves into mere mathematical process, the further it removes itself from the acoustical world. Music, after all, must always move, and motion, whether it be harmonic or melodic, exists only if a tonal center can be perceived by the listener. There is no movement without a center.

How to fit the 12 notes of the chromatic scale into the 22 letters of the Hebrew alphabet then became the task. But in addition to these letters are five finals, or special forms of certain letters. The finals carry great significance in Jewish mystic tradition, and I thought that they should not be overlooked. That made 27 letters. However, three letters—aleph, mem, shin—are considered so important that they are revered as “mother” letters in the tradition of the mystics. If I could account for these in some other way, I would have 24 letters to which I could assign the numbers 1–12 two times over. This numerological matching of numbers to letters is a normal part of Jewish meditation tradition, although that tradition is based on 10.

I decided to assign the mother letters a numerical value of zero. Aleph has such pride of place that it actually rules the entire system, as I explain below. And since aleph, mem (and its final), and shin occur so frequently in Hebrew texts, this would give greater voice to some of the other, lesser-used, letters. The base-12 alphanumeric conversion then becomes:

I assign numbers rather than pitches to the letters, since here is where the overtone series, the “acoustics of tonality” I mentioned above, is introduced. Thus, in C, for instance, 1 (the lowest fundamental)=C; 2 (the next highest fundamental)=G; 3=E; 4=Bb; and so on up to 12=Db. Each letter’s pitch, then, is determined by its context, or by what overtone series it exists in. Zayin (6) in a B context would translate to E, but in the context of G it becomes C. We can make the context as broad or as narrow as we wish; in setting large blocks of text each verse can be its own tonal center, or we could also use a word by itself and relate each letter to it.

It seemed natural to use the first letter, aleph, as the ultimate context. Aleph is throughout tradition the beginning, the A. So, we can add up the letters of any sentence, calculate our numbers by adding and reducing, and using A as the prime context come up with pitches. For instance, the Hebrew letters of Psalm 46:1, “Elohim lanu makhase vaoz ezra v’tsarot nimtsa m’od” (God is our refuge and strength, a very present help in trouble), totals 146, which by base-12 reduction equals 11 (1+4+6). In A, 11=C, so the tonal center of that verse is C. The first word’s letters of aleph-lamed-heh-yod-final mem, yielding the numbers 0-11-4-9-9, become, in C, the pitches (none)-Ab-Eb-D-D, ours to use as we wish. If we wanted to take it further, the first word’s reduction itself becomes 6, which in the context of C is F. We could use that as a sub-tonality and relate its letters to F if we chose. Since this word ends in a final, I would give its tonal center more weight than other words in the sentence.

In viewing the choices that went into inventing this, it must be obvious that I claim no mystical or extra-musical significance of any kind to this system. There is no apparatus that can create spirituality, let alone music. This is simply a way to generate notes. But one of the joys of working in this fashion is in having one’s attention driven to the text, rather than to one’s interpretation of that text, and indeed, this was the purpose behind my investigation—to see how far I could allow the text to speak for itself. It is true that we never eliminate interpretation, but by using this system, the compositional process itself becomes a form of meditation. This, I believe, benefits not only the composer or anyone wishing to study the music, but also performers and listeners, who will know at least that every note is chosen with a great deal of reverence to the text.