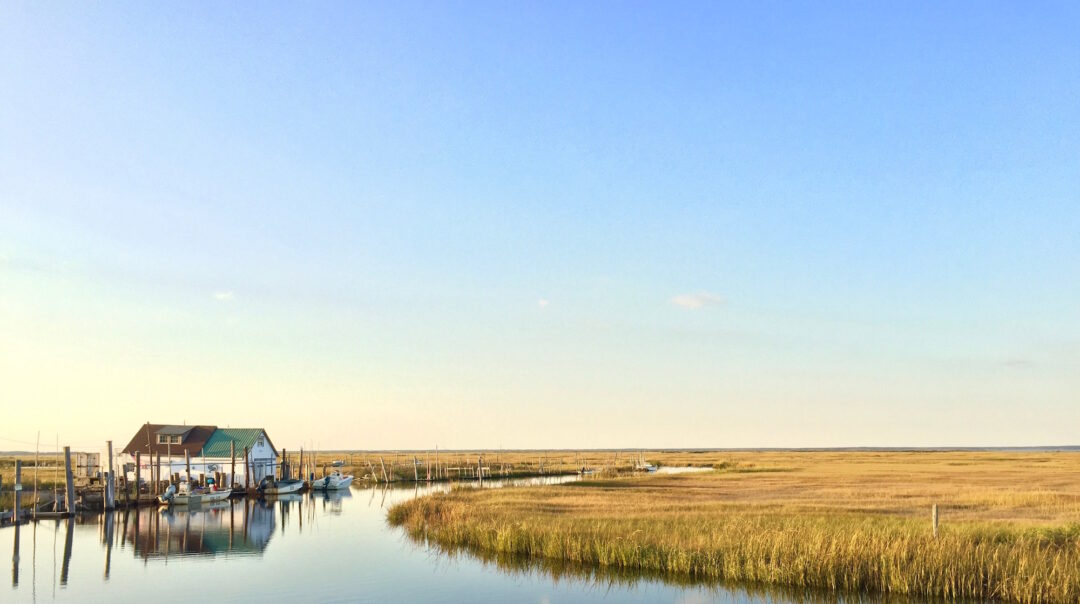 It delighted me when Lyric Fest approached with a commission for a concert titled “World Spirituality in Song.” I like this organization. Timothy Bentch had beautifully sung one of my Gerard Manley Hopkins songs, “Spring and Fall,” on a Lyric Fest concert, and I’ve enjoyed other programs I’ve been able to get to. They generate a joyous energy in their concerts, and have expanded beyond art song to vocal ensembles and collaborations with the Pennsylvania Girlchoir.

See the entire score and hear a live performance here at MusicSpoke.

Various factors led to the timetable being tight when they approached me, so the concert was closer upon us than we might otherwise have chosen. So I suggested a piece for two psalms, one of which would be an adaptation of the already-composed Psalm 113 from Vespers. I also liked the fact that it was already in Latin, that most universal of languages, for a “World Spirituality” concert. They agreed.

I don’t think I saved myself any time, though. Psalm 113 is originally for SATB (with some divisi), two sackbuts, and harp. My job now was to transcribe it for mezzo-soprano solo, 2-part girls’ choir, and piano, an enticing combination to me, especially with Suzanne DuPlantis and these wonderful musicians. But it was quite an undertaking.

The sackbuts, doubling the men in that gorgeous carpet of sound: all gone. That piquant touch of the harp: gone. In their place: three treble lines and piano. Everything had to be re-imagined; all of the voice-leading, re-worked. The entire sound had to be thrown out the window and rebuilt from top to bottom. Since the texture of the male chant choir, emerging out of silence, no longer existed, I thought it would be better if the soloist’s entrance proceeded out of something, so I composed a few introductory notes for the piano. While all in all it was a lot of work, it was exhilarating meeting the challenges in the construction of this new piece.

For its companion I chose Psalm 150. It is, after the 23rd, the most well-known psalm. It needed to be as fast and relentless as 113 was relaxed and thoughtful. The repeated Alleluia was sandwiched around the call-and-response verses that naturally lent themselves, I thought, to the solo/choir tapestry. That Alleluia came to me first, although I changed it a good deal from its original conception. I had written an accompaniment to it, but I wanted its ﬁrst appearance to be a cappella: 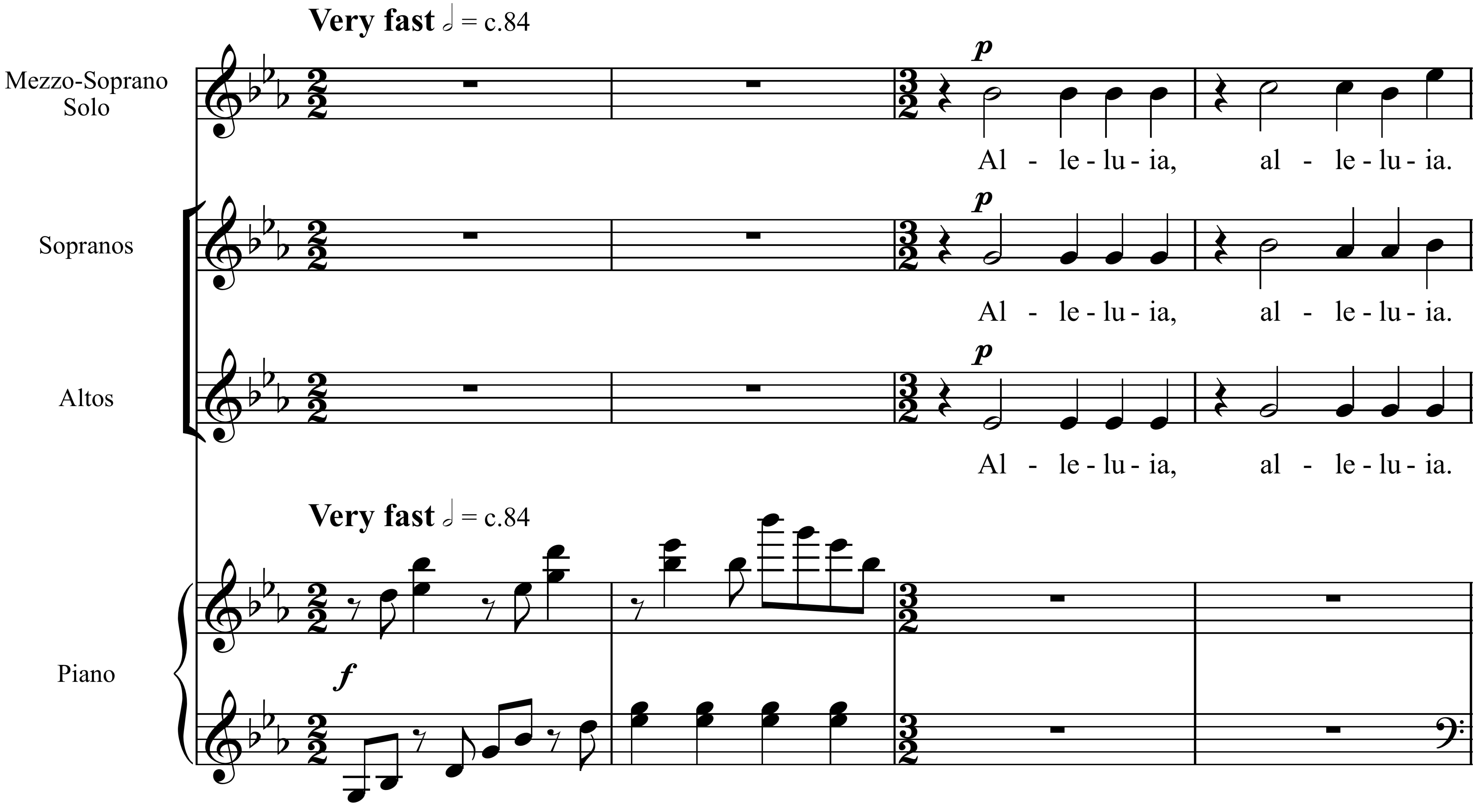 At the ﬁnish, I tried differently elaborate iterations of the Alleluia, in the voices and piano, but the voices refused to be fussed with any further. Good for them; they were right. The piano part was right in front of my nose, being the left hand of bar two above: 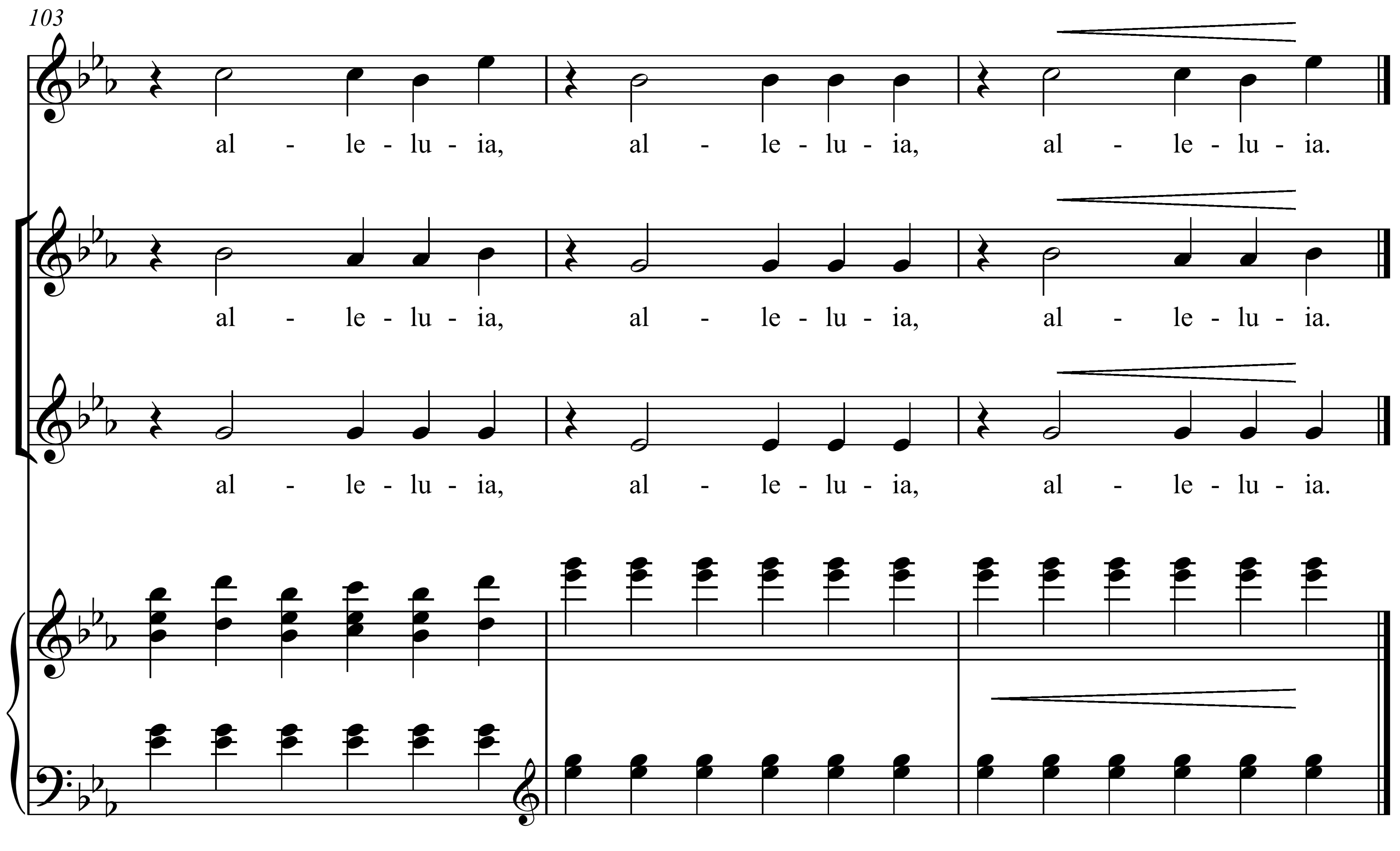 I felt that it was now pared down to its essence, and so anything else added would be unnecessary. Thanks to Suzanne for suggesting the title. I’m not very good at coming up with titles, and was using the quite literally true yet quite boring Two Psalms.

[Update. There’s an interview with me about the piece on the Philadelphia Camerata site here.]

I like what A. J. Keller of Beloit College wrote when he conducted this with his Chamber Singers Masterworks Chorus on May 2nd, 2016:

He sets [Psalm 113] in a sort of 21st-century version of Gregorian chant, in the Lydian mode, loosely familiar to contemporary ears but always containing a sense of harmonic buoyancy. The second piece is a setting of the familiar Psalm 150, a jubilant affirmation of faith and adoration. Smith uses the inflections of the text to counteract the metrical regularity of the accompaniment, essentially creating polymeter; the singers and the piano have only a tenuous connection to each other. The resulting music has a childish, innocent joyfulness and fragility; it constantly feels like the piece is on the verge of completely falling apart.