Vespers for a Bach Orchestra 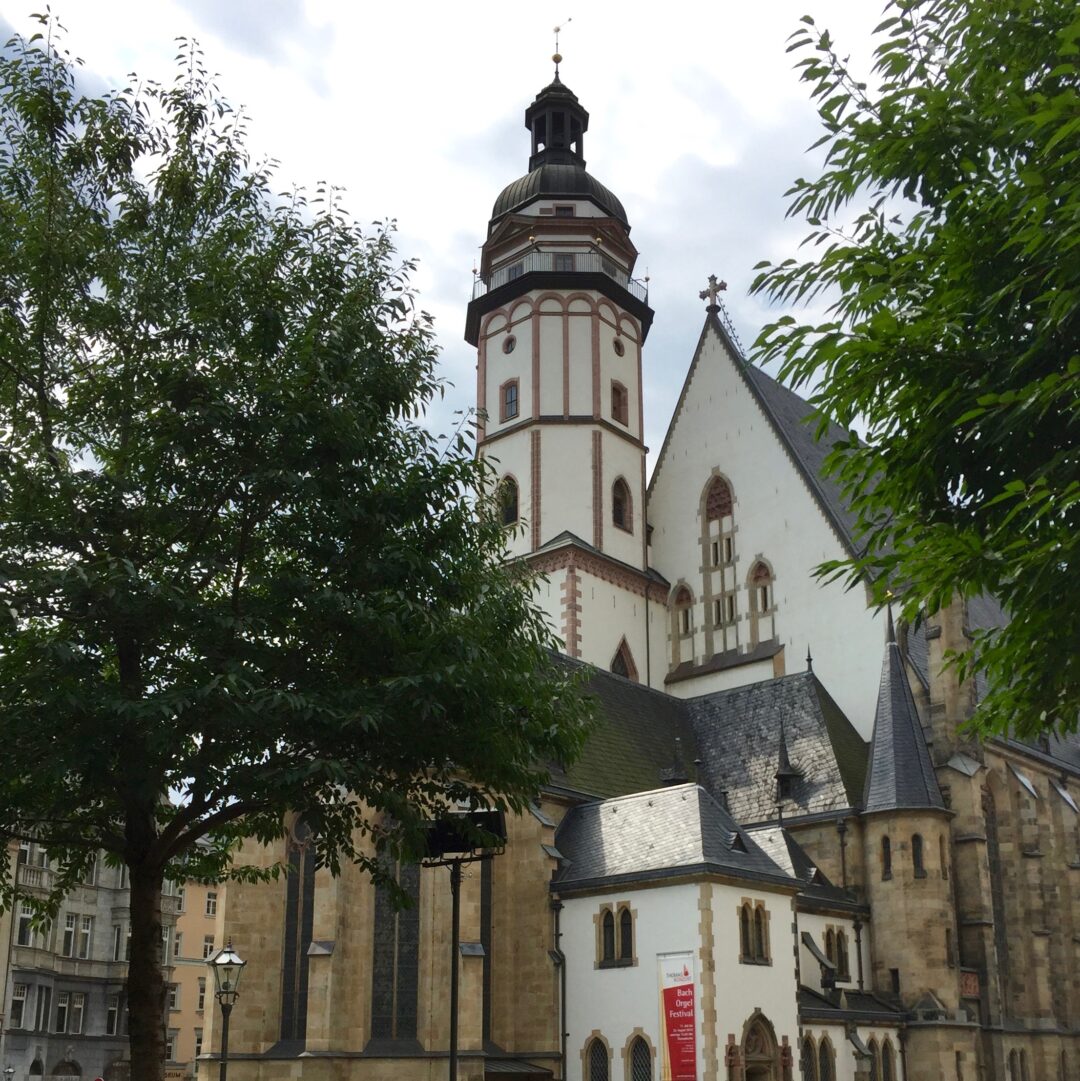 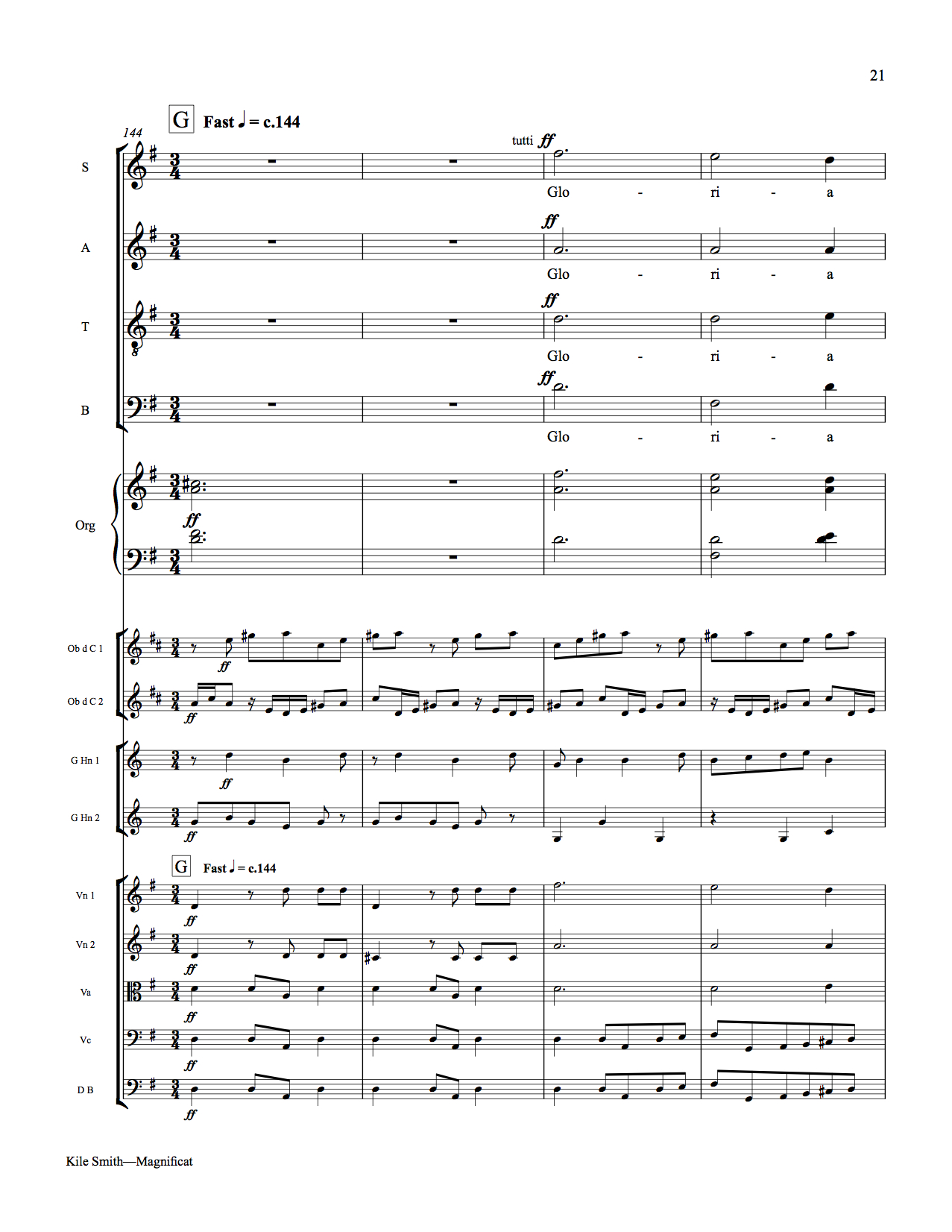 Beginning of the Gloria Patri from Magnificat, Vespers.

Bach was hanging over my head, and I wanted nothing to do with him. I have told the story once or twice about how I composed Vespers in fits and starts, about how the a cappella Herr Christ, der einig Gotts Sohn was the first to come to life, how the recorder-effusive wash of Veni Sancte Spiritus was next, and how working on these sections, while necessary, enabled me to keep putting off the main business of Vespers, which was to write a full-bore choral-and-Renaissance-instrumental piece. I finally, literally, had to face the music in the opening hymn, Wie schön leuchtet der Morgenstern.

But hanging over my head was Johann Sebastian Bach, in the guise of his own “Wie schön leuchtet” cantata, his Cantata No. 1. This haunted me just as Beethoven’s Ninth Symphony haunted Brahms while he composed his First. The opening movement of BWV 1, in its swirling, independent counterpoint, in its refracting of light around the Queen of Reformation chorales, is as daunting as it gets. Bach is a spine-shivering force of music. There are other great composers, but no one—not Beethoven, not Mozart, not anyone else—makes me want to give up any thought of being a composer, as Bach does.

So the Bach Wie schön leuchtet faced me in that early stage of Vespers as I tried manfully to construct my own Wie schön leuchtet, to build a worthy edifice of counterpoint, choral power, and instrumental brilliance. I tried four times to put at least a page, a few measures, together, and four times I failed.

I was beating my head against Bach and Bach didn’t budge. So I did what any sane person would do: I gave up. I gave up trying to write like Bach. I gave up thinking about him. I thought, instead, about what was right in front of me, the voices, and the instruments, and specifically, the shawms. And only then, I could hear what the shawms wanted to do. Simple notes fanfared out, and other notes, in voices and instruments, chugged into place, and soon the entire hymn setting was composed. When I had finished only the first verse, I knew I could write this Vespers. And I had forgotten, surprisingly easily, about Bach.

And so it was, that when Matt Glandorf asked me to re-orchestrate Wie schön leuchtet, Psalm 113, the Magnificat, and Deo gratias for the orchestra Bach used in his Cantata No. 1, I laughed out loud. Bach was finding me out again. My problem wasn’t that I had to think about Bach. No. Not only must I not think of Bach, but I must not even think of my Vespers. I had to think of, again, what was in front of me, the instruments. They were not “the Bach orchestra,” but were only instruments: strings, organ, oboes da caccia, and natural horns.

Strings and organ (a smallish positiv without pedal) I am familiar with, so I re-cast suitable music for them. Strings would be few. The caccias are double reeds in the same key as English horns—alto oboes, in effect—but with their own characteristics. I made use of a great reference: our oldest daughter, Priscilla Herreid. A bright light in the historical winds firmament, she would be playing the concert, and she made me aware of a few issues caccia players have to deal with.

The horns took me a bit longer. I had never written for natural horns, but Steven Marquardt, who also would be playing, helped greatly to un-confuse my research. These instruments have no keys or pistons to flatten and sharpen pitches, so players use the acoustical phenomena of the brass tubes to produce notes. I had avoided chromatic or non-key tones, but I did not fully grasp how the physics of the harmonic series affect the particular octaves the horns utilize. Steven made sense of it all for me.

There was one other reference I went to. Bach’s own score for his cantata became, at last, my friend, and not a wall to hit my head against. His writing for the caccias, horns, and everything else made profound sense. He was teaching me, as I stripped down the music and rebuilt it from the ground up.

I loved looking over that score. Whatever had I been afraid of? Bach ended up having his say over Vespers after all.

← Behold the Best, the Greatest Gift May Day →