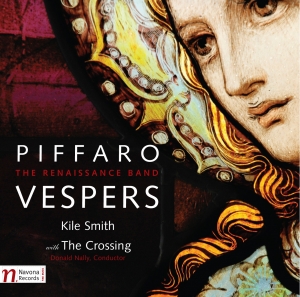 Concert and CD reviews of Vespers are here.

S.S.S.A.T.B. soloists from within the choir
S.S.A.A.T.T.B.B. choir of at least 16 singers
Renaissance band of seven players with the following instruments:

Revised and recorded 21-24 Jul 2008, Piffaro, The Crossing, with funding from the Pew Charitable Trusts and the Argosy Foundation. Released 28 Apr 2009 on Navona Records.

I have loved the Lutheran liturgy from childhood, even before I was aware of the concept of classical music. So I was thrilled when, during discussions with Piffaro, the idea was ﬂoated of a new composition inspired by the musical ﬂowering of the Lutheran Reformation. That idea became this Vespers.

Because so much new music was being produced in the early 1500s for these new liturgies (including excellent music by Martin Luther himself), and since so much of it is still in use, the Renaissance hovers over Lutheran music to this day. Certainly the sounds of the instruments composed for at the time—recorders, shawms, dulcians, sackbuts, plucked strings—are as congenial to the spirit and indicative of the boldness of this music now as then.

For a Lutheran Vespers, any number of Psalms on a seasonal topic might be used. During the weeks of Epiphany (the time of the ﬁrst performances of this Vespers), the Lectionary suggests Psalms emphasizing light, kingship, deliverance, and the appearance of a Savior. “Epiphany” Psalms are also used throughout the year, though, so concert performances of Vespers need not be restricted to January. For this is not a Vespers service; an actual liturgy may include many more sections than those used here. My intention was not to compose a liturgy, but to create a concert work infused with the spirit of this liturgical tradition. A “Deo gratias,” for example, would not often be as elaborate as the one here, and in any case would more properly be divided into separate “Benedicamus Domino” and “Deo gratias” sections. A Lutheran Vespers would probably include Luther’s “Komm, Heilger Geist” in place of the “Veni Sancte Spiritus” as often as not. My setting of it, which deletes all the words but the ending “Alleluia” makes this “Veni” more of an extra-liturgical Prelude. And more Psalms would most likely be included in a service.

The chorale, or Lutheran hymn, is the essence of the Lutheran musical gift to the Church. Be it a refashioned or newly composed melody for the new texts being written, the chorale tune is the musical lifeblood of Lutheranism. The hint of even a few notes immediately recalls text (and emotion) to the attentive congregant, even in purely instrumental works such as the Sonatas included here. The text is what drives Lutheran music. Typically Lutheran is the emphasis on hymns: “Wie schön leuchtet der Morgenstern” is used where a processional hymn might take place before the Introit, “Herr Christ, der einig Gotts Sohn” (in a setting for four, then eight, then 16 voices) is placed before the Magniﬁcat, and Luther’s own “Vater unser,” his versiﬁcation of the Lord’s Prayer in nine verses, follows the Magniﬁcat.

This Canticle of Mary, which essentially serves as the Gospel reading, along with most non-hymn texts, would be chanted in Latin in urban churches; Luther encouraged the use of Latin where it was known, while promoting the vernacular German for hymns and in areas where Latin would not be understood. While much of the music here is chant-inspired, only two actual chants are quoted, the “Veni Sancte Spiritus” and the opening of the “Deo gratias.”

Writing for Renaissance instruments presents the same challenges as writing for their modern counterparts. Repeated listening to live performances of these instruments, singly and in ensemble, is the only way to discover the sounds and possibilities. Playing and singing music from this period in an early-music ensemble has proven to be invaluable experience for me. But I am indebted to Piffaro for providing me with a wealth of information, such as production issues within the ranges, chromatic possibilities, and so on, which would not be obvious even to the astute listener.

There is one way, though, that writing for a Renaissance band—such as might have been available to the 16th-century composer—is unlike writing for an ensemble of “modern” players. It was common practice for many musicians of the time to be proﬁcient in more than one instrument. It exhilarates and challenges the composer to have the players of Piffaro at one’s disposal, each of whom can play any one of a variety of instruments at a world-class level. The possibilities for using these seven players and the twenty-four instruments we’ve chosen are endless. The masters excelled at varying texture (whether forces were limited, such as during the Thirty Years’ War, or not), and this is something to which I aspired.

The high standards and artistry of the professional singers of The Crossing have greatly inﬂuenced the vocal writing. Textures often shift among solo, tutti, and small ensemble singing. Modal harmonies are quite elaborate at times in the hymn settings, while there is much chant-inspired rhythmic flexibility in the Psalms, especially 27 and 113. The voice-leading in general is fairly independent, and there are large swaths of a cappella writing.

When one of the world’s premiere early-music ensembles commissions an entire evening of brand-new music, it has committed itself to an adventure into unfamiliar territory. Then again, many people love both contemporary and early music, and enjoy the experience of that which is beyond the standard repertoire. I commend Piffaro for having this vision, and thank them for allowing me to be enchanted again by the genius of the Lutheran Reformation.