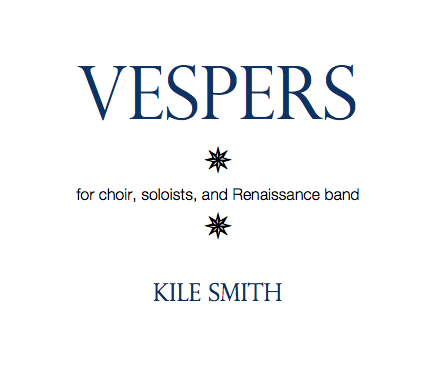 David Patrick Stearns of the Philadelphia Inquirer includes the premiere of Vespers as one of the top ten musical events of 2008 hereabouts. I’m surprised by this, and delighted by this, as  I have been surprised and delighted by the reactions I’ve gotten over the year to this wonderful collaboration with Piffaro, the Renaissance Band and The Crossing. Stearns downplays the idea of all such lists as being, at the very least, limited to what one can listen to, and of course he’s right. But it includes some ﬁne company with whom to rub shoulders. And we can all breathe relievedly, now that we didn’t make The Guardian’s year-end list of Top Ten headlines from The Onion, can’t we?

Vespers has indeed hovered over 2008 for me. This time last year, all the music was long finished and in the hands of the musicians. Not sure if “long” is the correct word, but the musicians had been getting bits and pieces  of it for months, the last of it being sent off a couple of weeks earlier, I’m recalling. All, that is, except for the instrumental In dir ist Freude, which I wrote three days before the premiere. We all thought the choir deserved a breather between Psalms 27 and 113. Why that obvious hitch had escaped our notice until then is one of those magical delights of premiering music. But I was glad for the chance to write for Renaissance guitar.

Then, the rehearsals leading up to the premiere concerts of January 5th and 6th. Then, in the weeks and months after, clips from the premiere showing up on YouTube (here’s one), the good news of grants received for a commercial recording, and the feature on WHYY with Ed Cunningham. All the while, I was writing other pieces (including, but not limited to this and this), editing Vespers, ﬁxing some little things, ﬁxing some big things (major reconstruction on Psalm 27), and writing some new music for it. One more instrumental before the Deo gratias was needed, more as denouement after the long Vater unser than anything else. And the Deo gratias needed expanding. Then, the recording came together at the end of July, which you can read about if you go here and nose around that page and previously. Then, the ﬁlmed interview.

Then, going through all the takes and putting the CD together, a task that had to wait a bit because Piffaro already had a CD in the pipeline that understandably had to be finished ﬁrst. While that was going on, I edited and re-edited the program notes and continued to ﬁx little things in the score, until everything was sent to Parma Recordings on December 1st. The score too, by the way: they’ll be adding a PDF of the full score to the enhanced CD. They’ll include recording session photos and all sorts of extra things on it.

Two items to clarify. One: Stearns has mentioned an Anglican sound to some of this, and this puzzles me. Well, I think I know what he means (that is, I think I know what parts might be so construed, now that I think about it); I just ﬁnd it funny. Funny hmm and funny ha-ha. Funny hmm because you never know what inﬂuences may crop up, nor in what manner. Funny ha-ha because I hear this music as so identiﬁably Lutheran that I can hear nothing else, and it’s just, well, it’s a good joke on me, I suppose. I’m still too close to it; what do I know. But to me, Vespers is Jägermeister and Anglican is sherry. Not that there’s anything wrong with that; sherry’s a ﬁne and noble libation. But it’s funny. Again, I think I know what he means; I don’t know for sure.

Two: could they ﬁnd a worse picture of me? No, you won’t see it here, nuh-uh, you’ll have to get the Sunday paper or go to the link and ﬁnd it yourself. I know it’s a cliché not to like pictures of yourself, but…I’m supposed to look, I guess, like I’m ruminating over a take heard through those headphones and all I see is a slightly dazed psychopath with the littlest hint of a twisted smile. Someone told me to relax and not take it so seriously, the picture’s good because it tells a story. A Stephen King story, maybe. I should feel better, as I often do, by reading Jeremy Denk’s blog. He reports similar bouts of agita over photographs. There, I feel better already.