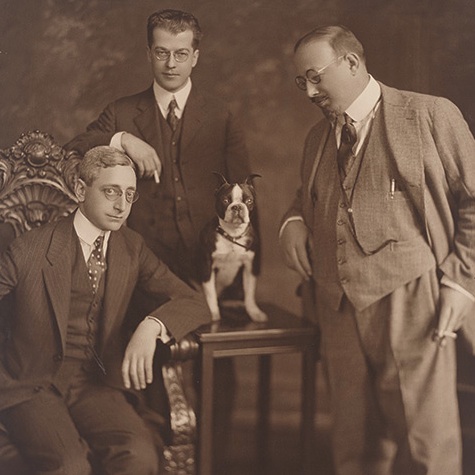 Such a long time ago; I hardly recognize myself

Tuesday, September 6th, 2011, will be my last day at the Fleisher Collection of Orchestral Music, after 30 years, the last 18 as Curator.

When I started as a part-time copyist in 1981, working on Louis Gruenberg’s music (pen and ink on vellum), I was getting my Master’s in composition from Temple University. Mrs. Morgan retired (Sadie, but no one would ever dream of calling her anything but “Mrs. Morgan”), I applied to fill her position, and in 1983 I became a full-time civil servant. That’s right, the City of Philadelphia once administered a test for music copying. In a year or so I was promoted to Copyist Supervisor, still copying but also overseeing the work of outside hires. Romulus Franceschini, the Assistant Curator, retired, and I moved into his job, Curator Sam Dennison retired and Fred Kent, Head of Music, became Curator for a few years, then retired, and I became Curator in 1993.

We doubled circulation and tripled income since then, not counting the gifts and bequests that’ve been entrusted to us, totalling more than twice the original Fleisher endowment. The number of titles has grown by one-third, to more than 21,500. We ran a concert series for nine years, then Discoveries from the Fleisher Collection started at WRTI, now beginning its tenth season. We produced a newsletter, and when the internet came along we began an e-newsletter. (We’ve spent years building up our email addresses, all from public sources. You’ll hear it bruited about that there are 1,800 American orchestras. Don’t believe it; we know of about twice that number.)

We helped produce a recording series on Albany, and now dozens upon dozens of recordings using Fleisher materials have been made by companies all over the globe. We continue to produce materials for contemporary world premieres and new editions of historical works. We’ve gone from printing our own music on ammonia-developed blueprint machines to large-format copiers to a digital, networked large-format printer. I can still smell the ammonia, though.

We converted the catalog after a long period of repentance, so all Fleisher titles are now searchable online. The goal of an integrated e-commerce system—with ordering, tracking, and searching by full instrumentation—is still to be realized, but we’ve made great behind-the-scenes progress laying the groundwork. We rewrote and continue to streamline every aspect of our music-lending procedures.

Fleisher’s been hit hard with staff cutbacks—as has the rest of the Library, as has everywhere—but I am blessed to work with the best people, nice folks who go out of their way to help patrons and each other. It’d be hard to imagine better coworkers than Stu, Abu, Judia, Saul, and Gary. I inherited a tradition of the best, most knowledgeable service in the best and by-far-the-largest lending library of orchestral performance material in the world. I am very happy to see that continue.

Then why am I leaving?

Well, I always wanted to be a composer when I grew up. I’ve been pretty busy at that for a few decades, but the opportunities (and deadlines) are piling up, so I figured it was time to take the plunge. I’ll still co-host Discoveries with Jack Moore and write up the shows, since everyone wanted to keep it going and we don’t know how long the transition to a new Curator will be. But it’s time for the next chapter to begin.

So that’s the main reason. There are others, but I don’t know if… oh, OK, here they are:

The Top Ten Reasons I’m Leaving the Fleisher Collection of Orchestral Music at the Free Library of Philadelphia:

10. I’ve read all the books.
9. The year I started was the same year Hosni Mubarak became President of Egypt. I have heard the voice of the people.
8. Can’t blame my problems on previous Curators anymore.
7. I talk to everybody but only Haley Joel Osment answers.
6a. I dropped my briefcase during my daily right-hand to left-hand briefcase exchange at the exact halfway point between the Library and Suburban Station. That’s never happened before.
6b. It just occurred to me that I have a daily right-hand to left-hand briefcase exchange.
6c. It just occurred to me that I know the exact halfway point between the Library and Suburban Station.
5. My exploratory committee says the 2012 field is wide open.
4. So you know how you’re behind somebody leaving the Central Library, and how they go through the automatic door and they just, you know, stop? And you’re like, “What, you can’t walk three more feet but no, you’re just going to stand there, and what are you thinking, I can’t walk through you?” Yeah, so I figure that if I leave I’ll never come across that situation in any other public building with automatic doors and that I’ll be happy then.
3. I used to know all the phone numbers for the orchestral rental publishers by heart. Then the area codes changed—not the numbers, just the area codes—and I can’t remember the numbers anymore. Wait, that was 15 years ago.
2. Stu’s told all of his jokes now and sometimes it looks like…I’m almost afraid to say it, but…I think he’s trying to learn some more.
and The Number One Reason I’m Leaving the Fleisher Collection of Orchestral Music at the Free Library of Philadelphia:
1. They’re starting to figure out what I do here.